“Star Wars” may be a space opera that takes place in a galaxy far, far away, but it’s inspired by earthly cinema from Westerns to Samurai influences. Given how many titles have been animated series, it is almost hard to believe it has taken this long for something like “Star Wars Visions” to be released. The anime anthology series brings seven animation studios to bring their signature style and unique vision of the Star Wars galaxy.

While most of the films and live-action streaming series have taken place within the Skywalker Saga, Visions opens the universe by stepping away from what we’ve seen so far to tell exciting new stories about all sorts of characters we’ve never seen before. It also expands the mythology to create something that is narratively fresh and also visually unique to Japanese animation.

Each episode, or rather short, devotes itself to a different character’s story within another corner of the galaxy. Some of these stories are direct homages to Japanese cinema, while others celebrate Star Wars through the anime medium. And there are those that do both. “The Duel,” a Kurosawa-inspired short that gives fans an idea of what Star Wars could have looked like if it was set in Feudal Japan, where a lone Ronin (Brian Tee) steps up to protect a village from a deadly Bandit Leader (Lucy Liu). The confrontation reveals a truth about the stranger that he had kept hiding for so long.

Of course, since there is no direct connection to the Skywalker Saga, many of these studios working on their respective shorts can interpret the Star Wars lore in their own way while staying true to the mythology that so many fans have grown to love. Each of these stories gives us a chance to see what happens when the narrative isn’t about the characters that we already are familiar with from the films or tv shows. Instead, they offer a unique perspective and explore exciting dynamics between the Jedi Knights and Sith Lords, droids, and even the lightsaber smiths.

What’s more, these episodes are more than straightforward hero versus villain or dark versus light stories that we are accustomed to seeing. They are also an in-depth exploration of the complexities and ethical conundrums that many protagonists encounter whenever they choose between one or the other. For example, in “Akakiri,” a tired Jedi (Henry Golding) returns to his forbidden love (Jamie Chung) to protect her from a Sith-like shogun (Lorraine Toussaint). But his haunting visions may be telling him he’s been on the wrong path. Other episodes can be more lighthearted and fun when it utilizes musical aspects like that very subtly titled “Tatooine Rhapsody.” This episode sees a scrappy band led by Jay (Joseph Gordon-Levitt), who must put on a show of a lifetime to save one of their bandmates from an adorable chibi Boba Fett and a cute Jabba the Hutt.

These studios offer seven unique stories, and because they all have their own signature styles, we can see how they all electrify the screen with their colorful visuals and engage fans with exciting stories. And because “Star Wars Visions” steps away from the Skywalker Saga, it is the breath of fresh air the franchise needs to avoid being narratively suffocating. And Kamikaze Douga, Geno Studio (Twin Engine), Studio Colorido (Twin Engine), Trigger, Kinema Citrus, Science Saru, and Production IG use their signature animation and storytelling styles to realize their visions of the galaxy far, far away.

Though these episodes are self-contained stories, it allows us to focus more on the characters on screen and the current stakes at hand, rather than the ripple effects it would have like some of the other films or predecessor tv shows.

While the episodes may vary in length and the stakes may be smaller in the grand scheme of “Star Wars,” they are significant to all of the characters in their respective stories. For example, “The Twins” sees its titular characters (voiced by Alison Brie and Neil Patrick Harris) in a mirror version of the Luke and Leia twin sibling dynamics. Rather than separate them at birth, the two byproducts of a Sith experiment hand find themselves at odds with each other when Karre (Harris) wants to break free of the chains of the Empire, but his sister (Brie) sees it at the faction as the ultimate power.

In “The Ninth Jedi,” the longest of the nine episodes that run at 21 minutes, is an almost perfect echo of the Luke and Rey story, of two protagonist dreamers who want to escape their lives on an isolated planet. But unlike them, Kara has a loving relationship with her father. Yet, she dreams of becoming a Jedi like the knights before her, even though she has had no formal training. Still, she cannot help but feel connected to the guardians of peace and justice.

And because each of the episodes is so different in story, style, and tone, it allows us to be fully engaged while imagining what a galaxy far, far away could look like through the eyes of different people – or in this case, different animation studios. For example, “The Village Bride” takes a look at the trauma suffered by a young padawan on the run and the choice she must make when she sees a peaceful planet overrun by a local warlord who uses decommissioned droids to spread fear.

“T0-B1” is one of the softest takes on the “Star Wars” lore, yet it brings out those adventure qualities that we see in films like “Pinocchio” and “Wall•E.” In the episode, the titular droid dreams of becoming a heroic Jedi but discovers a secret about his creator’s past that threatens their once-peaceful existence. The entire thing looks like a storybook come to life and can be seen as a gateway piece to introduce the young kids to the galaxy of Star Wars.

It will be interesting to see what sort of plans Disney has for “Star Wars.” Though they’ve got quite a slate of shows lined up, much of it is set in that familiar Skywalker saga. But some of the other episodes have the potential to be something more. “The Elder” centers on a pacifist Jedi and his restless Padawan pursuing a dark presence in a small village. And the joys of an episode like this are to see that Jedi and Padawan dynamic from a new perspective and how some unsuspecting elders could be villains in disguise.

“Star Wars Visions” isn’t limited to the events of the Skywalker saga, which allows the studios to take these stories in bold new directions. “Lop and Ocho” takes what we know about Star Wars and views it through the Japanese lens. The episode has a strong sense of family and conveying the warrior code by blending Japanese aesthetics and culture with “Star Wars” visuals. Here, the patriarchal head of a clan (Paul Nakauchi) clashes with his daughter (Hiromi Dames), the heir apparent to the family, who believes that the Empire can provide the progress the planet needs to survive and thrive. Meanwhile, Lop (Anna Cathcart), an outsider adopted into the family, is caught in the middle and must choose a side. What’s interesting about this episode is that it takes a look at the juxtaposes between past and present. It also portrays the concepts of progress vs. tradition.

While some of the “Star Wars Visions” episodes are fun-sized treats that are sweet homages to the franchise, others offer unique tales that give fans a new look on the space opera that they grew up with. These seven studios, all with their own sense of animation style, take these concepts and put a new spin on it, resulting in episodes that are more than just fan-service with an anime twist. They are stories that offer us a look at how diverse the galaxy can be. And not just through humans, aliens, and droids, but the aesthetics like architecture, costuming, ship and weapon design, and an understanding of the mythology through a new cultural perspective. 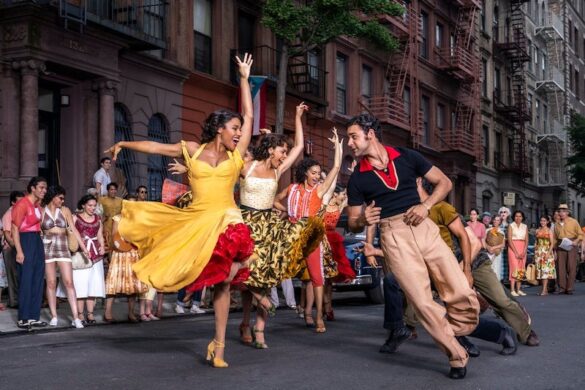