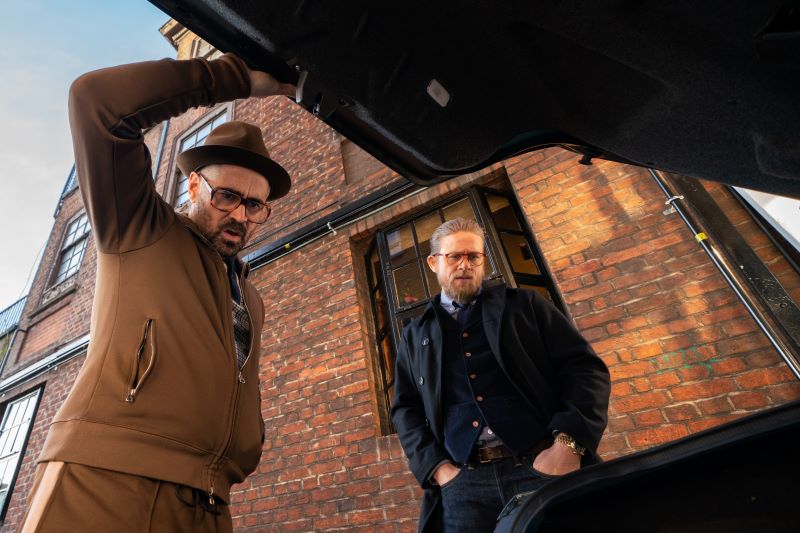 Guy Ritchie took a somewhat short hiatus from bloody hilarious British Gangster comedies to direct a gritty interpretation of King Arthur and a live-action adaptation of a Disney animated classic. But he makes his return to those brutish hilarities with The Gentlemen. And judging by the looks of it, he has not missed a single step. While it is a bit of a retread on films like Lock, Stock, and Two Smoking Barrels and Snatch, the filmmaker still finds a way to make things interesting by adding meta-humor and commentary on filmmaking.

Ritchie’s signature trademarks like the quick camera cuts, a wide array of colorful characters involved in interconnected plots, brutish colorful language, and wild kinetic energy that moves the action sequences all make its way into The Gentlemen. But what separates this from his previous works is that it takes on a whole new perspective. It is told through narration by Fletcher (Hugh Grant), a private investigator who blackmails Raymond (Charlie Hunnam), the right-hand man to the highly successful cannabis drug lord Mickey Pearson (Matthew McConaughey), for £20 million. Pearson is the face of the rags to riches story. Born into poverty, Pearson won a Rhodes Scholarship to Oxford University, but found his true calling in wheeling and dealing drugs to other students. But after years of building a successful drug empire, Pearson is looking to settle down and live a quiet life with his wife, Rosalind Pearson (Michelle Dockery). So Pearson plans to get out of the game by selling off his territory for $400 million to the subtly fey Matthew Berger (Jeremy Strong), an American billionaire whose flashy gifts and sense of style mask ulterior motives. However, the Chinese underboss Dry Eye (Henry Golding), wants in on getting Mickey’s business as well and makes all sorts of miserable attempts to get it.

As Fletcher narrates, he mentions what his price will be for his silence and that if Raymond pays up, he will throw in a screenplay. That’s then the film starts to feel more like a budding screenwriter trying to pitch his screenplay to a studio exec. It’s a surprisingly fun execution, especially when trying to figure out if what Fletcher is saying is the truth or if it’s hyperbolic.

But it is a story about proper criminals and gangsters trying to make the big bucks in a very dangerous game that is only played by alpha-males with giant egos. Considering that this is a storytelling film, there is plenty of exposition and dialogue-heavy moments. And in between all of that are the traditional high-octane action sequences that are bloody and grimy, yet elegantly executed. Of course, it’s not all showy. But sometimes transitions aren’t as clean as they are supposed to be. But with a story that revolves around a dirty business, I guess it works.

Even the criminals themselves are dressed to the nines as they are adorned with high-class sharp suits or rough plaid tracksuits. Costume designer Michael Wilkinson gives these characters a stylish wardrobe that helps distinguish who they are and define their characteristics. It reiterates how these criminals hold themselves to a higher standard with their etiquette. An etiquette that exists that exists alongside the law of the jungle, and it must be adhered to. All of this helps The Gentlemen lives up to its title.

It’s that kind of beautiful irony that helps bring some fun to a film that could have been dreadfully boring. See, it is a story that is filled with colorful, though somewhat flawed characters. These characters have no problem poking fun at just how absurd everything about the story is or take self-deprecating jabs about being in criminal business. One of the more pleasant ones is Colin Farrell’s Coach. He looks out for outcasts by taking them away from illegal activity and training them in the sport of boxing at his gym. In one scene, we see him goad a group of overly confident teenagers who are looking to cause trouble to fight him. Of course, he isn’t impressed by anything they do or say, and instead, he overpowers them with ease. However, when his boys get caught in a jam, he finds himself indebted to save them but also fixes the problem. Of all of the characters, Coach is probably the most honorable and respected.

Hunnam’s Raymond is cold and stoic, and someone who will get the job done despite his reservations about it. He’s the kind of person who is fully aware of the hazards of the situation, is prepared for anything, and cannot be caught off guard because he knows his adversaries better than they know themselves. For the most part, he stays in that same composed zone during a good duration of the film, but we all know that he is patiently waiting for the right moment for Fletcher to show a sign of weakness.

What is fascinating to see is how the scene goes from Fletcher’s storytelling to real-time. There is not a wasted movement during those real-time scenes as Ritchie drops clues and hints that directly connect to the story at hand with or without Fletcher’s knowing. And in between all of that, Fletcher manages to throw in a reference or to how films are made. It can be overly complex at times, especially when it feels like there’s a lot more going off-screen than on, but it eventually finds a way to come together.

But it is fun to see Fletcher try to break Raymond’s stoic appearance by overhyping the anticipation through his delivery and mannerisms. McConaughey brings in a calm and relaxed attitude as the big crime boss who runs the most successful weed dealing business in Britain. Hunnam also brings in some likability as loyal Pearson’s righthand man.

But despite all of that dirty whimsy fun, it has only one female character in Michelle Dockery. Though she is a confident and powerful woman with her own successful business, there is far too little of her. Although whenever she is on screen, she makes a subtle, yet powerful statement.

Sadly, the same cannot be said for the people of color in this film. Golding’s Dry Eye may be an ambitious upstart looking to take some of Pearson’s territory, but he and everyone around him is often the target of dated racial epithets and cultural stereotypes that are anything but humorous. Although, it is a nice change of pace for Golding, who looks like he is enjoying every minute of playing up the bad guy routine.

Though the slurs are a part of the language, it never gets in the way of the entertainment quality of The Gentlemen. It’s hard not to enjoy how the dialogue moves between these characters who are continually trying to establish their dominance in the criminal world. What comes after all of that, whether it ends in a bloody mess or something else entirely, is just a bonus.