Men are the worst. I could see how some can come to that conclusion considering everything they do to move the goal post, raise the glass ceiling, and gaslight women. And the newest trailer for Alex Garland’s Men visualizes the emotional manipulation and questioning that comes with gaslighting, along with some religious symbolism. 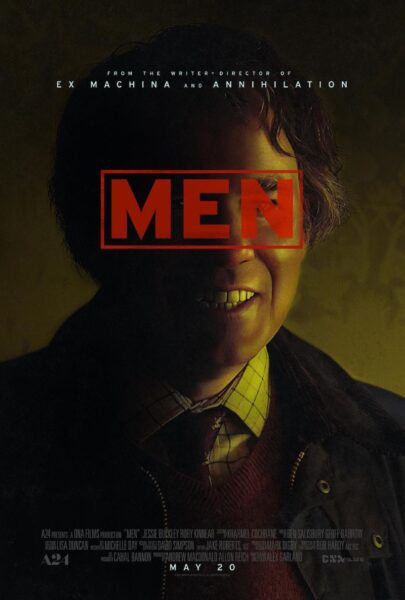 Throughout the trailer, we see that the film’s main character, Harper (Jessie Buckley) retreat to an English countryside to seek a refuge from a very personal tragedy. But what was suppose to be a time to heal turns into a hellish nightmare, as the townsmen starts stalk her and make her question her reality.

The film stars Jessie Buckley, who is currently nominated for an Academy Award for her performance in “The Lost Daughter,” as the film’s lead. Though the trailer is only a snipper of what’s to come, it shows us why the actor proves she is at the top of her game. And hopefully, the film gives the Academy more of a reason to nominate horror films. Because not only is this terrifying, it is also very relevant and yet visually evocative. Basically, I can’t wait to see this.

“Men” is Garland’s third directorial effort, following “Ex Machina” and “Annihilation,” both of which provided a darker and more horror slant to the sci-fi genre. And each of them had some underlining story to tell. So, it will be interesting to see how much deeper the rabbit hole goes in “Men.”

In the aftermath of a personal tragedy, Harper (Jessie Buckley) retreats alone to the beautiful English countryside, hoping to have found a place to heal. But someone or something from the surrounding woods appears to be stalking her. What begins as simmering dread becomes a fully-formed nightmare, inhabited by her darkest memories and fears in visionary filmmaker Alex Garland’s (Ex Machina, Annihilation) feverish, shape-shifting new horror film.

Written and directed by Alex Garland, “Men” opens in theaters on May 20.