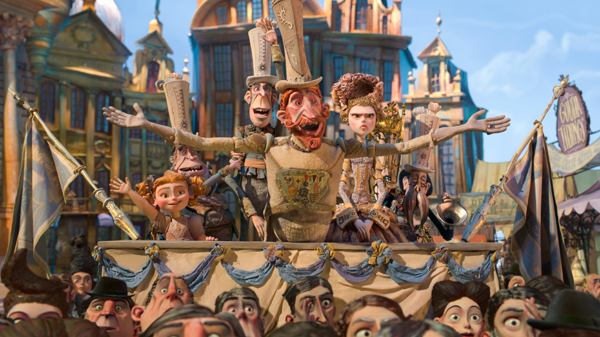 In Laika Animation’s newest classic The Boxtrolls, cheese means everything to the snooty citizens of Cheesebridge. A metaphor for wealth, class and power, it’s the town’s lifeblood. Mass panic (and fear mongering) erupts when they’re told by a villainous Red Hat Archibald Snatcher (voiced by Sir Ben Kingsley) that the titular creatures who live under the city streets have not only kidnapped a boy, but also are after their precious gouda, brie, and cheddar. As Snatcher and his cronies capture Boxtrolls, the Mayor’s curious and determined daughter Winnie Portley-Rind (voiced by Elle Fanning) finds herself in the middle of the evil conspiracy when she discovers the missing boy, now named Eggs (voiced by Isaac Hempstead Wright), has actually been lovingly raised by the Boxtrolls in the city’s sewers. Together the pair must devise a plan to save the Boxtrolls and the town from Snatcher’s campaign of terror. Havoc, hilarity and heroes emerge on their quest.

Since we had a blast at the film’s recent press day in Los Angeles, we wanted to share with you a few of the film’s best behind-the-scenes details straight from the stars themselves.

Elle Fanning, Sir Ben Kingsley and Isaac Hempstead Wright saw their characters before they recorded. Fanning says, “The clothing style changed a little bit, but she had the red curly hair and the stomach. Each time I’d do the recording sessions, they’d have a little more footage to show me. They’d be like, ‘Oh! We found Winnie’s walk today.’ It’d be two seconds, but it was neat to see the progression.” Kingsley states, “That was an enormous help. I saw the body they wanted the voice to come out of and that was a terrific help.” Wright thinks it didn’t help inform his performance, but that it was, “the coolest experience. It was like a Willy Wonka’s Chocolate Factory, getting to go in and see all the people playing with puppets for their jobs – which is probably the coolest job around.”

Sir Ben Kingsley found Snatcher’s voice in an unconventional manner. Leave it to the Oscar-winning actor to take a different path in order to find Snatcher’s voice. Wright calls the experience, “intense. We were in a very tiny box in Oxford. He used this reclining chair to get the voice from where he wanted it. That meant that most of the studio space was taken up by that. I was in a corner and he was there with his booming voice.” Kingsley states, “There’s a difference in how I record and how I allow my voice to come out of my body. Also, I know any physical mannerisms I have are a waste of time. It’s better if I be as still as possible and allow all my energy and all my imagination to go out of my body and into the microphone. All the bowing, scraping and posturing I make vocally, it’s all there.”

Elle Fanning was introduced to Laika through sister Dakota on Coraline. Fanning states, “She worked on Coraline for seven or eight years. I feel like my whole life I knew about stop-motion, I knew about Laika because she was involved in it for so long. She was always going to do the voice work when I was little.”

Snatcher isn’t a villain – or so says Sir Ben Kingsley. And he’s quick to correct that notion. “He’s ambitious. It can be a very corrosive thing. I think he feels displaced. Class and hierarchy are very important to him. He feels, he knows, (which is perverse because he’s perverse) he wants to join a club that will never have him as a member. The more he’s rejected, the more he’s in pain. The more he’s in pain, the more he’ll kick back. That’s really where the violence and the villainy comes from – the desperate hollowness inside him that will never be filled. He’s addicted to that which will destroy him. That’s a wonderful symbol for, if you’re addicted to power, it’s gonna get you.”

Monty Python’s Eric Idle wrote “The Boxtrolls Song” for the film. Directors Graham Annable and Anthony Staachi say it was kismet as they went out pitching the film “as if Monty Python made Oliver Twist.” Staachi says, “It had that kind of crazy, anarchic tone. When it came time to write a song we thought, ‘We got Sir Ben. Let’s try for Eric Idle.’ What intrigued him was the political undertones of the fact that Snatcher is demonizing this whole community to obtain power for himself. He liked the historical precedence. There always was a tooth – a political element – to their satire. He very quickly wrote the lyrics to the song.” Annable chimes in, “It was an amazing moment in the project. In two days, he’s playing live on the phone the actual song. He absorbed everything we said and turned it into this entertaining song.”

Elle Fanning and Isaac Hempstead Wright found the reaction vocals the most challenging. “I kind of got embarrassed. After you do the scenes each session, they give you a list of sounds – grunts, screams and whimpers. It was so weird. There’s one where Snatcher is covering my mouth and I had to do it to myself and continue to try to talk. All these people were just looking at me.” Wright took away a slightly different experience. “Those were really good fun actually. They’d be right at the end when you’re quite tired and you could have a bit of a laugh whilst doing them. It was always a bizarre end of the day.” 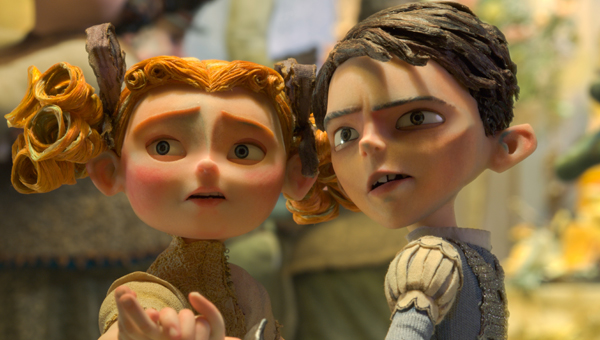 Laika uses every bit of footage they shoot. Wright says, “They have ten seconds at the end of either way of a shot so the editor has some leeway. But their CEO [Travis Knight] would kill them if they didn’t use it because it’s so expensive and it takes so long to do anything.”

Elle Fanning and Isaac Hempstead Wright were able to record scene together. When actors record their voice work, they aren’t typically recorded acting against each other. However, that rule is sometimes broken depending on the director’s intent. Fanning valued that time saying, “Most of the time I was by myself, but with Isaac, we had a session together – the scene we were talking about our fathers. That was more of a softer, more emotional scene, so it was good we could play off each other.” Wright states it helped him immensely. “When you finally do it with the person you’ll be doing it with onscreen, it comes to life because that’s how it will be when the audience watches your performance. That was great.”

Sir Ben Kingsley really sang Madame Frou-Frou’s song. He says, “I did sing the original recording. I think they’ve added a Broadway singer. I think it’s slightly mixed now, but it sounds very much like what I recorded but I’m being mixed in with another voice.”

Elle Fanning and Isaac Hempstead Wright kept Boxtrolls souvenirs, but Sir Ben hasn’t received his yet. Though Kingsley states he has yet to receive a memento, Wright says, “I’ve got some faces of his [character Eggs]. With all of his various printed faces, he can make 1.4 million different facial expressions. I’ve got six of those.” Fanning mentions she has, “a statue. My sister has a CORALINE and I have mine.”

The Boxtrolls opens on September 26.

I want to see this movie!!! Cool facts!

I’m not sure where you pulled your quote from, but none of the singing on “The Boxtrolls Song” track was done by Kingsley. The entirety of the song was sung by Broadway and film actor Sean Patrick Doyle, voice matching Kingsley’s spoken performance. Kingsley only voiced the spoken words “poor baby!” which appear mid-song.