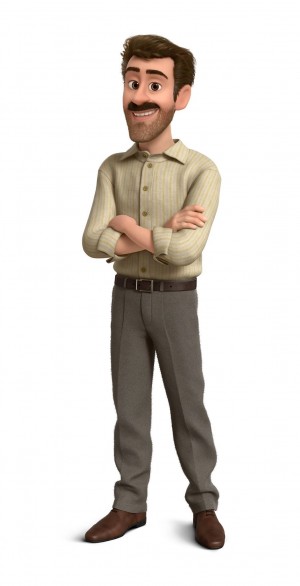 Here is a fun interview with the handsome and cool Kyle Maclachlan who plays Riley’s Dad in Disney Pixar’s Inside Out. He talks family, working on the film and he shared a strange childhood story about pizza.

Q: So as a Dad yourself, how much of the Character is you because this is kind of a normal Character departure from what you normally play?

Kyle MacLachlan: It was fun to do this guy because being a Dad myself, I was able to bring a little bit of my relationship with my son in and it was encouraged by Pete and Jonas and Ronnie. They wanted my personality so I was happy to try different things. Some worked, most didn’t but it’s always good to throw them out there just ideas.

The process is strange cause you’re sitting with a Microphone and you don’t have anything visually to work off of. So, Pete would feed me all the information and what was happening in the scene. I would read it and then I had to go into my head and play it out in my head. It was like I was shooting my own little movie. You begin to just put it together in your brain and so that was the process which I find fascinating.

Most people I think would be bored to tears but I love just how to interpret those words in the most interesting way, hopefully so that’s the difference between doing it in front of the camera where you’re actually just walking through it and you can feel it yourself to just playing it out in your head as you go so I hope that answered the question but that’s the process.

Q: Do you feel like you can see the emotions in your head? Do you see this differently now?

KM: I totally see it in my son. He’s coming up on 7 so he’s still trying to figure out how they all work together. Joy is the dominant one for him as well but he can bring in some disgust with attitude, which I’m sure he’s picked up at school. He definitely has the silly gene from me. And that comes from my Grandmother in fact. You begin to see and recognize, not only in him but in other people as well. I was doing an interview earlier where the Writer said, “why don’t you take your hand off the Anger button to his son?” And I was like OK, so maybe this will enter our consciousness in a whole different way.

Q: You need a Babysitter for your almost 7 year old son. If you have to choose from the 5 emotions, which one would you want them to have?

KM: Well the Protective Dad which they fear because that would keep him from doing anything but then he wouldn’t experience everything that I would want him to experience. I think Joy. I think kids are pretty resilient, and if they got into trouble, they’d figure a way out. 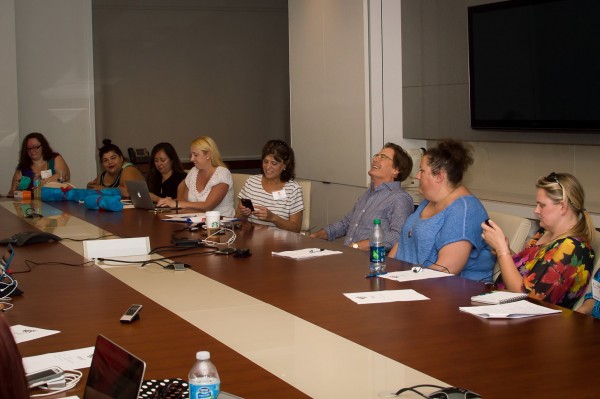 Q: What do you think the Audience of Dads will take away from this?

KM: He is a soft spoken kind of Dad. He’s a gentle Dad. And I think really attempting to connect with her, to understand what is going on in her brain. The inspiration of course was Pete’s daughter and trying to understand where this, vivacious outgoing joyful little creature went when she turned 11. so I think just giving your kids a little bit of space to figure it out I think would be good. And also I think, one of the things in doing the scenes with her, I attempted to connect with her.

Q: How long did the voice overs take from beginning to end?

KM: They were roughly two hour sessions. 5 or 6 of those over the course of a year, yeah. It was fun because I would do my thing and then it would go away and then 3 – 5 months later, we would do another version, slightly more refined version, and they would have more visual stuff to look at which was helpful. And then I can also tweak it a little bit. I was kind of expecting to go in and have these pages and pages of work and it wasn’t really that demanding.

It was really the specificity of it so we worked really hard on each little moment and each little piece of the sentence, yeah.

Q: What’s the strangest thing you had on Pizza?

KM: Well to part answer. I like the Canadian Bacon Pineapple topping. But the more interesting answer, when I was in a Marine Biology Camp, 8th Grade maybe, 9th Grade, we had to make dinner, our own dinner based on the ingredients we found in water. So whatever we found in tide pools or in the water, we could catch, we had to make our own Dinner. And so we made Pizza with a variety of different Molluscs on top of Pizza and we had to chew things that I didn’t really know what they were.

And but we stuck it on a Pizza. We made it on dough with tomates and then stuff on top. It was challenging so that was one of the weirdest things. Yeah funny that I remember that.

Q: How did you get involved in the project in the first place?

KM: They came to me through my Commercial Agent actually. They talked to her and she had this for me and I was like, that sounds very interesting and Pixar of course, I was so happy. I didn’t really know what to expect and what they needed. And um, had such a lovely first meeting wwith Pete Doctor and Jonas and Ronnie del Carmen, and they just were grateful and I was grateful so it was a good mix. So yeah.

Q: Has being a Dad shaped the way you take on new roles?

KM: Definitely. It’s added another dimension of consideration. How is this gonna affect my family both in my being around or not being around and also is it something that I’m comfortable putting out there? Do I want to carry whatever remnants of that work environment back home with me. I’m not one of those people that clings to stuff, that needs to be engaged in the part 24/7. That said, certain scenes require that when you get to work that everything else kind of disappears and you really stay in that focus for the run of that scene. And then when the scene is over – I like to just drop it all away, just let it go.

* I participated in an all-expense trip hosted by Disney, Disney Channel and Disney XD. Photos provided by Stacy Bell Molter of www.fancyshanty.com.