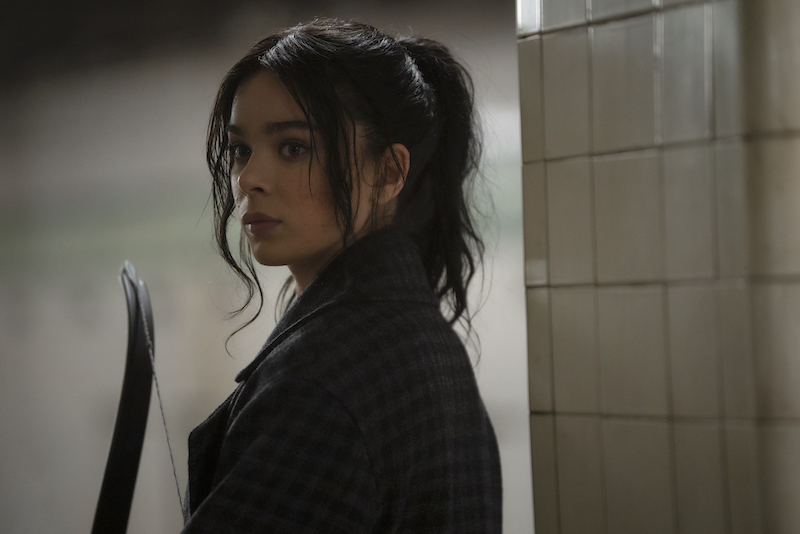 In the past 13 years, Marvel Studios has given many of its top-tier heroes and fellow Avengers some standalone films. Except for one, Hawkeye, Clint Barton (Jeremy Renner) has primarily played a supportive role as the Avengers’ main archer. But now he will get a show of his own in “Hawkeye,” where Clint finds himself reluctantly teaching Kate Bishop (Hailee Steinfeld), an eager protégé whose family may or may not have ties to the criminal underworld.

ThatsItLA had the opportunity to join their fellow journalists at the “Hawkeye” virtual press conference to discuss where Clint is now in a post-blip world, what Kate Bishop means to Steinfeld, and more.

Given that “Hawkeye” is the first limited series to focus on the founding Avengers, it gives audiences and fans the time to see the title character within a new visual medium. “Well, primarily, it’s Jeremy Renner. You want to see more Jeremy Renner. You want to see more of Jeremy Renner and more of Jeremy Renner. And that goes back to the earliest days,” Feige said. “The trust that Jeremy had to jump into the MCU before the moderator said things like,’ Welcome to the MCU.’ It was, “Hey, you want to do this thing with us? It’d be pretty cool. And I think it could be neat.” And he said yes. Then he won an Academy Award, and he still said yes. And I thought that was pretty cool.”

“But they were relatively small obviously, and in ‘[Age of] Ultron’ we saw a little bit more. But it was always the intention to expand the character’s history. And also the Matt Faction comics, which I’m sure people have been spending a lot of time talking about, over these last few press days was a big tonal inspiration for us,” Feige continued. “And seeing that and this new dynamic and their moments within all of Jeremy’s appearances, where you see this reluctant mentor under the surface.”

Though Renner’s Clint Barton did provide plenty of quips and scene-stealing moments, the one scene that Feige knew Hawkeye deserved his own show goes back to “Age of Ultron.” “One of my favorite scenes in all of our films is the scene with Clint and Wanda in Sokovia. When he basically says you go out that door, you’re an Avenger, and motivates her to join the fight,” he said. “And that was the kernel of what of how we could connect our MCU incarnation of Clint Barton into the Matt Fraction, storyline, and the relationship issue.”

Though the limited series centers on Hawkeye and Kate Bishop, the supporting characters help bring more of a dynamic to the show through their exciting and complicated relationships. For Vera Farmiga, who plays Elanor Bishop, Kate’s mother, it felt good to be pitched to be a part of something so beloved by many worldwide.

And Farmiga has plenty to offer other than just being a typical on-screen mom. “I love archery, just hands down. I am an archer.  You guys don’t know this about me my first job, but I played an archer with Heath Ledger in a series called ‘Roar,’ where I had my bow and arrow, and I’d have my 40-lbs pull-weight arrow, and I’m good at it, to be honest with you.”

And though it may not look like we’ll see Elanor shoot any arrows, it seems like “Hawkeye” explores something more complex and dynamic between the mother and daughter relationship. “If I wasn’t going to be wielding that bow and arrow, I just wanted to be next to someone with True Grit,” Farmiga said. “I have marveled at this young lady since that first movie, and I also loved this sort of this very delicate and complex maternal relationship with daughters. It is a tricky sport, raising a successful daughter, you know, especially when the daughter and the mom have different ideas of what that success means.”

“We learn about who we are based on our relationship with our mommies, who we want to be, and who we don’t want to be,” Farmiga added. “I think Eleanor does see herself as a kind of superhero. She is in the business of helping and keeping people secure. Having a daughter who has tenacity, who is very powerful,  and has a lot of prowess, but also a lot of recklessness. All mothers try to help their daughters channel that power into something more effective, you know, and certainly that’s the big lesson for us.”

As for the character dynamics, you can see that playful banter between the overly eager champion looking to impress the reluctant mentor who wants to spend time with his family during the holidays. And Renner was excited for the fans to see that dynamic play out in the limited series. “There are characters that could be polar opposites in a lot of ways. But then they have a lot of congruent values and belief systems and skillsets and things like that,” he said. “And it’s a wonderfully complicated relationship, or friendship or partnership, all these types of things. You’ve heard all sorts of labels on it. But it’s already kind of set up that way. And I think you can put these two characters in various different scenarios, and it’s going to be a winning scenario.”

And “Hawkeye will hone in on that winning combination throughout the series. “It was a very fun sort of figuring out as we were going sort of the evolution of this dynamic in this relationship,” Steinfeld said. But, I think ultimately, there’s a really true friendship there and an understanding. Kate sees Clint as someone, despite his past, who wants to do good and wants to help people, and that’s all she wants to do in life. And she’s inspired by him and motivated by him and wants to be at his level and is very overeager, and he puts up with a lot, but she really delivers at the end of the day.”

And this wouldn’t be the first time that we’ve seen a “Spider-Man: Into the Spider-Verse” actor make the jump into the live-action MCU. “I feel so honored to be a part of both projects. They’re characters that have similarities, but they’re very different. And of course, one is animation, and one is not. And two completely different worlds,” Steinfeld said. But I always love that I do find the characters that I have played in the past do have this sort of consistency in being these young women who are strong-minded, have a point of view have an idea of who they are in this world, and they really stop at nothing to get what they want to achieve. I think that both Gwen Stacy and Kate Bishop are proof that if you set your mind to something, you can really achieve great things.”

While the show does lean into the mentor and mentee relationship between Clint and Kate, there were also some other forms of advice Renner bestowed to Steinfeld to help her navigate the production of an MCU project. For me, I know I just wanted to communicate with her that I had her back and that there’s going to be a lot of strange things that go on. It’s different than other types of filmmaking, and I want to let her know that she was alone, and I had her back and give her the answers if she needed them,” Renner said.

For Tony Dalton, who plays Jack Duquesne – the Swordsman and Hawkeye’s mentor in the comics – he wouldn’t reveal anything about the trajectory of his character, who he describes as a family friend. But he did drop a few hints, which you will see in the first two episodes. I took some fencing back in the day. I don’t know why,” he said. “It took some fencing and we did a whole bunch of stuff there with the stunts and everything was great. It was good. Good fun.”

But the one person that Feige and Thomas spoke highly of was Alaqua Cox, who plays Echo. Set to appear in a future standalone series in the near future, Echo is a deaf Native American and the adoptive daughter of Kingpin and ally of Daredevil. Though it has yet to be confirmed if either of those characters will appear. For now, Dalton praised the actor’s work ethic saying she has an “amazing determination” and despite the fact that she’s never acted before, she was “completely unphased,” adding “She kind of walked into this universe like she always should have been there.”

Feige said something similar “It will be fun to see the audience discover Maya over the course of the series and then in her own series later.”