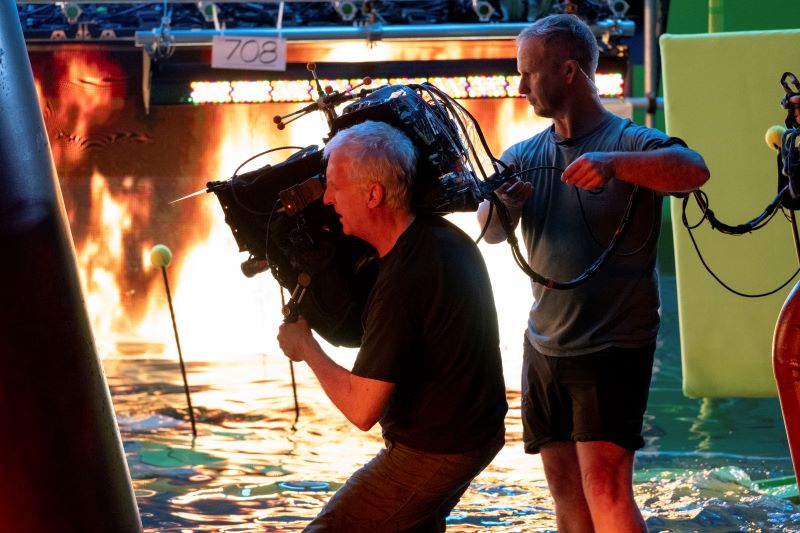 In the day and age of sequels and prequels, a global box office smash like James Cameron’s “Avatar,” which grossed over $2.9 billion worldwide, would normally get a sequel green-lit immediately. Of course, that would happen, but it would take over a decade for a sequel to hit theaters. Now the filmmaker is back for a sequel, “Avatar: The Way of Water.”

The film returns to the world of Pandora, where Jake (Sam Worthington) and Neytiri are now raising a family. However, when the human threat returns and wages war on their home, the two must journey to unknown parts and connect with other Na’vi tribes to strike back while also trying to stay alive and face uncertain tragedies.

ThatsItLA had the chance to join their fellow journalists and participate in the “Avatar: The Way of Water” global virtual press conference, where Cameron talked about why it took so long to make his film and the themes that audiences can expect to see in the highly anticipated sequel.

With major blockbuster films breaking records at the box office, it seems obvious that audiences would want to see more of those characters and that world. But when that sequel does come, it doesn’t live up to expectations, which may explain why Cameron may have been leery about doing “Avatar: The Way of Water.” “Well, Steven Spielberg didn’t do a sequel to “ET, the highest grossing film, and it’s in its time, right? It’s not a no brainer,” Cameron said. “Do you want to call down the lightning strike again, in the same spot, you know, it’s a lot to live up to.”

So Cameron had to rely on his “amazing cast,” find ways to bring back some of his favorite actors he’s worked with in order for the sequel to work, and create inventive ways to expand Pandora’s populous. “We also have this amazing family of artists and troop players. All the other actors, when you see a crowd scene in this movie of 100 people, it’s the same 10 actors just moved around, right,” he added. “So it’s a small group, and we kind of really get to love each other and enjoy the process. And Kate got to join that, and feel that vibe, as well. And that was a big incentive for me to come back and do this all again.”

But Cameron knew that a sequel required more than just bringing back a few familiar faces for another sci-fi actioner. It had to have depth and heart to it, and maybe a few unexpected twists as well. “I think it’s important for a sequel to honor what the audience loved about the experience the first time, but also to get them off balance, you know, do things that they don’t expect,” he said. “There are a lot of surprises in terms of where the story goes, in this film that we’re not putting into the trailers and the TV spots.”

And producer John Landon echoed Cameron’s sentiments by going into what themes the film explores. “Themes are what you leave the theater with, and this movie has heart has emotion,” he said. “It also has a message about our world, not just the environment, about people about accepting people for their differences. In the movie, Jim wrote in the line ‘ayngati kameie,’ I see you. And we want people to know that they’re seen and to see others that same way.”

But for all of the excitement that this sequel has generated, Cameron credits many of the artists who spent countless hours making “Avatar: The Way of Water.” “I work on the minutia all day long, 1011 hours a day, but I had to stand back and see the whole thing. And what struck me was the work, the performances, the people. I look past all the spectacle, all the design, all the creatures, and all that. I look at this, and I’m not only proud of the work, you got to start with that, right? But I’m also proud of the entire downstream team over 1000 people who preserved it so eloquently,” he said. “But if you can’t trust the downstream process that it’s going to come through in the CG characters, then what’s the point? So I’m, I’m very, very proud not only of what we created together but how that was preserved into these final fantasy characters that are not human. You know, they’re very physiologically different from humans.”

Starring Stephen Lang, Kate Winslet, and Sigourney Weaver returning in a new role, “Avatar: The Way of Water” opens in theaters on December 16, 2022.