Top Posts
Shazam! Fury of the Gods!: Meet the Shazam...
Dungeons & Dragons: Honor Among Thieves is Campy...
2023 Oscar Nominations: See Full List of Nominees
Knock At The Cabin Featurette Looks Behind The...
j-hope IN THE BOX To Follow BTS Dancing...
Home entertainment Staying Cool with the Cast and Crew of “Frozen II”
entertainmentNew 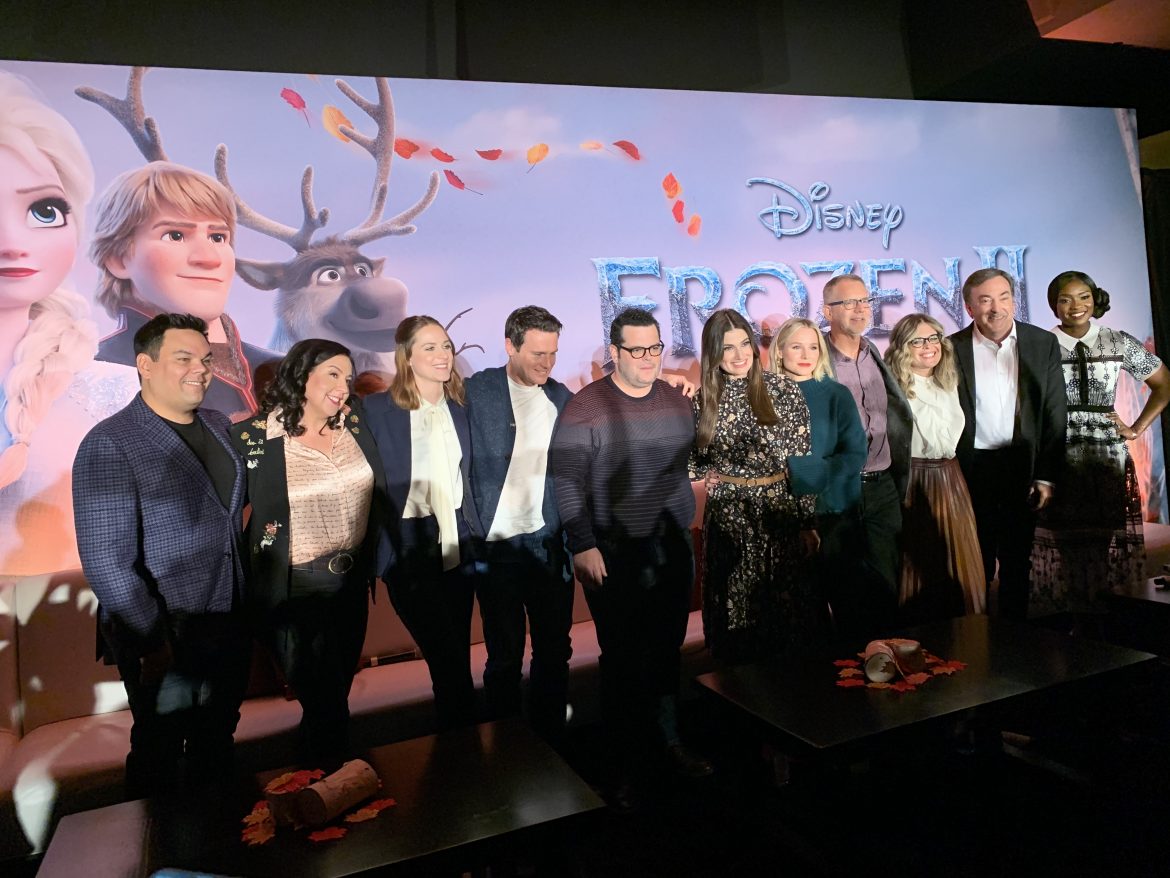 It’s time to return to Arendelle! It’s been six years since the first Frozen and the anticipation to revisit our returning friends, Anna, Elsa, Olaf, Kristoff, and Sven couldn’t be higher. Yes, folks, Frozen II hits theaters this Friday! And to commemorate the release of the film, the cast and crew, including stars Idina Menzel, Kristen Bell, Jonathan Groff, Josh Gad, along with directors Jennifer Lee and Chris Buck, took to the stage amongst members of the press to discuss where the characters are today, and what surprises are in store for fans when they see the new film this weekend!

The team of Lee and Buck was asked to discuss the journey towards making the film.

“I think it really started about a year after the [first] film came out,” stated Lee. “And when we saw the characters animated again, we got emotional. We said we missed them…And one question kept coming up, which was why did Elsa have powers. And then more questions, such as what the girls were meant to do with their lives. They’re on the precipice. They finally got together. Where were their parents going? And it just kept rolling…and we naively just said, ‘we have more story to tell.’ And we weren’t ready to leave this world. We love this world. Not knowing what the journey would be…there’s never been a second musical to a feature film. So we were going into the unknown completely.”

“We got lost in the woods along the way,” joked Buck. “And everything will make more sense when I’m older. And if I just do the next right thing, somehow all will be found,” he said slyly riffing on every song title from the film.

Menzel and Bell were then asked what it was like to return to the roles of Elsa and Anna, which have meant so much to so many people.

“There’s the macro and the micro,” Menzel began. “It’s returning to this family. This beautiful film, and this project that has gifted us with so much joy in our lives. And connecting with another human like Kristen, a sister. And making beautiful art that we’re proud of. Then there’s taking it out into the world. And from my perspective, getting to go out on stage. It’s never really ended between the first and second, because I’m singing the music from it all the time all over the world. And looking out into an audience and seeing people of all ages really singing this music and reminding me how they’ve been touched by it, and how they’ve learned celebrate that thing inside them that makes them feel extraordinary, all over the world.”

“And I think that it definitely really ended,” replied Bell. “I’m very similar to Anna. I’ve infused a ton of me into this character. Maybe moreso than I’ve ever done. And similarly…since my early 20s I’ve been living for Idina! She was obviously on Broadway really young, and she blew up. And I remember I was studying in New York, and going, ‘What?’ She’s my idol!”

During the conference, Gad was also asked about his admiration for Idina Menzel.

“I remember seeing her in Rent when I was in high school. And fell madly in love…She’s incredible! And in college I saw her in Wicked. And I was like, ‘This girl is one of the most talented human beings alive!’ I was obsessed with her. And I was like, ‘I’m either going to marry her, or do an animated franchise with her!’” Regarding his failed marriage plans, Gad continued saying, “It didn’t work out. I’d say she goes for a different type…the coolest part about watching Frozen and Frozen II with my daughters, is that they have these guys as their role models. That is just the most incredible part of this journey. I get to share this with two girls who get to look up to two fiercely independent Disney princesses.”

One of the biggest standout scenes in the film is the long-awaited Jonathan Groff musical number in the film—something that was missing from the first film. When asked about the song, Groff had this to say.

“It was such an amazing experience. Bobby and Kristen had said to me in the beginning that they wanted Kristoff to have a song. And I thought that was so sweet of them to say, but how does a mountain man break into song? I’d so much rather hear Idina sing an eighth ballad than that,” he joked.

“Someone made the point yesterday that oftentimes it’s girls who are singing about pining after a man…And like the first Frozen and this one, it subverts that. And so here’s a man pining after a woman, trying to come to terms with his emotions and singing about it. And I think that making the true love in the first film about familial love, and making the center of the story about two sisters is part of what Frozen does. It continues to challenge your expectations of what the stories are.”

We couldn’t agree more with him or with the rest of the cast, as the Frozen franchise has certainly proven itself to be a definitive leader in what animation studios should aspire to be musically, technically, and thematically, taking the medium into the unknown and beyond.