One of the best things about having Marvel Studios develop a streaming series for some of their characters on Disney+ is that we get plenty of episodes to explore arcs and flesh out the character development. And for “She-Hulk: Attorney at Law,” fans get to see Jennifer Walters Tatiana Maslany) navigating her responsibilities of being a successful lawyer with the duties of being a superhero. The latter of which she did not ask to be.

But when Bruce Banner’s (Mark Ruffalo) blood accidentally enters Jennifer’s bloodstream, she gains all of the powers of being a Hulk, minus the anger and rage. And though she tries to stay away from the superhero drama, she finds herself in the thick of it. As such, she works as an attorney specializing in superhuman-oriented legal cases.

ThatsItLA had the opportunity to sit in on the “She-Hulk: Attorney at Law” virtural press conference to hear what Maslany, and Ginger Gonzaga had to say about subverting expectations and perceptions of the female superhero series.

“Going to the courtroom is really exciting. What’s so great about the show is that it has those huge Marvel elements to it. Like there are big set pieces. However, we also deal with She-Hulk swipe dating, and we deal with her helping her dad carrying stuff into the garage,” Maslany said. “It’s those little sweet moments that got me excited too.”

Calling “She-Hulk: Attroney at Law” a legal comedy would be too easy. Upon further viewing, the series is also an exploration of Jennifer Walters as a person, who just so happens to have these powers that turn her into a green 6-foot-7-inch superpowered hulk. Luckily, her friend Nikki (Ginger Gonzaga) sees that there’s more to Jennifer than her superhero persona.

“I love that they are female friends, and they care about each other and have some sense of emotional maturity in their life,” Gonzaga said. “It’s a really good balance because Jen is by the book, knows what she’s doing with her life, and has all these goals. And Nikki is this reckless and free, but in a fun way. So I can lite these fires and encourage Jen to become She-Hulk. Which is why if she does save the world, you can thank her good friend Nikki.”

“Our show is very hilariously human because of that humanity and soul that she brings to it,” Gonzaga said about Maslany’s chemistry with the cast and crew. “What’s fascinating to watch is the difference between the Hulk and She-Hulk. The Hulk’s initial struggle is that he’s out of control when he’s the Hulk. It’s primitive. She is conscious of this other form, and it’s uncomfortable. So you’re watching this super thing, who’s very aware of how she is in the world and how she’s being viewed when she’s special, when she’s different and when she has powers. So it’s this other perfectly cerebral and complex and funny that Tatiana is so gifted at that’s cool to watch in comparison to the Hulk’s journey.”

Maslany recalled her first scenes with Gonzaga swipe dating and giggling as their characters who are friends. “It felt like, ‘oh cool. So this is what the show is,'” she described. “It’s a culmination of the space we were provided and the safety of that space. And the script, when you’re reading those lines, it’s just innate, and it flows, and it’s real.”

“I think because it zeroes in on like real human dynamics,” Maslany added. “It is easy then like when Mark comes to set, and it’s like Mark, and I are doing these like kind of sibling scenes, you know scenes, where we’re like, you know ripping each other, but also like they love each other very much. It was a very easy dynamic to bring to the camera because it made sense. I feel like a lot of the characters in this show have that like ring of truth that’s very easy to bring to the camera.

And because “She-Hulk: Attorney at Law” is connected to the MCU, it means that we get to see the family dynamics between Bruce and Jennifer. So, bringing Mark Ruffalo into the project was essential for the story and staying true to the comics. And Maslany got to see what kind of an impact playing a character for so long has on an actor:

“Mark was open to whatever my process was with coming to ‘She-Hulk.’ He never was prescriptive,” Maslany said. “But one thing I did witness him do was laying down as Bruce, and he gets up Hulk.”

” A Kip. It’s called a Kip, I think. It’s a thing where you lay down, and you stand up without moving your arm. It doesn’t look like it’s humanly possible,” director Kat Coiro added.

“Yeah, it looked completely inhuman, and I was like, “Oh, that is, like, what ten years of playing this character and physically embodying him and being so inside of him, you get to do cool stuff like that,” Maslany added.

While most would believe that Jennifer Walters is better equipped to handle her superpowers with her current lifestyle, Maslany was interested in exploring that inner conflict. “She’s built this life for herself that she does not want to let go of. She worked so hard to be a lawyer, and she has to constantly prove herself. So, she’s in this path. And when this thing happens to her, she has to contend with this whole other perception being placed on top of her and expectations societally of how she should be and who she should be. So to navigate those two versions of the outside perception of her, that to me was super interesting.

“When I read the pilot, I was like, ‘I want so badly to audition for this because it’s so funny and so mundane and small in a way that I’ve always dreamed of watching a superhero show that had the between moments. The moments where you’re like checking your phone. That to me engaging cinema,” Maslany said. 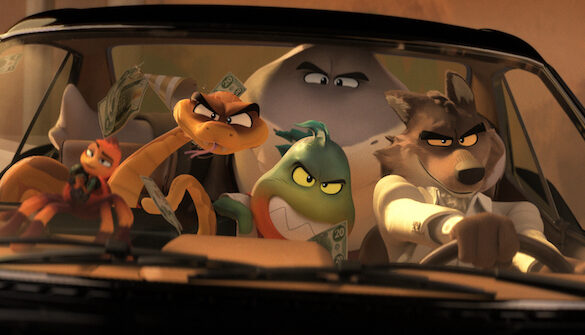 I just watched episode 1 and really enjoyed it Michael. Fab acting and I had fun following a light storyline.