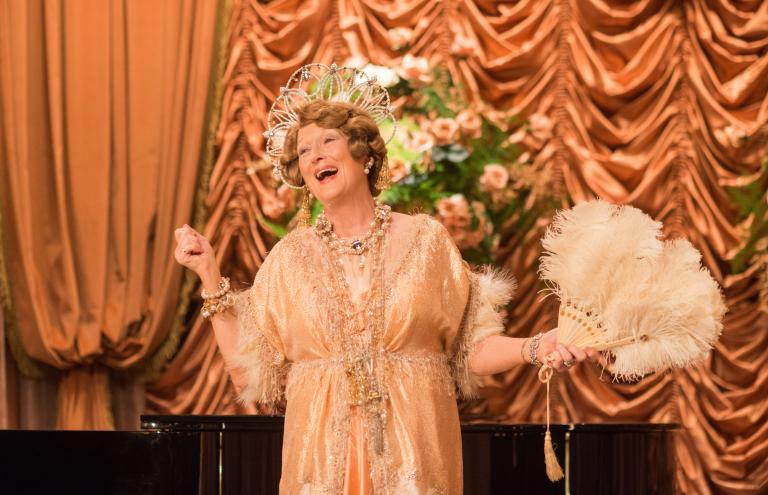 FLORENCE FOSTER JENKINS is in theaters August 12 and is rated PG-13. 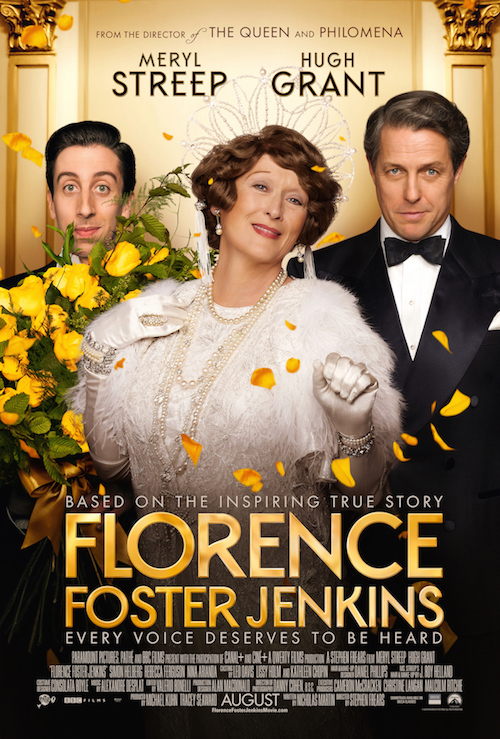 Not many people know the story of Florence Foster Jenkins. Upon googling her I discovered that she was an American socialite, but apparently that was just one small part of a much bigger story. In theaters now, is Florence’s entire story starring Academy award-winning actress Meryl Streep playing Florence,  a larger than life personality that helped music thrive in New York City while she lived.

“If you talk to most music students or drama students they know about her.” Meryl Streep shared about the real life Florence. Despite an obvious difference in talent, the iconic actress revealed that she did relate to her character’s experience. As a young actor in New York, there was that dread of the paper and the critics which Florence evaded for a time out of the same fear that Streep felt when she started out. “I remember the feeling of being in a play in New York and you’d just get this terrible feeling, terrible anixeity. You’d go buy the papers. It was so terribly old school.” Through that connection she was able to tap into Florence’s relatablity.

“I think the script is really masterful in the way it walks that line,” she said of Florence’s devotion to music which made her really sympathetic. In the real life, with her inheritance that allowed her to fund the arts to her heart’s content, she endeared herself to the great musicians of her time in order to entertain them with performances of her own.

Performances that her friends were too kind to tell her that they were awful lest they hurt her feelings or their budgets. In the film Hugh Grant plays her doting husband St. Clair Bayfield who goes out of the way to hold up Florence’s pure happy world, in which she believes she’s every bit as talented and passionate for music as her contemporaries. He said of Meryl’s role, “The character in our film, there’ certainly egotism there and the love of the limelight but it’s significantly offset by the passion for what she does. Her passion for music is always endearing and makes her sympathetic. Their relationship was very unorthodox; completely outside the norms especially for 1944, but it worked. There’s a line in the film where I say to McMoon, ‘Ours is a happy world,’ and I always thought that was the center of the film.” 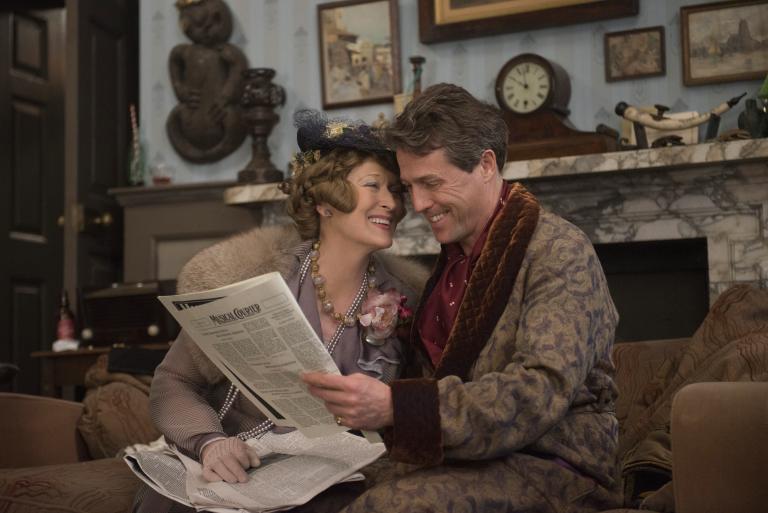 Bayfield comedically funnels her money into keeping her guests happy, and to surround her with those who will always see her most authentic adoration and devotion to music despite her inability to actually sing. “They were together for 35 years. I’m sure there was a huge element of self-interest when this penniless actor is scooped up by a millionairess and given a postion and lovely suits. There was self interest in her part to have an aristocratic Englishman at her side. They loved the limelight. They were a glamorous couple.” said Grant on the complexity of Bayfield’s relationship to Florence. “They were together so long,” he affirmed, “They were passionately fond of each other. They would have protected each other to the end of the world.”

Early on in the film, you get introduced to an innocent young man auditioning to be her accompanying pianist, Cosme McMoon (Simon Helberg), who is immediately enchanted by her kindness and dedication to the arts before hearing her sing. “He was fresh off the boat and wandered into his dream job, and it wasn’t until he came back and she opened her mouth.” Helberg described how he thought McMoon’s reacted to Florence. “She was sort of like him in her innocence and her head in the clouds.”

Through him you come to realize that no one wants to break Florence’s heart by discouraging her to perfom. “There’s something very naive and open about him. He’s a very simple, genuine guy that has no sense of cynicism or judgement.” The film celebrates the intense friendship and care that both Bayfield and McMoon had for Florence.

Helberg  described how easy it was to play that for Meryl Streep. He felt like any actor would getting the opportunity to costar with her,  “Sometimes I did get lost just having a front row seat the greatest actor there is. It was a lesson in how to bring yourself to the thing that you love. She’s very welcoming and open and is only interested in telling the story in the best way it could be told.”

“It could have really gone wrong.” Streep elborated on how she viewed Florence in her interpretation. “It could have bent to ridicule her. It would have been easy enough to go in that direction. And she is ridiculous on so many levels.”

To Streep, playing Florence as less tragic and more just jovial was rooted in seeing how a woman of that time was able to live, “It was a time when women, especially women of means,  to have a career wasn’t thought to be done. These women would make their way in society by joining clubs. She was a member of 60 clubs in New York City and that’s how they made their way. Good deeds. She inherited the money from her father and she just handed it out. She really did underwrite Carnegie Hall, and Toscanini did come begging all the time and she gave it away.”

Florence in many ways represents the audience that wishes they could be up on the stage doing the arts. Streep summed it up in her experience of people who like Florence ceaselessly keep it going, “I know people like this. Who are great patrons of the arts who are secretly like ‘I would love to be up there.'”

And so they in a way that no other group has, dedicate their recreational deeds on investing in something that is ultimately humanity’s greatest gift to one another. The importance of that isn’t lost on Streep who took that into her portrayal of Florence,  “It’s the love of the thing.” she emphasized, “I found her touching and silly but we’re redeemed by who we love and how we love. That’s the main thing. It’s not how good she sang.” 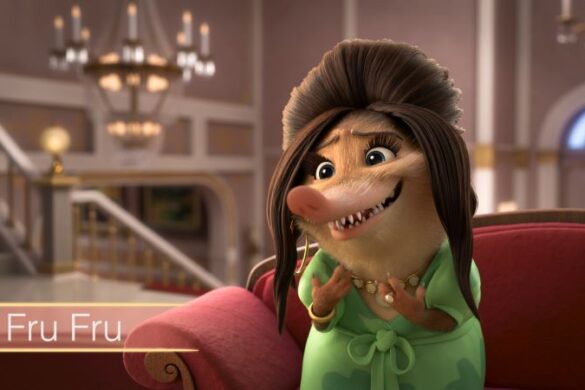