Top Posts
LUCK Has Plenty of Heart and Likable Characters
Jenny Slate Talks “Marcel The Shell With Shoes...
TRON Night On The Grid Panel At The...
Bullet Train: No Holds Bar Funny Action-Filled Bloodbath
Go on a “Journey Into Storytelling” at The...
Home entertainment Guillermo Del Toro’s Pinocchio Is A Whimsy Dark Tale
entertainmentNewUncategorized

Most of us know “Pinocchio” from the classic Disney animated tale that followed a wooden puppet who dreamt of becoming a real boy. But as they prepare for their reimagining in the vein of a live-action adaptation, Guillermo Del Toro has his own take on the tale but with a slightly dark twist. And now, Netflix has released the first trailer for “Pinocchio.” 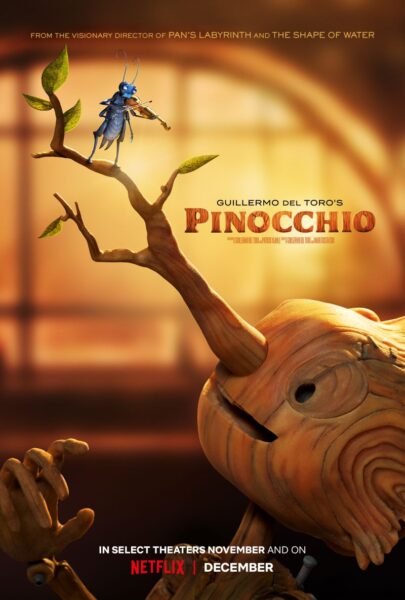 Del Toro’s “Pinocchio” has been under development for a few years now after suffering multiple production delays and a few setbacks, not to mention a pandemic. But now, the director is moving away from bringing monsters with humanity to life on the big screen and stepping into the world of animation. Specifically, stop-motion animation. And the result is something that looks spectacular.

The film is filled with Del Toro’s sensibilities, from the character and set designs to the dark twists on a childhood classic story. In fact, the story of Pinocchio is perfect for his sense of story, considering it centers on creatures that humans do not understand.

“For my many wanderings on this earth, I had so much to say about imperfect fathers and imperfect sons, and about loss and about love,” Jimmy says in the opening of the trailer. “I learned that there are old spirits who rarely involve themselves in the human world. But on occasion, they do.”

Seeing Pinocchio’s origins and knowing now that the puppet was whittled from a tree that stood in front of the grave of Geppetto’s son is tragic. But in a twist of fate, Geppetto’s will brings the puppet to life. Not only that, but the same tree was once the home of Jimmy Cricket, who will act as Pinocchio’s conscience, or at least a guide to the story.

The trailer doesn’t shy away from the fact that this Pinocchio may be a story that you are familiar with and maybe even heard of before, but you haven’t. Because this is a story of “love that will give you life.”

Academy Award®-winning filmmaker Guillermo del Toro reinvents Carlo Collodi’s classic tale of the wooden marionette who is magically brought to life in order to mend the heart of a grieving woodcarver named Geppetto. This whimsical, stop-motion film directed by Guillermo del Toro and Mark Gustafson follows the mischievous and disobedient adventures of Pinocchio in his pursuit of a place in the world.