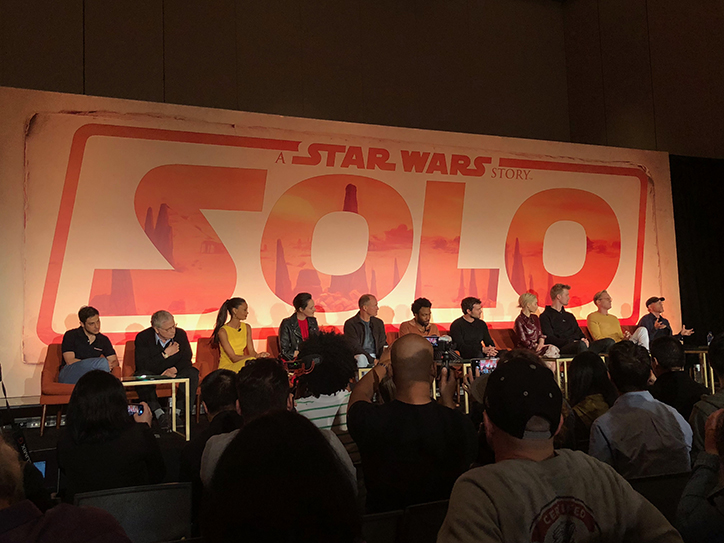 The cast, writers and director of Solo – A Star Wars Story, sat down with us on an overcast Saturday to talk about roles they were destined to play, funny moments on set, taking on these classic characters and trying not to screw up the Star Wars franchise. 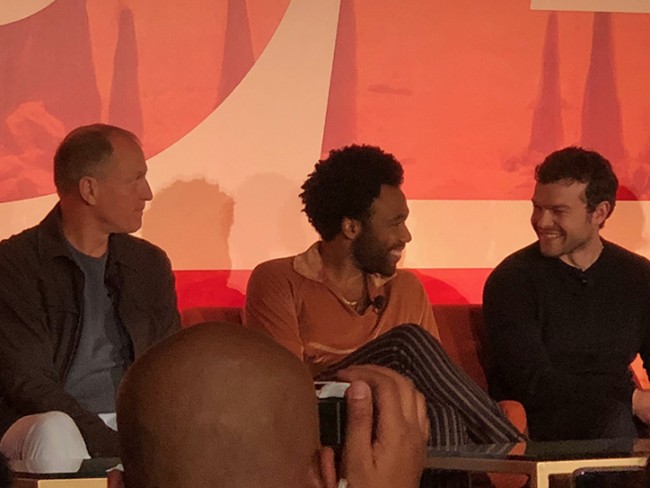 Here are 10 highlights from the conference.

Alden Ehrenreich on taking on the character of a young Han Solo.
He had the role for quite some time and tried to take in as much as possible very early on. Watched the original movies, and how Harrison Ford played him and how Han Solo is operating in the world. But once filming began, all that was put aside and Alden played the character where he was in the moment of the story.

Lando Calrissian was a role Donald Glover was destined to play since he was a seven-year old boy.
When he was a child, Donald had a Darth Vader figure that had a lightsaber, which he loved. But he bit off the lightsaber and gave it to his Lando figure. His mother thought he would choke on the lightsaber and never let him have it anymore. Many years later, when he heard that they were making the new Star Wars movies, he told his agent that if Lando is in any of these new movies he has to play that character. Also, Donald’s father was a huge Lando fan too.

Woody Harrelson on playing Tobias Beckett.
Tobais was a really easy character for him to play because he is a thief and scoundrel, but very well-written. He is a gunslinger that abides by a code, but won’t tell you what that code is. 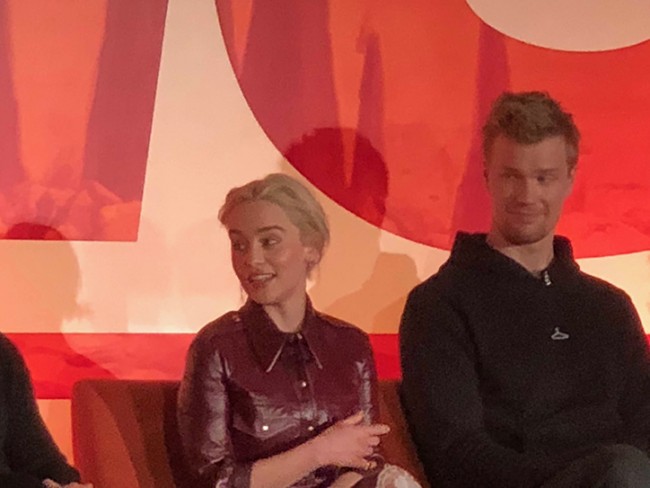 Emilia Clarke and the mysterious Qi’ra.
She is a bit of a mysterious character that is a bit difficult for Emilia to talk about since there is some secrecy behind her character. Qi’ra has a history with Han Solo and a bit of darkness in her mysterious past. 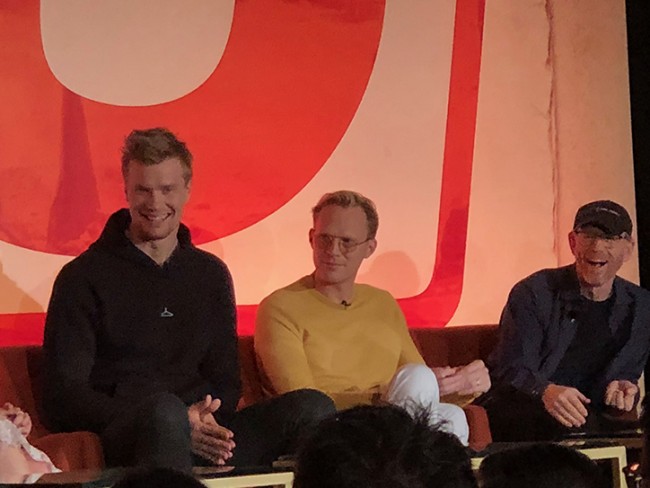 Ron Howard on coming in to direct a Star Wars movie.
He came into this a bit late since there were creative differences with the original directors. At this point of his life and directing career, he liked experimenting and taking chances. Ron also wanted to have the creative experience about jumping into a Star Wars movie. Once it was announced that he would come in as the new director of Solo, he told himself “Don’t f*** this up.”

Paul Bettany loved being Dryden Vos but blew his first take with a cuddle.
After coming off of Avengers where he played the superhero, Vision who is the total opposite of Dryden Vos, who is deliciously bad. Paul was really fine with it. No guilt and super happy to be playing someone so evil. On one of his first takes he blew it. In a scene where he is meeting everyone, he was supposed to shake hands with Chewbacca. Instead he started to shake his hand and then went in for a cuddle.

Chewbacca was a life changing role for Joonas Suotamo.
This was a life-changer of a role for Joonas, since he was borderline jobless when he received the role of Chewbacca. Peter Mayhew, the original actor who played Chewbacca, gave his blessing and even gave him some assistance in taking on the legendary character. 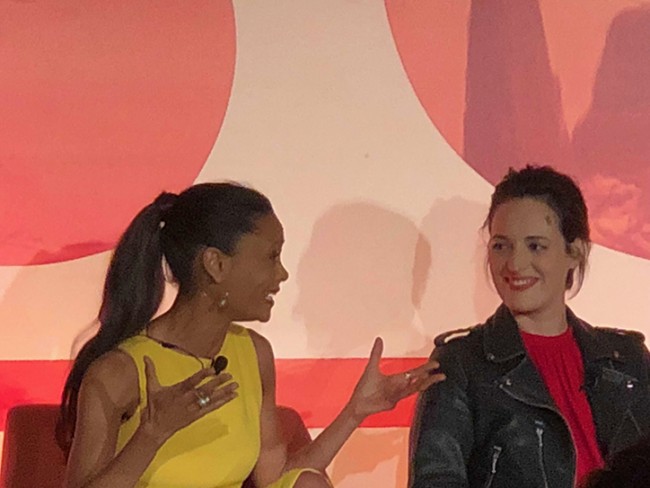 Phoebe Waller-Bridge on bringing L3-37 to life and giving her attitude.
The droid character of L3 is an inspiration to Phoebe Waller-Bridge. She loves that the character is nothing like any other droid that we have seen in the Star Wars universe. A self-made droid that created herself from the parts of other droids, but also she is stronger, unique and more independent than originally was created. Revolutionary, uncensored and funny.

Thandie Newton on filming the battle scenes as Val.
She loved the character of Val. Filming some of the battle sequences were extreme. The battle scenarios were almost real with explosions going off, debris and mud getting into places you didn’t even know you had. The camaraderie and humor between the cast was great. 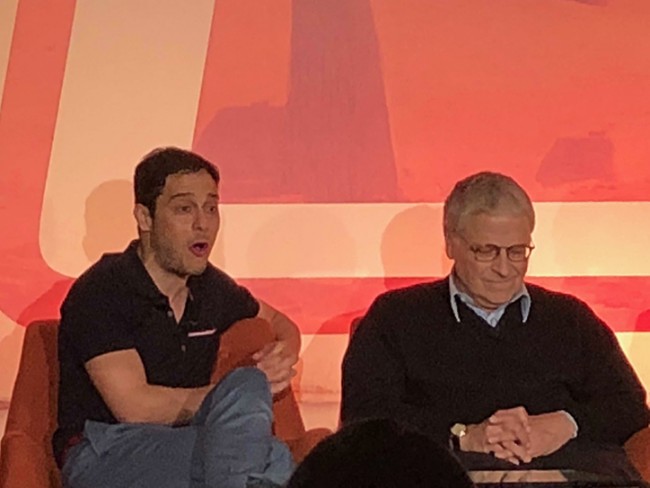 Lawrence and Jonathan Kasdan on writing Solo.
Han Solo was a character that Jonathan had been attracted to ever since he first saw Han in the cantina. His story was one they have been wanting to tell for a long time. Their approach in writing the movie was like a crime/western genre movie.

A few other sound bites from the Q&A:
• The late Warwick Davis and his daughter were on set as the droids in some of the droid fights.
• Some extra fabric that was left over from Lando’s fur cape was made into a pillow for Donald Glover.
• Joonas had to attend Chewie Boot Camp to learn to speak like a Wookie and tickets were sold out, but was able to squeeze in.
• Ron Howard brought in his brother, Clint Howard, when he needed someone for L3 to be pissed off at.
• Harrison Ford surprised Alden at an interview earlier that day.

Solo – A Star Wars Story is in theaters, Friday, May 25th.