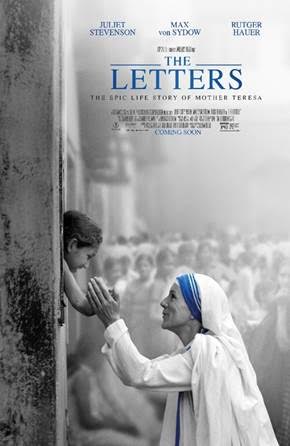 The Letters: The Epic Life Story of Mother Teresa

Even before I became a Jr. High Religion teacher, my current profession, I always had a fascination with and a love for Mother Teresa.  I remember sitting in my dorm room just a couple of days into my Sophomore year when I heard the news that she had passed away.  I recall feeling a profound sense of loss, by which I was surprised. Even then I’d say my faith life was still evolving, but I had a keen sense that Mother Teresa really meant something to the world—religious and secular alike—and that her death would leave a void felt by many. Nowadays, as a mother and teacher, I often think of her and her words, “Do small things with great love.” Oftentimes there’s nothing heroic I can do in a day-to-day sense, but this thought of Mother Teresa’s helps me to remember that even the everyday tasks contain the opportunity for great outcomes.

But I digress. I was so excited to have the opportunity to review the new movie The Letters, a dramatic and powerful film showing Mother Teresa’s life through the context of letters that she wrote to a dear priest friend of hers. The cast includes Max Von Sydow as the priest, and I found Juliet Stevenson to be remarkable as Mother Teresa.  It can’t be easy to portray a Nobel Peace Prize winning world hero of social justice, yet I found that Stevenson had just the right mix of humility, sternness, kindness, and perseverance in her character to play the part. The film is rated PG and was written and directed by William Riead for CinemaWest Entertainment.

The movie begins with Mother Teresa teaching in a convent school, but the viewer senses some inner unrest in her as she views the poor from her windows.  In one scene, she goes out into the street to bring some food to some people outside, but is shooed back inside out of fear for her safety. Mother Teresa truly feels she is being called to be of service to the poorest of the poor in the Calcutta region of India, and her persistence pays off when she is granted the ability to do so.  She isn’t widely accepted at first, only winning over some of the Hindu people when she truly ministers to their needs, including delivering a breached baby. Over the years, we see her as a woman deeply devoted to prayer, and providing more than just food to the poor. She also teaches the children to read and write, bathes them, and establishes a care center so that those dying in the streets can have some dignity in their final hours. Mother Teresa truly embodied the Church’s belief that all people are created in God’s image and thus contain a deep level of human dignity, and she treated them as such. 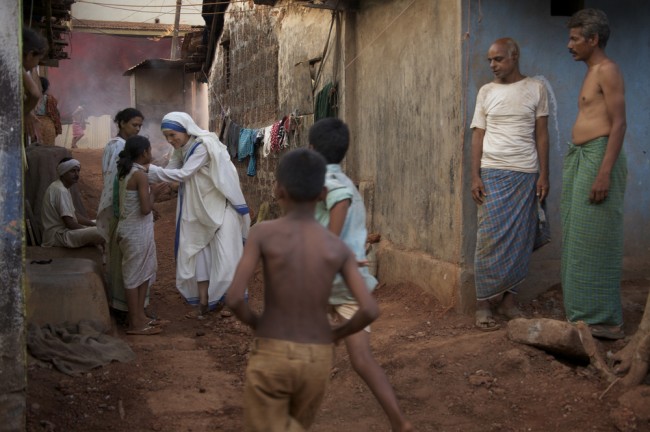 As the movie comes to an end, we see the ever-humble Mother Teresa using her being awarded the Nobel Peace Prize as a time to advocate and draw attention to the needs of the poor. Through the letters to her friend, we see that she was someone who was plagued by a deep sadness, and one can only guess that is because she could not help every single person who needed it. However, despite that helplessness she herself once felt, Mother Teresa’s Sisters of Charity still continue on with her work today, and there are over 4,000 Missionaries of Charity in hundreds of countries worldwide.

The Letters is a fantastic and inspirational movie, and I myself was inspired anew by Mother Teresa’s life and convictions.  What a different place the world would be if we all did small things with great love, just as Mother Teresa encouraged.  Even if we started with just a smile, Mother Teresa once said, “Every time you smile at someone, it is an action of love, a gift to that person, a beautiful thing.” I think that is a small gift that each one of us could afford to give.

The Letters is in THEATERS NATIONWIDE DECEMBER 4th, 2015 and is rated PG.

About the author: Jess is a mom of three girls  from Northern MA.  She has been married to her husband Tim for 14 years and works as a teacher and part time at her church.  Between running from preschool to elementary school pick up, dance classes, gymnastics and various volunteer work, Jess enjoys reading, spending time with friends, having dance parties with her girls, amateur photography and the occasional margarita.

* We screened this film for editorial purposes. Jessica’s opinion is her own.