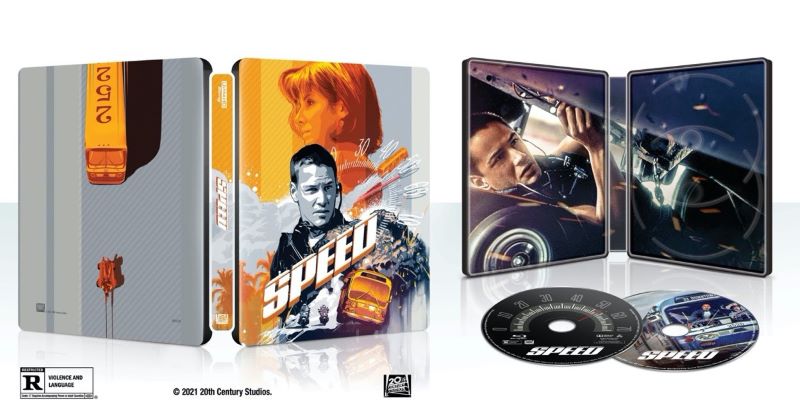 There are good action films. Then there are great ones. Jan de Bont’s “Speed,” starring Keanu Reeves, Sandra Bullock, and the late Dennis Hopper, is the latter. The action-thriller, released back in 1994, was a taut popcorn flick full of energy and terrific performances from its cast and set the standard for what action films should be. Considered to be one of the best, “Speed” went on to be a worldwide hit grossing $350.4 million on a $30 million budget. So, it stands to reason that its home entertainment release mirrors its standing.

In the film, a mad bomber arms a bus full of civilians with an explosive that will detonate if it goes underneath 55 MPH.

“Speed’s” premise may sound simple on paper, but its execution is anything but simple because the film goes all-in on the action and does not hold anything back. Graham Yost’s script makes full use of that simplicity by putting the bus in all sorts of crazy situations. The exhilaration of watching the bus make all sorts of crazy hairpin turns, jumping wide gaps, and surviving all kinds of collisions, not to mention driving on a flat tire, really turns up the action.

Though “Speed” approaches its 30th anniversary, there is a lot about it that holds up surprisingly well. Much of that has to do with the film’s outstanding casting and the chemistry between its lead trio. Bullock’s Annie enthusiastic attitude provides lightheartedness and levity during some tense situations, while Reeve’s Jack has a hotheaded attitude that is perfect for the action thriller. Put together, and it makes for a terrific film. And Dennis Hopper gives a colorful performance as the mad bomber Howard, who is a perfect foil for Jack, and fits nicely for the “Speed’s” cat-and-mouse chase.

Shot on traditional 35mm film, “Speed’s” color textures is another thing that holds up well. One could argue that the 4K digital upgrade is an improvement as the finer details from skin tones, fabrics, surfaces, and other aesthetics are visually enhanced.

“Speed” also comes with a 5.1 Dolby Digital audio track, creating a more effective sound experience when watching the film. And it gets even better with Mark Mancina’s intense score.

While “Speed” excels in its audio and visual upgrades, the bonus features are somewhat lacking. As it only comes with the traditional audio commentary and general behind-the-scenes EPK material. Although, the commentary has Yost and Gordon giving a nice look back at the film, including some of the casting choices and shot selections that went into the film.

“Inside ‘Speed’” is the one feature that you want to look out for if you are interested in the logistics and production of the film shot in the 90s. As such, you will get to see the on-location shooting, visual effects, and stunt work. And, it was a lot. It is incredible to see how much was accomplished using practical effects, which is impressive considering how some filmmakers rely heavily on technology.

Here’ are a list of the bonus features that are available on the 4K version:

Speed‘s Ultra HD Digital release has the following special features on it:

If anything, “Speed” holds up really well, and is still considered to be one of the best action films to date. It may be lacking in a few areas, but for the most part, the action thriller is a fine upgrade and even better addition to your home entertainment collection.

“Speed” is available on store shelves and digital now.