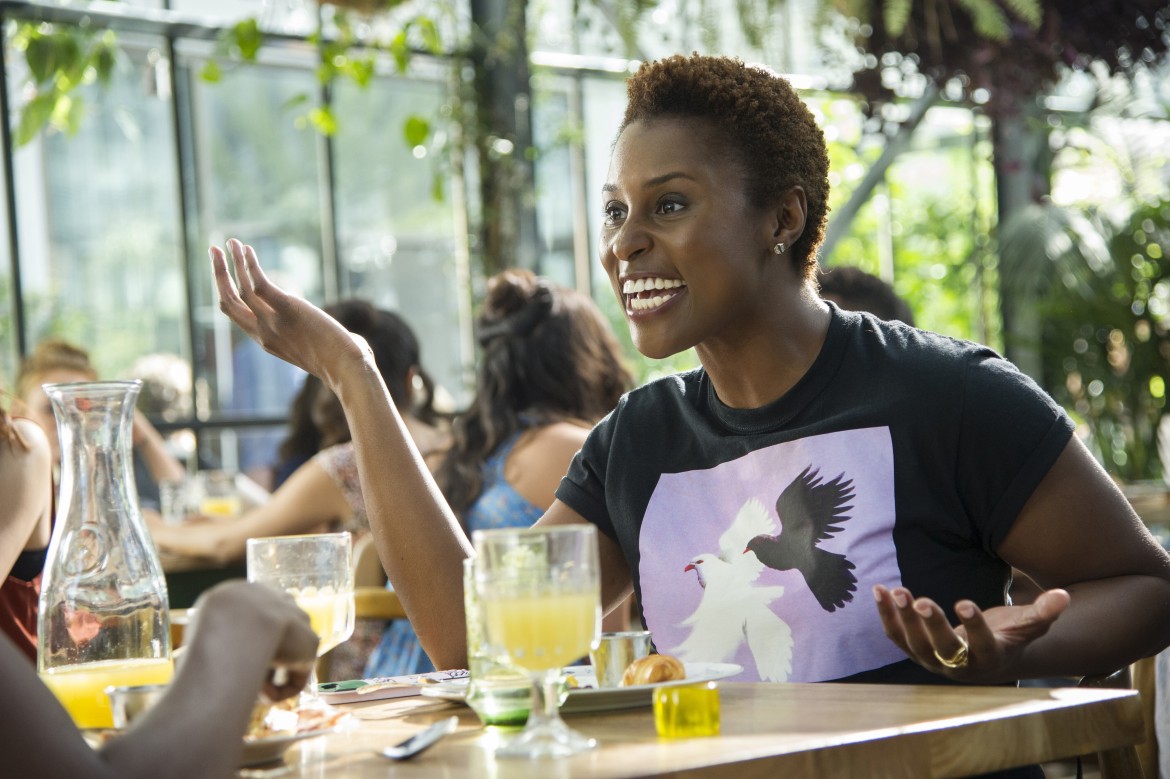 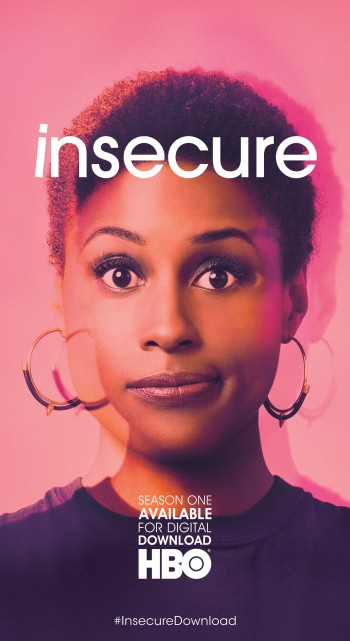 Let’s face it. Everyone copes with levels of insecurity. Some navigate through moments of low self-esteem by wearing emotions on their sleeves for the world to view. Others are introverts like the character Issa in HBO’s smash comedy series, Insecure. Although successful, college-educated professionals, Issa (portrayed by Issa Rae) and her bestie Molly (Yvonne Orji) are African-Americans sharing a series of relatable misadventures. As a quirky, on-screen educator, Issa searches to discover her true purpose in life, while stumbling through awkward real-life situations. From being taunted by her students to coping with infidelity issues, Issa faces everyday challenges silently – like most introverts. However, Issa releases pent-up frustrations via hilarious voiceovers and outrageous dream sequences – often revealing emotions most people share a commonality. In celebration of the digital download release of Insecure: Season 1, we had an opportunity to catch up with the Golden Globes nominee and explore her successful journey.

An intimate meet-and-greet with Issa Rae was held at the Den on Sunset, where Insecure-themed cocktails were served. One of Issa’s popular mantras, “Bish, Please!,” was transformed into a tasty libation, featuring a “Boozy Sonic Limeade” with Raspberry Vodka, seltzer, cherry and simple syrup, fresh lemon and lime juice – topped with Luxardo cherries. For those looking to get lit, Boozy AF was the “go-to” cocktail made of Tequila, house-made grapefruit simple syrup, refreshing Izze Grapefruit soda – topped with fresh grapefruit wedge garnish. Many enjoyed a “stiff” Insecuri-Tea, which featured Bourbon and Sweet Tea vodka – topped with OJ and orange peel zest for good measure! Yes, it was plenty of drinks, laughs and good conversation. 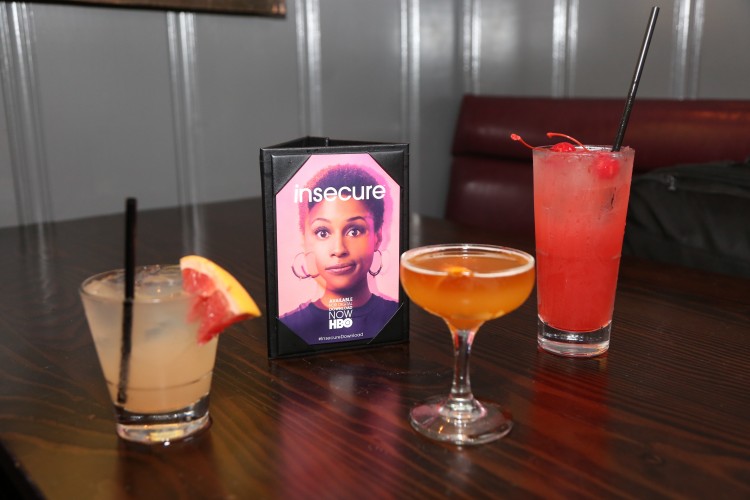 For Issa, bringing Insecure to HBO was a no-brainer and the next logical step following her hugely-popular web series on YouTube, The Misadventures of Awkward Black Girl (2011-2013). The cable network offered Issa complete creative control. “They were like, ‘We trust you!’ And, they focused mainly on the storytelling, and the elements: what might not ring true tonally, in terms of the tone that we say,” Issa explains. Having creative control allowed Issa the freedom to launch the second phase of her web series. Issa’s comedic approach in The Misadventures of Awkward Black Girl defied the stereotypical “strong, angry” African-American woman, by showing a nerdy, vulnerable, and eccentric side. Such raw humor touched the pulse of America, crossing culture, class and age. Oftentimes, I felt as if I was looking in the mirror, watching J cope with unpredictable challenges at work and home. An introvert fearful of outward expression, J’s pent-up frustrations erupted in a comedic series of hilarious voiceovers and outlandish dream sequences.

Created, written, produced and starring Issa Rae, HBO’s Insecure is a continuation of the Awkward Black Girl misadventures. “The show is about a journey to grow and conquer your insecurities,” says Issa. “And, I feel like I’m further along on that journey than the character is currently. But, it’s a journey nonetheless,” the star and producer says. It’s easy to become emotionally invested in Insecure’s main characters. I and countless fans sympathize with Molly (Yvonne Orji), Issa’s BFF and successful corporate attorney struggling to repair her love life. Issa says some consider Molly the “stereotypical” black woman on a mission to find love within her pay grade. However, I wholeheartedly agree with Issa’s thoughts concerning Molly. “She’s a working millennial black woman, who’s trying to find a partner. And, that is very commonplace among women: especially among black women,” Issa explains. “It’s a real struggle, and I think we just want to make her layered. You’ll see as she continues through her own personal journey. Her insecurities are very clear, and it’s just about figuring out where they come from, and kind of building more of her background.” 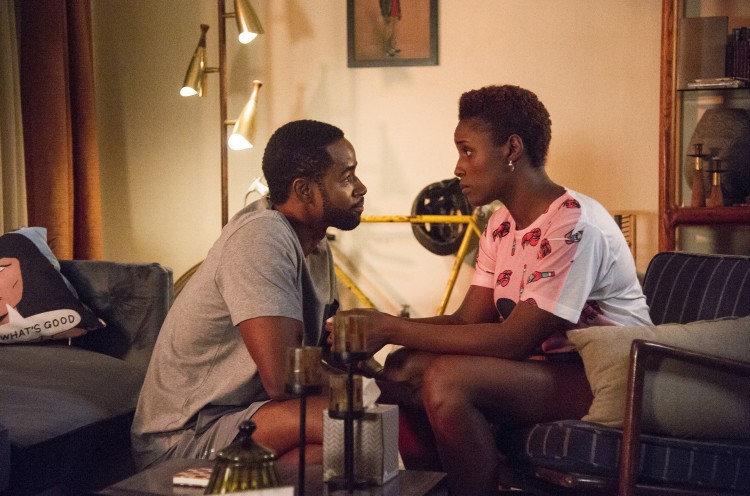 Time and again, through the eyes of Issa’s long-time love, Lawrence (Jay Ellis), I witnessed male members of my family’s unemployment crisis. Though college-educated, good-hearted and articulate, obtaining an amenable job remained a distant dream. For Issa, creating this storyline was pivotal. “I have a lot of male friends who are super-qualified, but just aren’t able to get hired right now,” says the Stanford alumni. “I didn’t expect so many black guys to relate to show, and didn’t even think to relate to the fact that so many men are in Lawrence’s shoes. And, I think that’s why they took to him so hard or so much in the run of the season,” Issa explains.

Issa also makes it a point to create a positive portrayal of Inglewood, Calif., by filming in and around the South Los Angeles area, which is now on an economic upswing. “We’re trained to believe this is the extreme ‘hood and this is the violent area,” says Issa. “But, I was like, ‘No.’ A lot of types of people live there: different types of black people live there from working class to affluent black people, and Latino people. It’s just a melting pot of cultures. There’s more to it than what the media in the past has portrayed,” says the award-winning writer/producer.

With Insecure and The Misadventures of Awkward Black Girl exhibiting elements of previous award-winning black shows, I asked Issa about her inspiration for creating her programs and favorite TV shows. She cites the ‘90s as a great era for black TV shows. “I watched Moesha, The Fresh Prince of Bel Aire, New York Undercover, Girlfriends, Martin, Living Single, and also TGIF and SNICK because I was a young girl,” says the actress. She’s also confident in the change of tides Hollywood has taken toward people of color. “First of all, it was inevitable and it feels like so necessary. People are demanding alternative stories at this point,” the writer explains. “It feels refreshing! Whereas before I was a little bit hesitant and skeptical like, ‘Is this going to be a trend?’ But, you’re really seeing a shift happening. And, I think in this political climate now: people are especially more than ever are demanding those new voices.”

Make no mistake, Issa is being heard loud-and-clear. With just one season under her belt, critics are anticipating Insecure’s future seasons. To match this raw and outlandish dramatic comedy, Issa collaborated with Prentice Penny, Melina Matsoukas, and Solange to produce Music From the HBO Original Series: Insecure, which is now available on RCA Records in partnership with HBO Global Licensing. To listen, visit www.insecuremusic.com. This soundtrack is hot with releases from indie and established artists including; Gourdan Banks (“Keep You In Mind”), D’Angelo And The Vanguard (“Sugah Daddy”), GoldLink (“Palm Trees”), Kari Faux feat. Leikeli 47 (“Top Down”) and Thundercat (“Heartbreaks + Setbacks”). As an HBO adult comedy, I highly recommend this show for mature audiences, ages 18 and older due to language, content, dialogue and sexual situations.