Walt Disney Animation Studio films are always full of entertaining stories with themes that will surely resonate with its audience. But none of that would be possible without its characters and environments. And it doesn’t get any more entertaining than Ralph Breaks The Internet, the animated sequel to Wreck-It Ralph.

In the film, Ralph and Vanellope go on an epic journey from their tiny gaming homes at Mr. Litwak’s Arcade to the Internet in search of a rare replacement part for Vanellope’s Sugar Rush game. But the Internet is not quite what they expected it to be, and soon they find themselves deep in the Internet rabbit hole.

But how does one make the Internet tangible? And how do you populate that world? Well, ThatsItLA was invited to tag along with their fellow journalists to get that answered. We already spoke to the writers and directors of the film, but now we talk to the animators who talk about overcoming some of those challenges.

With creating the world of the internet, Matthias Lechner, the film’s art director, and environments says it was interesting to see the physical side of the Internet through their research at One Wilshire in Los Angeles, CA. The building is one of the largest Internet telecommunication centers in the world. So it was important to get something that would resemble that in an animated form.

When creating the Internet, they wanted to have it feel like a huge endless metropolis city with each building representing a website. But when you go in when you go in the physical space is not the same because it’s abstract like the arcade games in Wreck-It Ralph.

The idea was that the internet is continually being built on top of each other. So some of the more outdated websites like Netscape, AskJeeves, Myspace, and Napster would be on the lower levels of the Internet, while newer and more popular websites and apps, like Facebook, Twitter, Google, and Amazon are now buildings that populate the surface levels of the Internet. 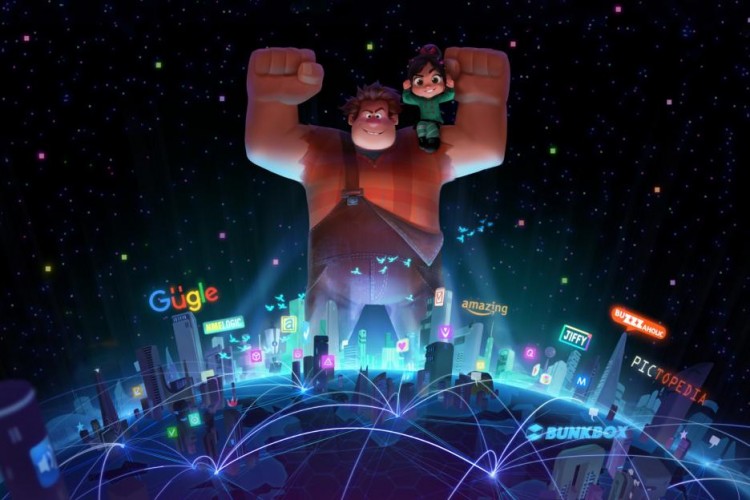 While each building is a website, when you go in the physical space is not the same because it’s abstract like the arcade games in Wreck-It Ralph.  And each site will have something associated with its purpose. Twitter will be a tree with a bunch of bluebirds “tweeting;” Amazon will be a large stack of cardboard boxes; YouTube will be a giant TV screen; Facebook is just a giant book with an F on it; and so on and so forth.

But treating the internet like a fictitious metropolis without anyone to populate it would be nothing more than a ghost town in a machine. So the team had to figure out how Internet users and algorithms and data would interact with each other.

Crowds Supervisor Moe El-Ali would then took these characters and separate them into two groups. Net Users will be the people who are using the Internet.  They basically look like a human if they had a rounded square app for a head. And just like us, they can be customized to look however they want. So you may see a Net User cosplaying as their favorite Marvel superhero.

The Netizens are the people who can move around freely and help the Net Users with what they need whether it’s searching for a keyword or making a purchase. Once they figured out what it meant to populate it, they saw that the number of characters it would take would be around 150,000.

To put that into context, Bolt, in its entirety, has 57 characters. Wreck-It Ralph would increase because the film took place in multiple worlds, the human world and the inside the arcade games themselves. So it went from 57 to 223 characters along with 421 variants. Variants are when an animator takes a character and gives it different items of clothing, faces, and hairstyles. It is something that helps flesh out some of these worlds you see in a Disney film. Take for instance Zootopia where animators gave Judy Hopps’ siblings all sorts of different items of clothing. That is a variant.

So with Ralph Breaks The Internet, they took the same 222 characters and put it into the film. Can you guess the one character that didn’t make it into the sequel? But with any sequel, you need to have new characters, and they’ve added 212 new characters, for a total of 434 characters in one film. Additionally, they’ve put in 6752 variants. So you can expect to see a very diverse population of net users and netizens.

And when you add small gestures and movements like blinks and head turns, it gives the world more life. Additionally, animators are watching these gestures and emotions carefully whenever the talent is recording. The actor’s personality can also be very inspiring for the character design.

But just because there are advancements that help overcome some challenges they had previously doesn’t mean that there won’t be other new challenges. In this film, Knowsmore (voiced by Alan Tudyk) went through a variety of design changes.  There was one time where he looked like an owl. But the team settled on retro 60s design because they wanted to keep that flat and stylized look.

The Net Users and Ralph and Vanellope will travel with the help of self-driving cars, which will form around them and send them to the website destination. The speed limit is in Megabytes per second, while the traffic signals are represented by the close (red), minimize (yellow), and maximize (green) buttons on a computer window.

Other new characters include Yasss (voiced by Taraji P. Henson) and Shank (Gal Gadot). Yasss is an algorithm fashionista who runs the trend-based website BuzzzTube.  And just like changing trends, Yasss’ clothes, hairstyles, and looks will constantly be changing. Dave Komorowski (head of characters and technical animation) says they modeled Yasss after Cruella De Vill, another Disney fashion conscious character. But instead of a coat of fur, Yasss’ coat will be made out of fiber optics.

Ralph and Vanellope will also see some changes to their characters. Advances in lighting, look, simulation techniques and a brand new renderer allow them to overcome some of the challenges they came across in Wreck-It Ralph. For instance, they can now bend Ralph’s knee.  Vanellope’s hair is in a much tighter groom as opposed to the first film where it was a fake ponytail attached to a real groom.

While more than 150 unique master sets, that are unique environments to some of these characters, were created, Lechner says he and his team found an opportunity to poke fun at Disney with Oh My Disney, which happens to be a real website that is a combination of Buzzfeed quizzes and everything you love about Disney.

And just before the entrance of Oh My Disney, which looks like a combination of both Disneyland and a San Diego Comic-Con booth, are motels, which net users can visit if they need a rest and netizens work at.

“For the inspiration for the Disney princess dressing room scene we actually went to the Dream Suite at Disneyland, which is a hidden place where if you are a contest winner you can sleep over inside the park with Mickey,” Lechner said.

He added that each cubby will have something that is unique and represents the princesses’ personality. For instance, Snow White will have a magic mirror, Rapunzel will have a painting of a mural, and Ariel will have thingamabobs.

Technical supervisor Ernie Petti says there will be plenty of props and Easter eggs to look at, and they are not just from the Wreck-It Ralph but from other films like Big Hero 6, Zootopia, and even Bolt. He adds that getting the model and prop may be easy, but making the textures fit into the world may be more difficult because these props don’t age well.

All of these new elements and textures push the boundaries of animation. And we will get to see how far these animators have come with Ralph Breaks The Internet, which opens in theaters on November 21, 2018.