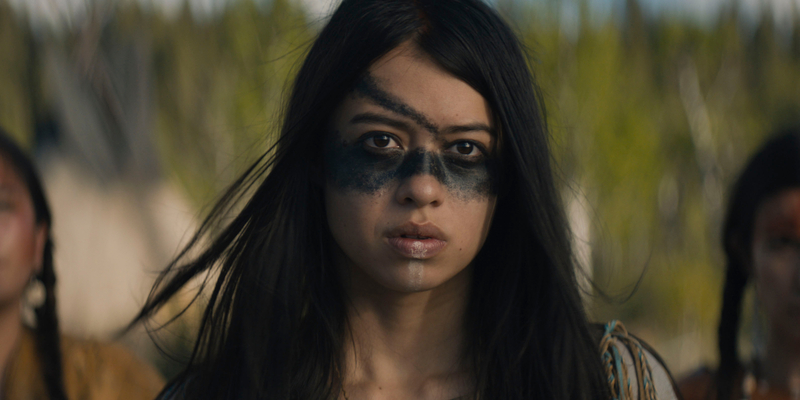 Dan Trachtenberg’s Prey takes a different approach to the humankind versus extraterrestrial trophy-seeking alien hunters dynamic we’ve seen in the “Predator” film franchise. Set 300 years ago, the film follows a promising warrior named Naru (Amber Midthunder) who finds herself hunting one of the most terrifying creatures she has ever seen, the Yautja, aka the Predator.

ThatsItLA joined their fellow journalists at the “Prey” virtual press conference to talk to Midthunder, along with Dakota Beavers, who plays her brother Taabe, director Dan Trachtenberg and producer Jhane Meyers. All reminisced about the making of the film, elaborated on how it breaks the language barriers, and shared their thoughts on working with furry four-legged co-star.

Though it is titled “Prey,” the film is still a “Predator.” According to Trachtenberg, the title change came from the idea that “Prey” has the exact same double meaning as “Predator.” “The title can function just like Predator. And while it’s still being its own title, so that this movie could feel like its own movie, which has sort of always been the drive for me in thinking about remakes or adaptations or sequels or like really hoping that you can make a movie that is a great movie on its own,” he said. And then when you include the I-P and all the links of a franchise, it just makes it even better that it’s not solely reliant on being that I-P to be a good movie.”

Trachtenberg’s approach would give the “Predator” franchise a hard reset. But it would be a while before he could start filming, considering that Disney was in the process of acquiring 20th Century Fox. “I started developing this maybe a year after 10 Cloverfield Lane came out. And then, the Fox-Disney merger happened. And all of those things really delayed this from getting going. But the main inspiration behind it was a confluence of a couple of things,” Trachtenberg said. “One was really wanting to make a movie that was primarily action-driven, mainly told visually, but not wanting to that just be fun, just be a good time, to wanna inject that with heart and emotion.”

During the virtual press conference, the director spoke about the film’s genesis and how it all stemmed from hearing his friends talk about the first “Predator,” which he was not allowed to watch at the time because he was too young to watch R-rated movies. “They described the entire movie to me on the trip to the karate tournament. And the one thing they said that stuck with me was a fight on a bridge over a waterfall between Billy, the Native-American tracker, and the Predator.”

Eventually, Trachtenberg saw the movie but was disappointed that the scene described by his friends was never in the film. “I’d always wanted to see that and really thinking about, ‘oh, we’ve seen a lot of movies that are focused on Arnold Schwarzenegger and that kind of hero,’” he said. “What if we focused a movie on a different kind of character? So all of that sort of swirled and came together into the genesis of this movie.”

So Trachtenberg envisioned “Prey” as an underdog story with an action movie focused on characters that generally are not the heroes of the movie they’re in. But he also pulled from a few other films that would later serve as the inspiration. “It came from the things I spoke about earlier, in wanting to make this an emotionally engaging action movie, inspired by movies like ‘Gravity,’ ‘1917,’ and ‘Revenant,’ of course, like real survival tales,” he said. “And always loving the idea of doing period sci-fi, always seeking that out. And I also think, you know, I was also thinking about making a Western with no cowboys in it. That’s a separate idea.”

But Trachtenberg wanted to have a film that would help bring Indigenous culture to be the main characters of their own story. So Trachtenberg brought in Jhane Myers as a producer to help make the film as historically accurate as possible. She was also pivotal in having “Prey” as the first film entirely dubbed in the Comanche language.

And for Myers, being a part of “Prey” and weaving in the Comanche culture was a dream come true. “It was as historically accurate as we can get it because if you think about the time when this was, there weren’t a lot of photographs and paintings. You know, just some of the paintings that were out were slighted, like, if somebody could only paint like in one style,” Myers said. “Being a traditional artist and a producer, and all my many hats. I was able to infuse it with all things Comanche, whether it’s the color of the earth paints that we use, whether it’s the designs, whether it’s the twisted fringe, whether it’s fighting style, whether it’s language. All of that just came together.

“One thing I thought was interesting was whenever we were setting up, you know, the stunts and the fights and stuff, the stunt guy, Steven, I think he did The Hobbit, he’s used to working with bows,” Trachtenberg said. “And it was just so interesting to see because obviously, you can’t really go hand-to-hand with this big old space alien ’cause it’ll just level you. So, it’s a lot of precision. It’s a lot of speed. It’s a lot of physical movement. And just the way it came together, I think, was like absolutely wicked. And you know, it shows you what them Comanches can do.”

Not only was it important for Prey’s visual language to be authentic, but it was also important that audiences Audiences have the opportunity to watch “Prey” in Comanche and hear the characters speak as they would have 300 years ago. “For me being Native and being Comanche, you know, an enrolled Comanche tribal member, that’s what’s important. I’m a big movie fan. I grew up on the Predator franchise. I’ve never seen a feature fully in my language. And one thing we do as native people when we watch films, we watch to see like, maybe can they just at least get, you know, one or two things right or something, you know, that’s authentic.

“This movie, just being a ‘Predator’ film, it’s filled with authenticity. So for me to have the language in there, that was most important. And we even pitched it that way, right Dan, to the studio,” Myers added. “But you know, but now when you do watch it on Hulu, you have the option of picking Comanche to watch a fully dubbed version in Comanche.”

With “Prey” being a more stripped-down version of a “Predator” movie, Trachtenberg teased that audiences will be in something more primal than any of its predecessors. Not only that, but the film will have more practical effects, which would add to the film’s grittiness. “Most of it is practical. Some of it is CG. So, yeah, I mean, frankly, I have a different point of view than I think most horror filmmakers or people that have worked, you know, and even fans,” he said. “I’m not someone who thinks that CG is awful, and I fetishize practical visual effects and all those and suit work and all those things.”

And Trachtenberg feels the same way as other audiences do when the CG gets so bad that it takes you out of it and thus ruins the experience. “I oftentimes feel just as pulled out of a movie by feeling like I see the man in that suit as much as I’ve been pulled out of a movie they’re feeling like I feel the artifice in the digitally recreated creature or visual effect,” he said. “So I really wanted to really combine both thoughts and mainly rely on the practical suit. But, like, even just using visual effects to enhance like his calf muscles. And sometimes the hands are changed, and sometimes we see the throat throbbing.”

“It’s the reason why we nicknamed him Feral. I really wanted to feel that it was ferocious and alien and not a guy lumbering around in a suit, which sometimes in some moments in the other Predators it can feel like,” Trachtenberg added. “So that was the main impetus to combine both schools of thought, which, I mean, a lot of filmmakers combine both practical and CG, but Predator has mainly, up until the last one where there was one creature that was entirely CG, has mainly relied on being a man in a suit. And I really wanted to combine both things for this movie.”

I would be remiss if I didn’t talk about “Prey’s” scene-stealing star Coco, who plays Saari, Naru’s loyal canine companion. Though she makes for an excellent co-star while filming, what happens off camera is an entirely different story. “So much of Coco being around was her like, running wild, and doing laps and like just so excited to see everybody all the time,” Midthunder said. “So, like for me personally, she was a dream. For like making a movie, you know, the character of Saari is very different from the character of Coco, and that shows what a good filmmaker Dan is.”

Of course, once you have a dog play a vital role in the film, everyone will be emotionally invested in its survival. Or audiences want to see more of the dog. “And the watching in the movie everyone, as we were developing it or showing cuts to friends family all those things, was like more dog. We love the dog. Add more dog,” Trachtenberg said. “I’m like, ‘you don’t understand, we can’t. We are using every usable frame of this dog. There’s not one extra frame that had the dog doing what it’s supposed to do.’ But she was awesome.”

“And the challenge, as Amber stated, was it’s a dog that we believe is accurate to the time and Carolina dog they’re called. And it’s not like they’ve been training this dog for years like they do most movie dogs, you know? So we had to do the best with what we could. And it worked out, thankfully,” Trachtenberg added.

I am looking forward to PREY since I am a huge fan of the series, especially the original.