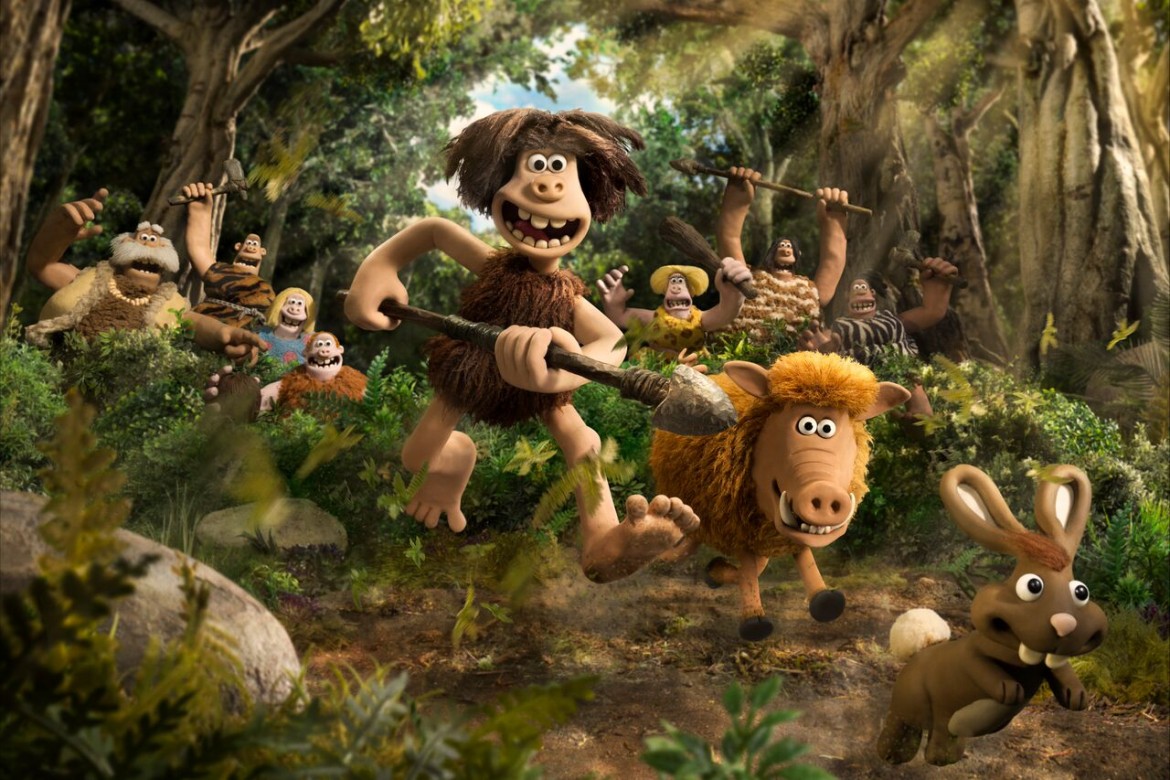 An Aardman stop-motion comedy featuring prehistoric cavemen and creatures? Yes, please! My husband and I adore Aardman’s style of storytelling, claymation form of animation. We have probably seen everything the Aardman team has ever produced. Early Man is the studio’s latest movie featuring a tribe of happy cavemen whose primitive lifestyle is challenged when Lord Nooth (Tom Hiddleston) from Bronze Age City wants to expand and tear down their village. Progress isn’t always pretty. Doug (Eddie Redmayne), one of the tribe members, discovers that his ancestors played “Football”. He isn’t sure what this means until he accidentally winds up in the Bronze Age City. Little did he and his village know how the sport will change their lives forever.

Here are some things about the film that can spark conversation with the kids.

1) Claymation – all of the characters are made of clay and then animated by designers who photograph every movement, frame by frame. I attended a screening where the child behind me asked if “they were made out of Play-Doh”. I love how curious she was about what she was viewing on the big screen. Claymation is eye-catching, playful and a painstakingly slow process, but the results are delightful. Try this technique at home, and create your own stopmotion shorts. 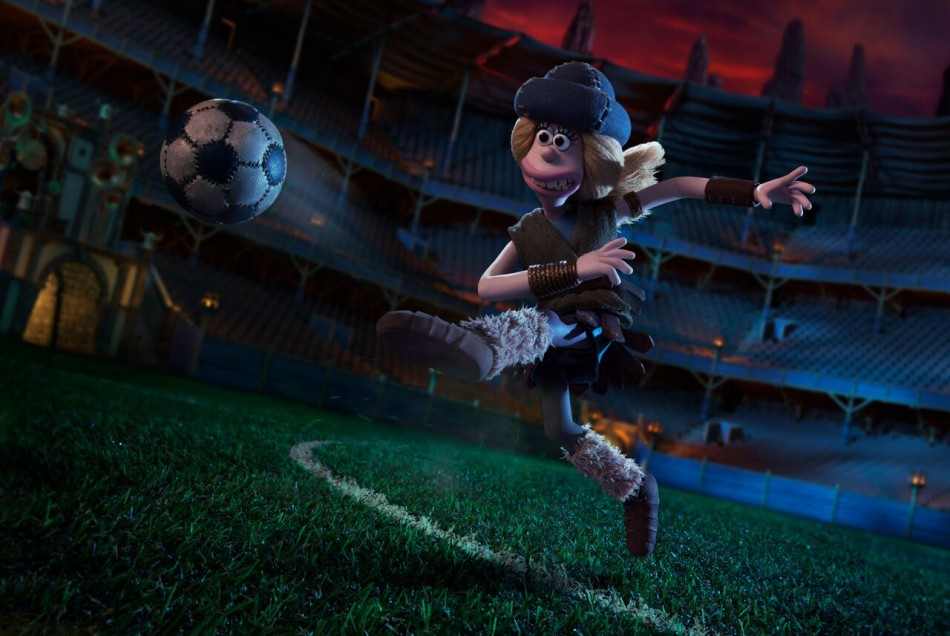 2) Let’s hear it for the girl! Why were girls not allowed to play football? Goona is from the Bronze Age City, who sneaks onto the football field late at night to practice her plays, when she’s discovered by Doug. She can’t play because according to the rule book, it’s a boys only game.

3) Did Cavemen die young? Chief Bobnar (Timothy Spall) is the elder leader of the tribe. We find out that he’s only 32 which seems to be advanced geriatric age. Why didn’t cavemen live longer? What is the average lifespan of a human these day? 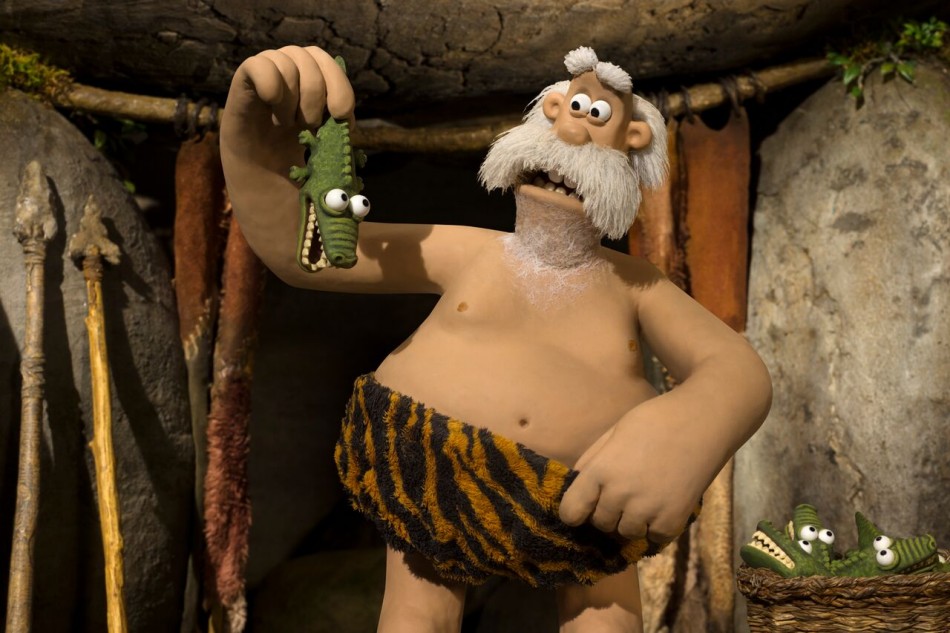 4) What the eyes tell you – All of the animals featured in Aardman’s animations have a ton of personality. They don’t speak, but their expressive eyes say it all. Sean the Sheep says so much through his eye movements, as well as his crazy antics. Doug’s sidekick Hognob (a boar) is underappreciated, smart and extremely loyal friend to his owner. Hognob’s eyes say a lot about what he’s feeling throughout the film. Acting with just your eyes is really hard. My husband tried out for The Blue Man Group, where he could only show emotion through his eyes. Can you share how you’re feeling with just your eyes?

6) Stone Age and Bronze Age – Who doesn’t love a film that features dinosaurs as well as other massive prehistoric animals? But, after thinking about the periods of the film, the timing seems to be a little off. The two ages didn’t really overlap, but this is another discussion with your young archaeologists to discuss the different tools that were used during the different ages.

Giveaway: $25 Visa to see the film in theaters plus a soccer ball and Early Man T-shirt.

I read basically that the claymation is great, as usual for the creators of wallace and gromit. The movie may have things that don’t mix or seem right, but it is not a historical piece based of historical facts,, just a fun fiction movie to take ones mind off daily issues and to just enjoy.

I love the claymation aspect. I really enjoyed Chicken Run and this is reminiscent of that.

My son and I are looking forward to seeing this movie. We like the Claymation and I think my son will like the dinosaurs.

I would love to see this movie with my son

I read in the post that Claymation – all of the characters are made of clay that sounds like a lot of work.

I think it’s hilarious that Chief Bobnar is just 32 and looks like he is super old.

I just realized that the movie is a claymation movie.

My daughter and I would enjoy this movie. She would like the cavemen and dinosaurs and we would find it funny.

I once saw a documentary on how they make claymation movies. It must take forever!!

I learned that the elder leader of the tribe was only 32.

This is the first time I have heard of claymation.
Sure to make an interesting movie for everyone.
thank you

I learned that this movie is about Cavemen.

All of the characters are made of clay and then animated by designers who photograph every movement, this is quite new and exciting for us. We love animation movies.

I like claymation movies! I liked reading about the animal characters.

This looks like a movie we would enjoy. We like the Claymation of it. Chicken Run was a pretty good movie.

I love that all of the characters are made of clay and then animated by designers who photograph every movement, frame by frame.

I love claymation! Can’t wait to see this movie – I think I’m more excited than anyone else in my family.

It’s really true that this type of animation has really good facial expressions.

MY KIDS WOULD LOVE TO SEE THIS CLAYMATION MOVIE ! MY DAUGHTER LOVES PLAY-DOH SO SHE IS SURE TO LOVE PLAY-DOH COMING TO LIFE 🙂

This movie looks to be very entertaining. My son will love it.

I like how the animals in this movie don’t ever speak but show their personalities and expressions through their eyes!

Oh I also really love the claymation! So much detail, and I love what you wrote about the eyes! That is so true. You can tell so much about your characters by their eyes and eye movements! Lots of great points we can bring up with our children when we see this movie!

I would like to see this movie with my family

I’d love to see this. We also love the claymation form of animation.

The cllaymation in this is amazing. <y daughter and her best friend are amazed with it and want to see it so bad. I never realized the detail to taking photos using it.

I read that EralyMan is a Claymation comedy about caveman and international football/soccer. Thanks for the giveaway. I hope that I win.

I read that Claymation – all of the characters are made of clay and then animated by designers who photograph every movement, frame by frame

I read about some great ideas for things to discuss with children about this movie. I love the idea of it being a fun but also learning activity!

I’m very excited for this movie, love the other Aardman claymation movies and this should be great.

I love that this is claymation and can’t wait to see it!

This movie looks hysterical and I adore claymation. You are right even characters that don’t talk say a lot with their eyes.

Love to go see the movie.

I read about claymation! COOL! 🙂

The Claymation is this movie is amazing , and my kids and I are looking forward to seeing it.

I read that cavemen seem to die young as 32 is not old these days. People seem to live longer now.

This looks like a great Claymation movie – my kids would probably enjoy it.

My kids are excited to see this movie! Especially since they have soccer in it!

I learned what claymation was – I had no idea!!

I’m looking forward to watching with my kids and love the talking points! I’m always trying to get my kids interested in science.

I’d love to take my daughter to see this.

I like the claymation form. My son will definitely love the dinosaurs. Thanks for the chance to win such an amazing giveaway.

All of the animals featured in Aardman’s animations have a ton of personality. They don’t speak, but their expressive eyes say it all.

My sons would love love love this claymation movie.

Great questions that can arise.. claymation. I personally have wondered about the production myself. Your post created bzz in my mind.

W love Wallace and Gromit, so knowing that these are the same claymation geniuses makes me really want to see it

Oh wow, I didn’t realize that Claymation characters are photographed every movement, frame by frame! That gives me a whole new appreciation. My nephew would love seeing this movie!

The claymation is awesome we cannot wait to see this movie its interesting how they do that with clay..