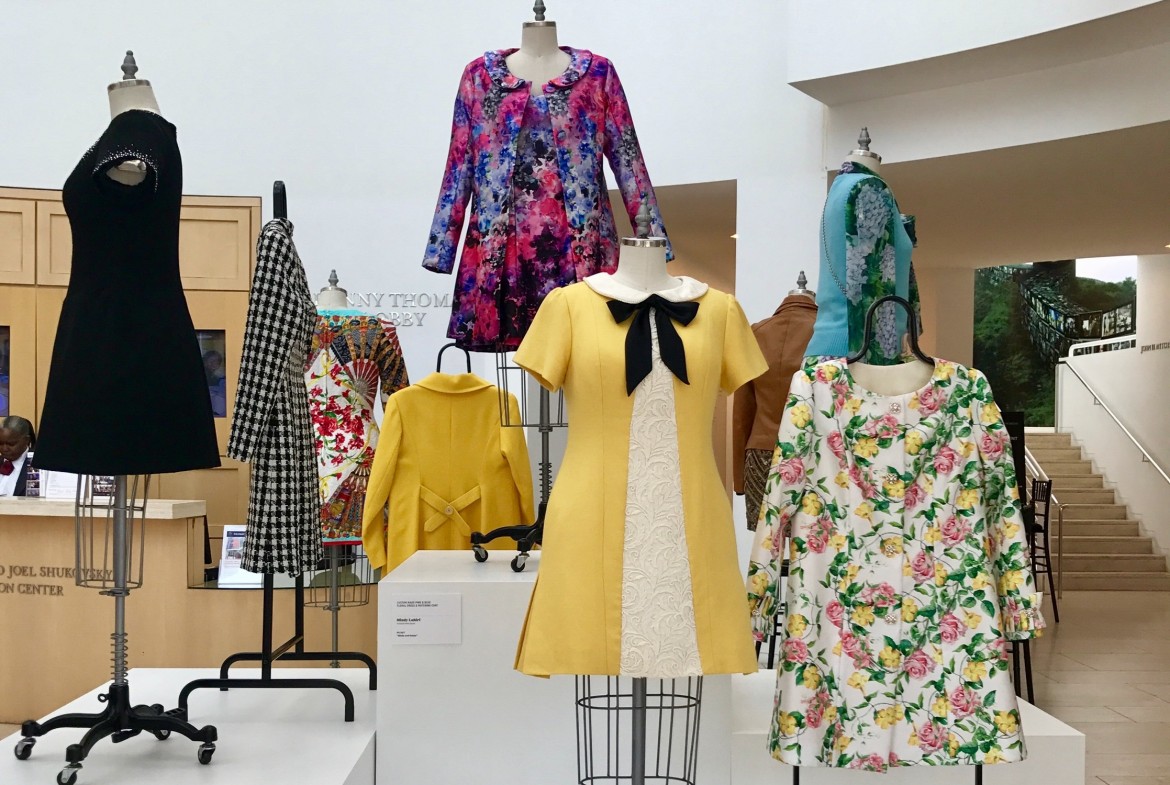 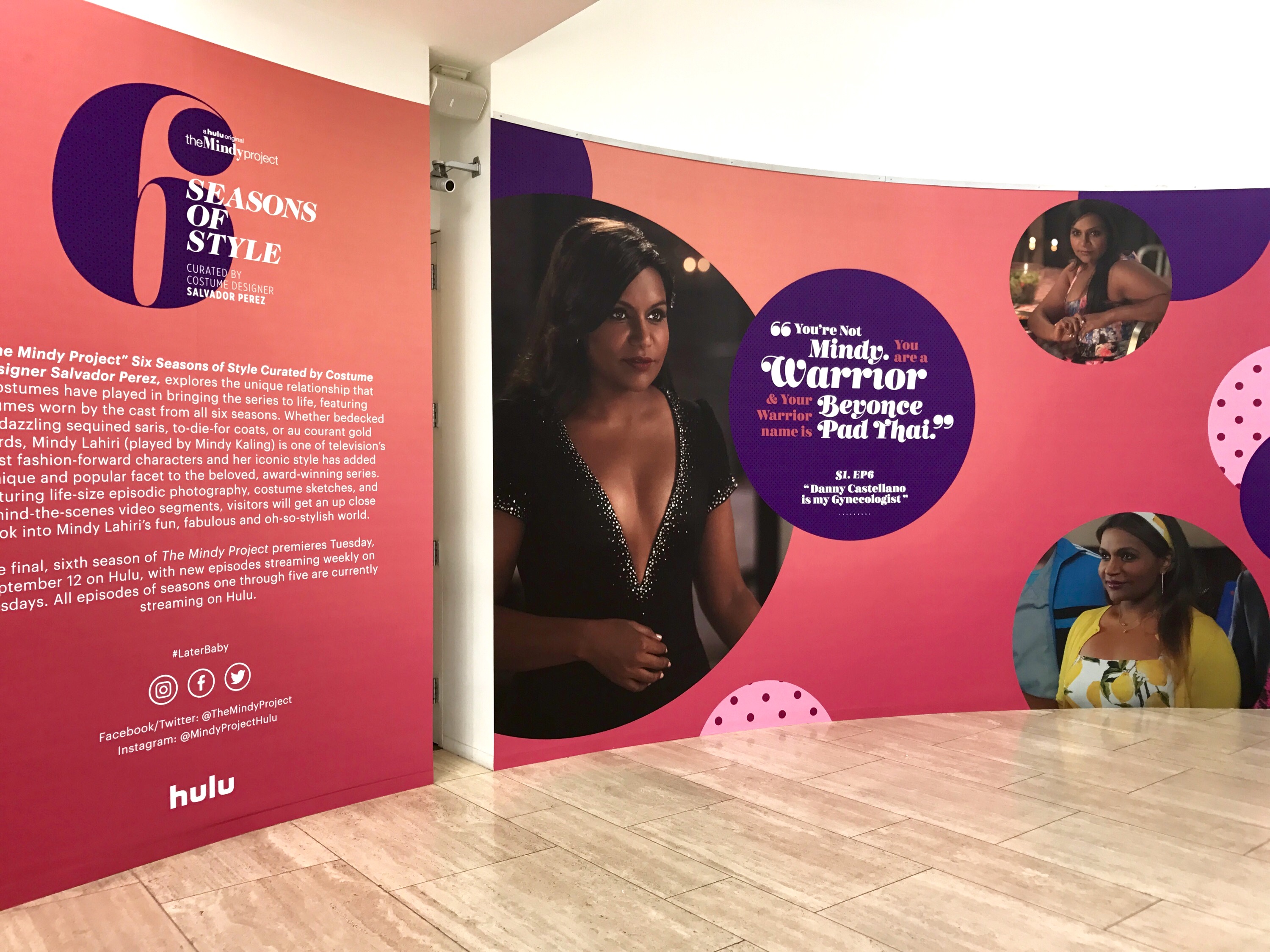 Who doesn’t love the amazingness that is The Mindy Project“?  From the funny but heartfelt writing, the exceptionally quirky characters and the truly striking fashion, it was binge heaven for me (who was late to the party). When I was asked to cover a VIP tour of the “6 Seasons of Style” exhibit at The Paley Center for Media with Salvador Perez (the Costume Designer of “The Mindy Project”), this Mindy fan (and self described non-fashionista) was excited to learn 6 style secrets from a master:

Style Secret #1: Stand Out in A Crowd
Salvador Perez said his first aim when he was hired was to have Mindy Lahiri stand out in a sea of black clothing in NYC. As a New Yorker at heart, I can attest to the devotion to what Perez calls “the crutch” of black. Knowing that dark colors “go away on camera”, this outfit with color and texture – a bright yellow cardigan, horse print shirt and dark plaid skirt was chosen to set the fashion baseline for the show (as seen on S1, Ep 2). 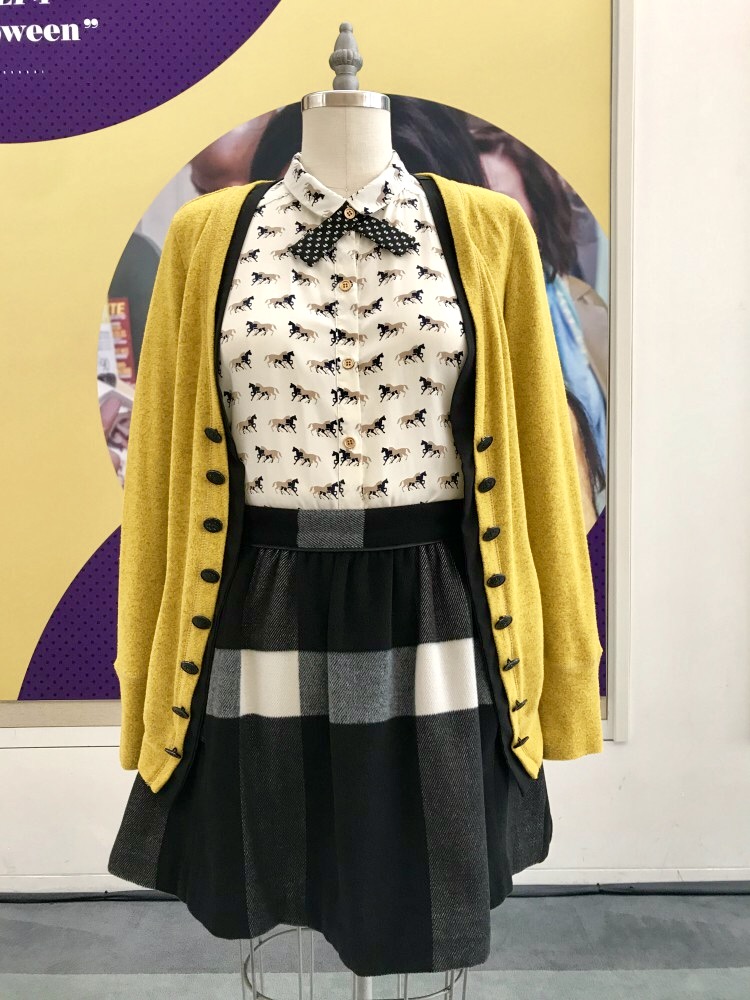 The bold choices presented Mindy as a strong woman not only in word but in presence.  I’m not sure if it was done by design but bright lemon yellow seems to be the most featured color throughout the series (there’s even a yellow lemon print dress with matching handbag that is featured in the exhibit from S4, Ep 22).

Style Secret #2:  Build It Up, Buttercup
Customization is key. Perez refers to himself as a builder – for him, it’s easier to build something from scratch rather than to alter it.

A coat was one of the first custom built pieces on the show.  It’s interesting to note that 20 out of the 40 looks showcased feature a custom made element – whether it be a necktie, dress, handbag or even an entire outfit inspired by the 70’s film “American Hustle”!  It floored me to find out that Perez has a dedicated knitter for the show who made one of the dresses in the exhibition by hand! 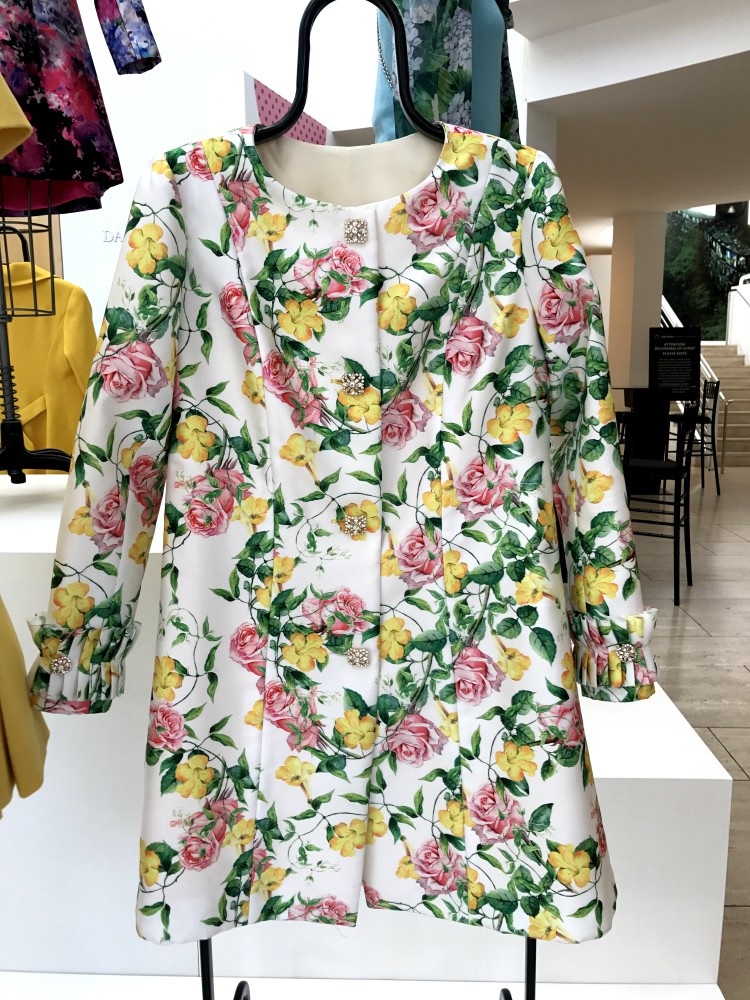 Since we can’t all have clothing built or made for us, Perez shared a real world fashion tip –  always alter your coat sleeves. Most coats are boxy and can make a person appear wider than they actually are. An easy slimming of the sleeves alteration will ensure a much more streamlined look without the price of paying for couture.

Style Secret #3:  Get To Know Yourself
According to Perez, fit, proportion and color are the fashion foundations. Knowing your own body and learning what looks good, allows one to truly shine. Mindy Kaling is a fellow petite girl (she’s 5’ 4”; I’m 5’ 1”) and short waisted.  Perez conducts multiple fittings to confirm that each part of a piece of clothing is right.  This expert knows where a dress hem should lie, the measurements from underbust to waist and what highlights Mindy Kaling’s body at any time (which comes in handy now that Kaling is pregnant in real life – they used a dreaded pregnancy pad when Mindy’s character was pregnant on the show in S3 and S4). 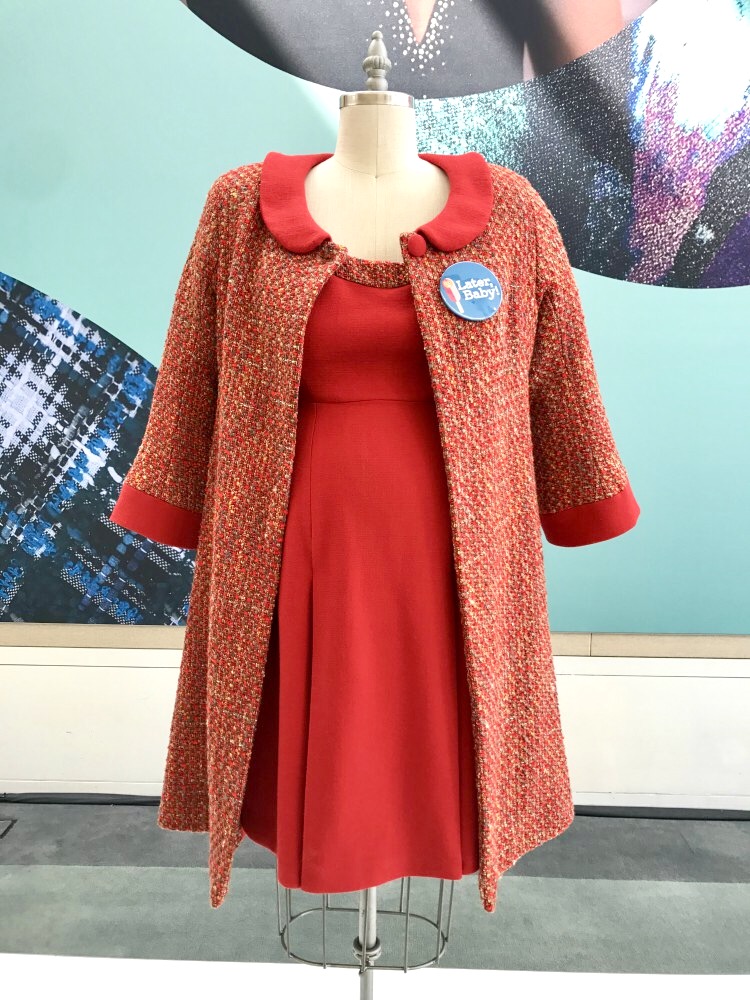 Early in the tenure of working with Kaling, Perez learned that European sizes worked better for Kaling’s body type vs the typical American sizes.  Perez said that in addition to building costumes, he also does shop for designer clothing (the exhibit features some Dolce & Gabbana and a number of Chanel bags) on the luxury website farfetch.com.

Style Secret #4:  Do You
Mindy Kaling actually really likes clothes and shoes.  Perez says her collection is “ridiculous”.  Kaling appreciates color and the designs (both fashion and home decor) that you see on the show are a true reflection of Mindy Kaling herself.  Perez said, “When Mindy likes something, we get it in 12 colors”.  Notice the below photo is the same sweater as the yellow one above but in magenta. 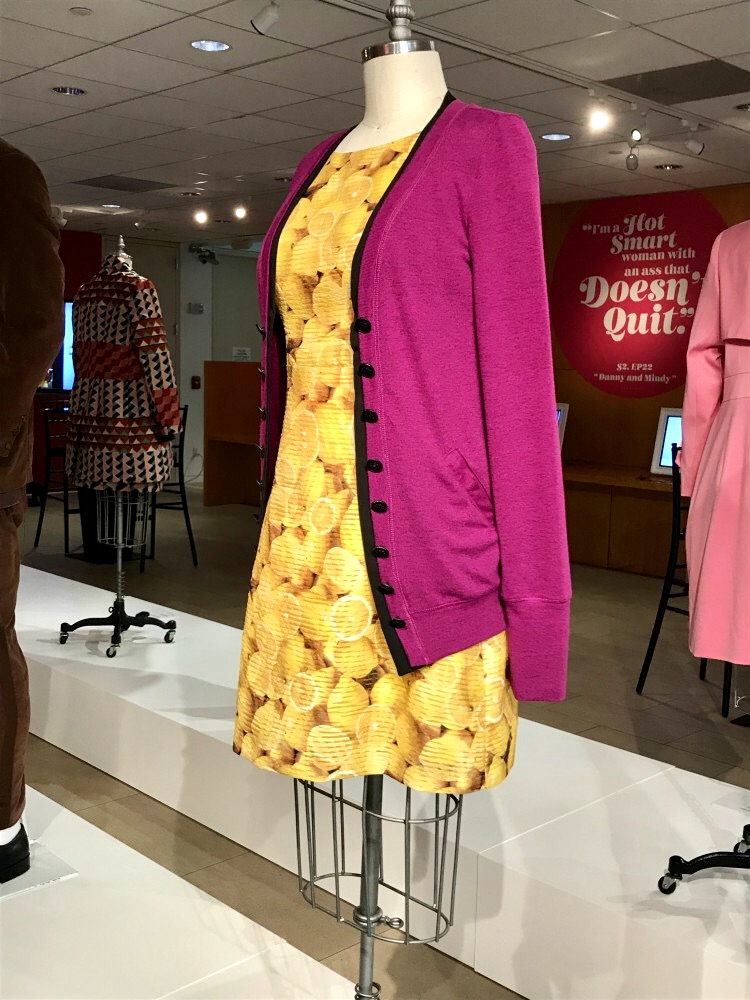 Body confidence is expressed through fashion on the show.  Kaling used to be covered up more often in the early days of the show but Perez said after playing up Kaling’s great skin and legs with the adage “skin to win”, she’s learned to show more of her body both on the show on the red carpet.  Look out for The “Mindy Dress” from S4, Ep 1 at the exhibition to see for yourself!

Style Secret #5: The Drama Is In the Details
One of the highlights of this VIP tour was to have Salvador Perez point out the details of his costumes that you don’t see on camera.  Perez said that Kaling loves his hidden touches and that they make her “light up” in the most wonderful way. 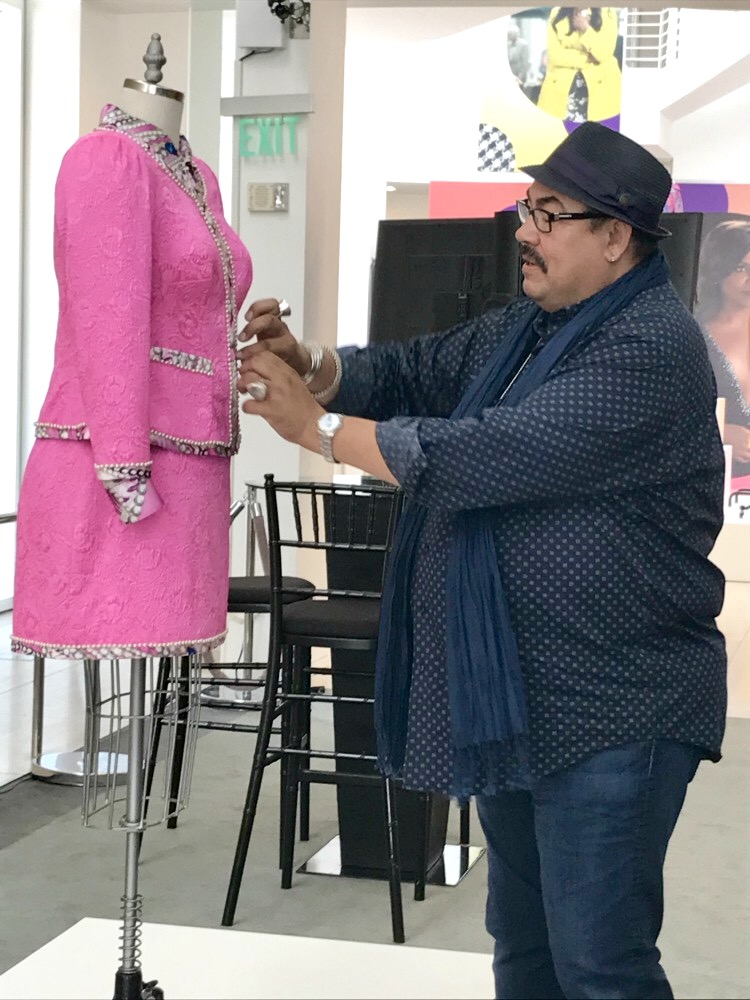 The joy that Perez has for what he does was evident as he told us how he loves sparkle and that he often spends more money on buttons or trimmings than fabric as he described how the aqua side trim on the custom made sequin track suits for Mindy and Morgan (showcased in the exhibition from S6, Ep 3) cost more than the fabric to make the two track suits.

Even before costumes are made, Perez is all about the details.  Aasha Ramdeem, the current sketch artist for Perez was hired because she was the only one who could correctly capture Kaling’s skin tone (as seen below).  Perez also shared that all sketches have Mindy in the same pose – to mimic a paper doll.
Mindy-Aasha photo (Perez had Aasha sign the wall with her sketch) 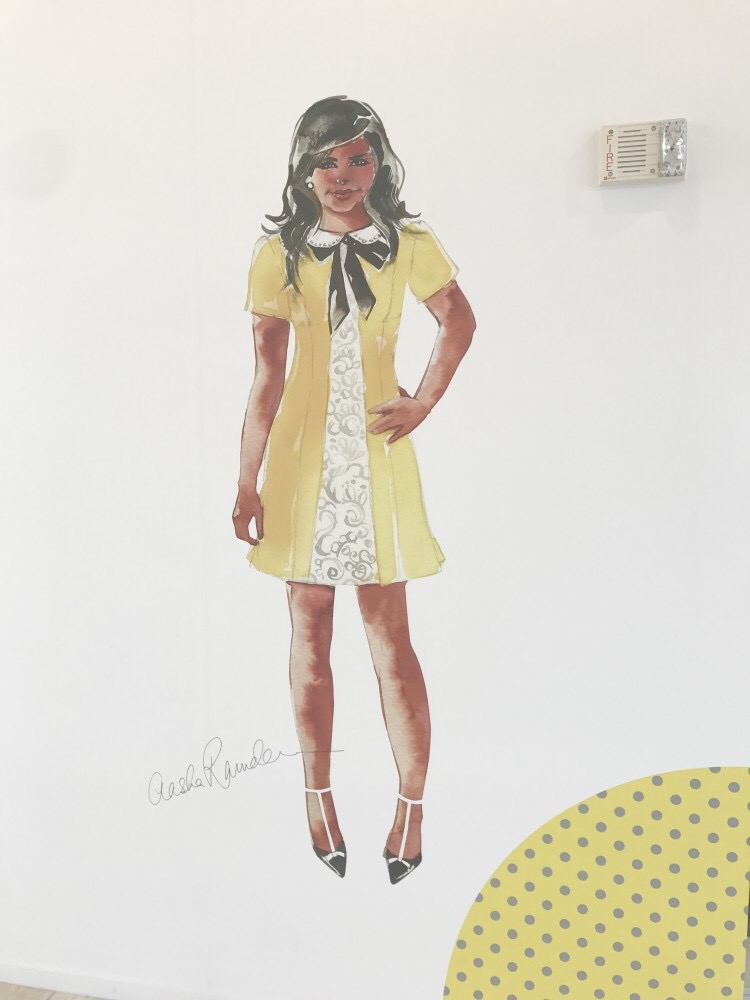 The details aren’t only for Mindy’s character on the show.  Perez pointed out that Mindy “has a type” and that all of her boyfriends like button down shirts, jeans and brown coats; Jeremy Reed is often outfitted “like a peacock” in blues and purples and the touch of suspenders on Jody Kimball Kinney to help showcase his southern roots became a part of the storyline in S4, Ep. 9.

Style Secret #6:  Expect the Unexpected
Fashion is all about breaking barriers and doing what isn’t expected.  In 6 seasons, there have been over 1200 looks and believe it or not, there have been only two repeats – this Rose dress in S5 and another hydrangea print is used in two dresses in S6. 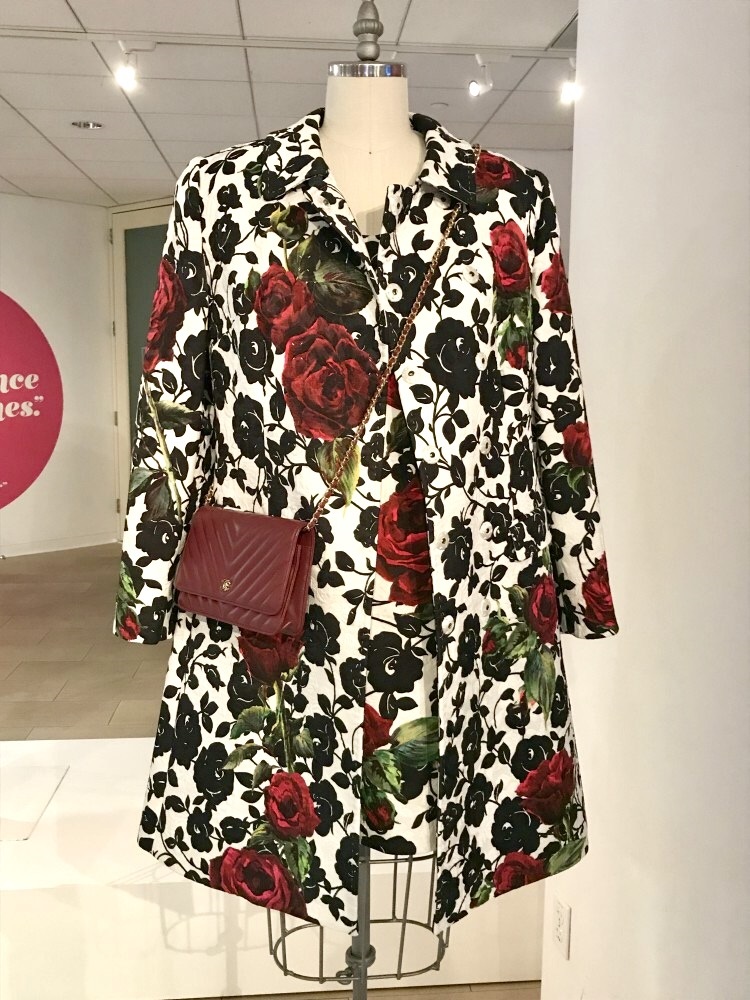 If you thought corsets went out with the middle ages, you’re wrong.  Perez builds corsets into most of his dresses for Mindy (even during her real pregnancy)!  It’s no surprise that Perez hates maternity wear but I did find it interesting that he just uses knits one size up from Mindy’s current size.

There’s been a “Christmas dress” during every season for Mindy but Perez made sure to tell the group that the dress has never been red (however, it has been green).

It was with a little sadness that Perez revealed that the last 2 dresses of the season will be the most lavish ever seen on the show.  His dedication to this show was evident.  Perez mentioned how he “bled for Mindy” in building the crystalized dress that will close the show.  If you expect “The Mindy Project” to go out with a splash of color, brace yourselves for the unexpected – SPOILER ALERT –  the last dress will be New York black.  For me, that sounds just about right. 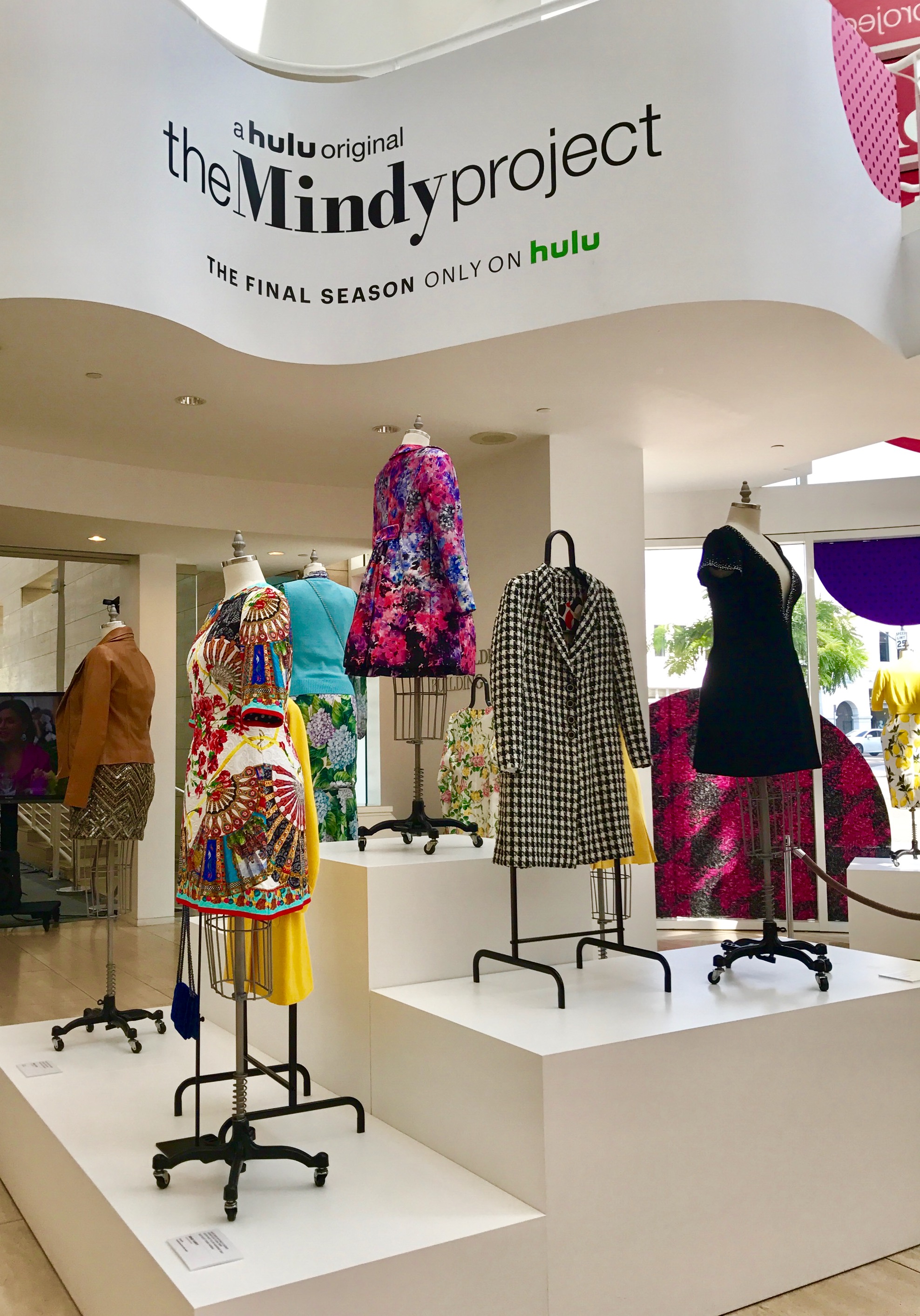 Melissa Burton is a Registered Dietitian and Registered Yoga Teacher who says she was born to love food, fitness, family and Duran Duran. She is a transplanted New Yorker living in Los Angeles with her husband and son since 2012. A lapsed wellness blogger (www.thevalentineRD.com) but still social media addicted, you can see more of Melissa’s current adventures on Instagram at @mburton0214