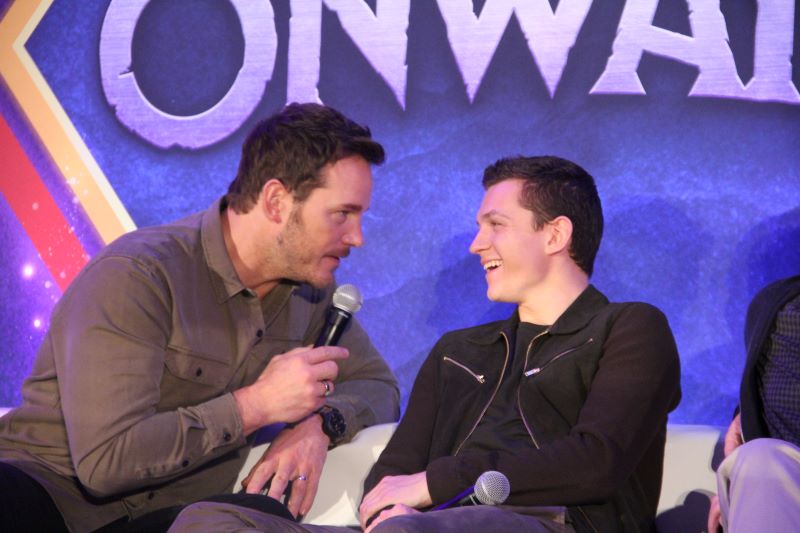 Pixar’s Onward centers on two elf brothers, Ian (Tom Holland) and Barley (Chris Pratt), who leave the comforts of suburbia and embark on a quest to find out if there is still magic in the world. While it may be the studios first time diving into the realm of fantasy, there is a humanistic story element to it.

It’s Ian’s 16th birthday, and he was given a magical staff and a one-of-a-kind gem as a prearranged gift from their late father who died before Ian was born and Barley was too young to remember. This spell has to power to bring anyone back for 24 hours, which would give the brothers the chance to meet their father. Unfortunately, Ian doesn’t complete the spell, leaving only a pair of legs. As a result, the two go on a quest to find the rare gem to bring back their father before time runs out.

ThatsItLA had a chance to talk to Holland and Pratt at the press conference for Pixar’s Onward. There, the two talked about the recording process, who they would bring back for a day, and what it’s like to be a part of a Pixar film.

Both Holland and Pratt could relate to their characters, in a way. Though the former plays the youngest, and the latter is the oldest, they actually switch those roles in real life. For Holland, he is the oldest of four, with Pratt being the youngest in the family. “It is really nice for us to make that switch,” Holland said. “Chris and I are already so close, before we even came on this film, it was almost as if we were playing ourselves. But the similarities in Ian and myself go back to more when I was in my early teens, 12, 13, I was a little bit of an introvert, I was a nervous kid, and I had a hard time in school.”

Holland found himself being more confident and believed in himself once he got the lead part in Billy Elliot. “What drew me so much to this character was that we get to see that entire journey that I went on as a kid in Ian throughout this film,” he said. “So, I was really happy to pour my past experiences in this process and I am really delighted and thrilled to where we got.”

Pratt was inspired to become an actor from his brother, who was a performer throughout high school. Though his older brother went on to become a soldier in the army, he was never jealous of Chris, and the actor saw a lot of in his own relationship with his brother. “And there was that moment where Barley realizes that Ian has the gift, and I thought, “do you think Barley wished he had the magic gift, because he is the one who loves magic, he wasn’t able to do this but his younger brother was,” he said. “I think this is what really is the heart of the film. He loves his brother so much that he is just proud of him that he has this gift, that he has been given this gift. When I saw that in the movie and how it was expressed, it made me appreciate how my brother was with me because my whole life he’s always only, and during my career, ever been super encouraging and positive about what I have been able to do as an actor.”

But what Pratt appreciated the most about how this brotherly relationship was depicted in Onward, was that it wasn’t testy.  “What you see in movies is the older brother doesn’t let the younger brother hang out with him, doesn’t take him to school, says, ‘get out of here nerd’ or ‘get out of here twerp.’ It’s like that contentious brotherhood,” he said. “You see that all the time. It’s kind of a caricature of what real relationships are between brothers, but the truth is, brothers love each other. I loved that. I really like that and I probably identify more with Ian in terms of my own relationship with my brother.”

And though Holland and Pratt voice two elf brothers in Onward, they rarely recorded their lines together. “I think there were moments where we were brought together, and I think maybe that has to do with getting a model of how our relationship would be like. How we interacted with one another and goofed around,” Pratt said. “It’s not the most conducive to creating audio tracks that will be used in the movie, so ultimately, you see something that you would like to model the behavior on, and then capture that with us separate, that was often the times the case, I think.”

Recording practices can vary from studio to studio. Additionally, its not easy to get actors and comedians together due to different schedules. But for Pixar, they often like to play it straight from the script itself. “For instance, The LEGO Movie, we did a lot of riffing and there was a lot of improv comedians in there. There is certainly magic that comes off that is found in the moment that does not exist on the page, and I don’t think there is a lot of that here in this because what is on the page is so magical and so protected,” Pratt said. “We didn’t colloquialize a ton, maybe a little bit. But for the most part, everything we say was written in the script. So, they isolated us to do that.”  He did say that he and Holland would go on to work together on some of the promotional stuff. But really, the two already had that chemistry given that they’ve worked together in Avengers: Infinity War. “They did throw us together, and they were able to see – wow look at these two, they are like brothers in how they interact, and some of that was probably expressed in the movie,” he said.

That sense of family is also what drew Holland to voice Ian. Not only was it a dream of his to voice a character in a Pixar film, but the animation studio was a lot like Marvel where they welcome new family members with open arms. “I think that every young actor you set yourself goals, and I have mine that I set out since I was a kid, and they are still the same today, and one of them was being in a Pixar movie,” he said. “So when you guys were kind enough to fly over to London to meet me and to tell me your story and pitch me the movie, I was just so honored. It was the first time that anyone has come to meet me. I was like, ‘this is amazing, this is Pixar.’”

“So, it was a very easy decision. You don’t say no to Pixar. The nicest thing about it is that they have this sort of family feel to it that Marvel Studios has, and I feel like we were welcomed into this wonderful family with such open arms and it was such an amazing process,” Holland said. “I still can’t quite believe that this film is about to come out. It feels like yesterday that we started working on it. So, I am just super pumped to be able to see it and to experience this amazing thing that we all created.”

In Onward, Ian and Barley embark on this life changing journey across freeways and highways to find out if there is still magic out there so that they can finish the spell that will complete their father. Because magic is a dying art that has been replaced by the comforts and ease of modern technology. In a way, the film is trying to get its audience to experience the many adventures they could have in the world through their own eyes. “I think the film is kind of a metaphor for “look out, the world is an amazing place,” Holland said. “It’s a beautiful place. Experience it through your own eyes. Not through someone else’s Instagram.”

“The only way onward is to look forward. And you can look forward when you are looking at your phone,” Holland added. “To me, like I’ve deleted my Instagram, to Disney’s dismay, they are like, ‘how are you going to promote the movie?’”

And there is no better way to experience the great big world then by going on your own quest just like Ian and Barley. Pratt says you might be surprised to how the sidewalk outside your residence is just part of a complex network of cement that eventually connects to major landmarks and monuments. “There is one really good thing that I learned right when I was learning to drive was that the chunk of cement closest to your house, connects to every major monument in this country through a system of roads,” He said. “Whatever cement your driveway connects to road that connects to another road that connects to highway. With enough gas and money, and an automobile, you can see Mount Rushmore, the Grand Canyon, Yellowstone, the White House, you can go down the Florida Keys, you can sneak through Montana in about 17 days.”

Sure, flying to some of these areas may sound a bit more convenient, but Pratt encourages drivers to get on the road and see what is missed when flying in an airplane. “There’s this great beautiful country that is designed to be driven across, so definitely live in the city, and not have to drive in the city, don’t sleep on getting behind the wheel and just exploring the country, because we used to road trip everywhere,” he said. “It’s America, it’s the big wide frontier. And you can literally get anywhere with enough gas money.”

The roadtrip itself is essential for the two brothers to find the elusive gem that could bring their father back to life. But since there is a bit of urgency considering that that he was only brought back as a pair of legs, and the spell only works for 24 hours. With such a premise it is only natural to get a question about who you’d bring back. For Holland, he’d bring back his great granddad, because his granddad never got to meet his father. As for Pratt, he’s bring back his father. “I would probably bring back my dad, who passed away just before Guardians Of The Galaxy came out, and then I would film Guardians of the Galaxy, and if he didn’t like it, [phfft], and then bring back a known criminal and beat him up on Instagram live,” he said. “Because if my dad didn’t like Guardians of the Galaxy, I’d be like, ‘Yeah, you can go back.'”