Universal Pictures has released a final trailer for Jordan Peele’s “Nope.” So far, much of what we’ve seen in the teaser, featurettes, and posters were shrouded in mystery, but there was a sense that the director’s upcoming film would have some social commentary woven into its narrative while also featuring a terror that comes from the sky. Of course, it be easy to suspect that it’s aliens. The white disc shaped ship is pretty much a dead giveaway. But as we’ve all come to learn about Peele’s films, expect the unexpected. 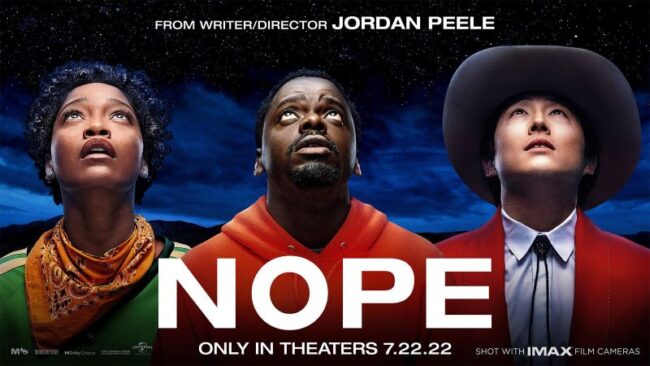 The latest trailer for “Nope” gives us a little more of the story, where we see Jill Hayward (Keke Palmer) and James Hayward (Daniel Kaluuya) try to capture a mysterious force from the sky on film. And whatever it is, James believes that it’s big. Big enough to kill their loved ones. However, others like Brian (Steven Yuen) see this mysterious force as a sign or try to exploit these strange occurrences as a spectacle to line their pockets.

And in a clever twist, when we learn that Jill and Brian are looking to get the money shot of undeniable proof of aliens on camera, it is played against The Undisputed Truth’s Ball of Confusion. The political context of the lyrics of that song is pretty profund, and will probably have to do with the themes of the film. But that’s just some speculation on my part. Regardless, this looks like yet another ingenious film filled with scares and has plenty to say about the social climate.

Here’s the plot synopsis for “Nope:”

The film reunites Peele with Oscar® winner Daniel Kaluuya (“Get Out,” “Judas and the Black Messiah”), who is joined by Keke Palmer (“Hustlers,” “Alice”) and Oscar® nominee Steven Yeun (“Minari,” “Okja”) as residents in a lonely gulch of inland California who bear witness to an uncanny and chilling discovery.

Written and directed by Jordan Peele, and produced by Ian Cooper, “Nope” lands in theaters on July 22, 2022.