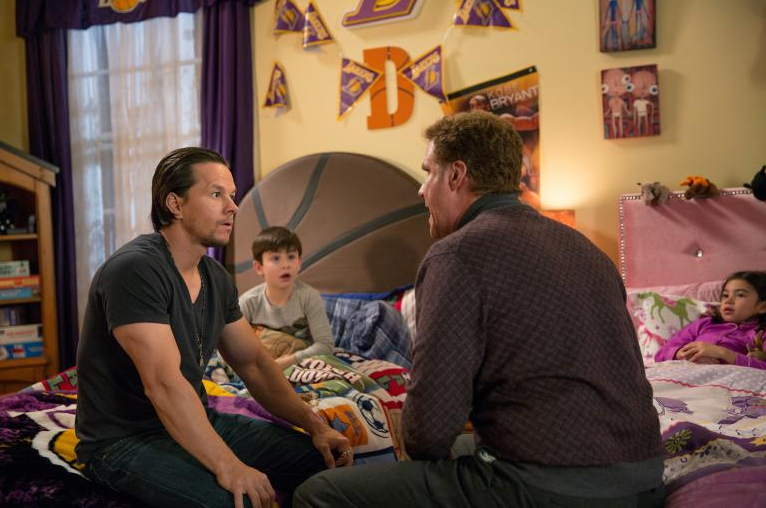 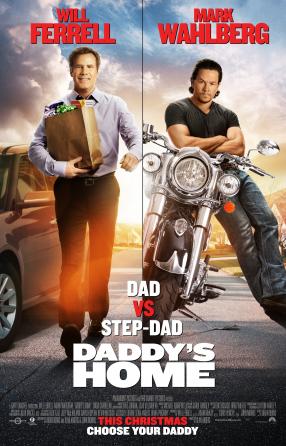 My guess is that it’s natural for biological parents to feel unsure about a person who has taken on the role of a step dad to your kids. In the movie Daddy’s Home we see those insecurities go wild! Little does Dusty know that Brad is actually an amazing step dad to his kids but he rolls into town, scrutinizing Brad’s (step dad) every step of the way. I have to admit that I love Will Farrell and Mark Wahlberg’s chemistry. One of my favorite films is The Other Guys. The two detectives are mismatched while trying to do their jobs and the pair seems to have a similar relationship in this film. It’s hilarious and almost sad watching the two trying to outdo each other to win over their kids.

The entire movie is about the two “dads” going toe to toe but eventually they learn to live and respect each other.We had a fun chat with Mark where he talks about his own parenting mishaps and a moment with The Rock. Plus, you’ll never guess what he hates doing on camera!!

Will Ferrell and Mark Wahlberg starred together in the 2010 film The Other Guys. Did the two actively pursue something to work on together or did this just happen?
MW: It just kind of happened.  We had a blast working on The Other Guys. I guess Will had had the script for Daddy’s Home for a while.  Brian, the original writer, actually worked with us and on Entourage for quite some time.  But he had written the script and then by the time Will was attached, they sent it to me.

So there’s a lot of parenting mishaps in the film.  Can you talk about any parenting mishaps that you’ve actually experienced?
I’ve had quite a few.  I’ve got a good one.  I just keep showing my kids stuff that I think is appropriate and my wife quickly corrects me.  My dad took me to the wrong school, and like put me in there, and I’m like, “Dad, it’s not my school.”  He was like, “Get in there, you’re alright.”  You know, “That’s your school.”  I was like, “Dad, it’s not my school.”

Dusty makes working out look like a piece of case! Was that really Mark doing pull-ups with one hand, while holding conversation?
Yes, maybe not to the extent of what I did. I had some assistance with some of it, because obviously, to be able to do that and talk normally, like, you know, with no effort whatsoever, would be hard, but that was part of – that was part of the joke. They put like a little cable on me.  It could be – yeah, especially the one scene where I’m just sitting there talking.  And I was relieved that I had some assistance!

There is a dance off during the daddy-daughter dance. Were those Mark’s moves?
I hate dancing.  On film, I hate dancing…and singing!  Those are my least favorite things to do.  I get a little self-conscious when it comes to that.  But Will made me feel very comfortable.  He just dives right in, you know.  He’s got no shame whatsoever.  And they wanted me to work with a choreographer and I convinced them to hire my friend, but I would never rehearse with him.  He’d sit outside my trailer, “Hey, man, we gotta work on this.  We gotta do this.”  I’d respond, “No.”  And then I just kind of winged it on the day.  But it was fun.  It was one of those scenes where I was like – this isn’t gonna work – and it ends up being one of the great endings of all time, the daddy-daughter dance – pretty spectacular.

Mark shares a story about his youngest son and The Rock.
Well, luckily my kids haven’t gotten in any fights yet.  There was only one reported fight at school.  Like, my youngest son, he was very frisky.  He was punching people in the private areas, but big people, like grown – the Rock – he came to visit on the movie that I was doing with the Rock.  The Rock was so nice.  He was like, “Oh, your kids are coming?” And I said, “Oh, yeah, they’re huge fans, man.”  And he brought over all these toys from WWE, like – [Wow.] [Awesome.]  wrestling figures and all this stuff.  And he came in the trailer, and they were hiding in the back.  And I was like, “Guys, come on out.”  And he was like, “I’ll get ‘em, I’ll get ‘em.”  So he goes in the back and says, “What are you guys doing hiding in here,” and he brings them out.  And then you know, my oldest son, Michael, he gives him a high five. Brandon goes to give him a high five, and he went ‘boom’, and punched him in the nuts.  And he, went down, and he’s like, “Yo, Dude, what the…”  And I was like, “Hey.”  But they haven’t gotten in any conflicts at school, which is good, you know.

What does Mark enjoy about being a dad?
I just get so much joy watching them grow.  And they’re doing things, and they have opportunities that I never had.  And you know, my wife had a picture last night of my two sons in the bed.  And they have their own room, which was something I always wanted to, give my kids their own room.  And they don’t even want their own room.  They just want to sleep together, in the bunk bed, or share a bed.

Does Mark have any advice for anybody that’s going to become a stepparent?
Good luck.  Better be in it for the long haul.

Daddy’s home is rated PG-13. I would definitely recommend this for families with older kids as it does explore a mature topic and has a ton of bad language. 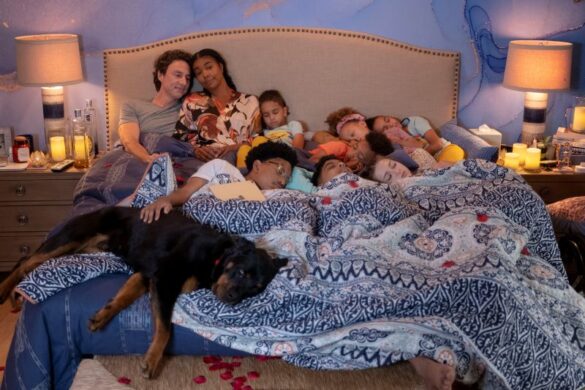