“Raya and The Last Dragon” was among the first of Walt Disney Animation Studios’ films to get a simultaneous Disney+ Premium Access and theatrical release in 2021. This provided an opportunity for those who didn’t feel safe to watch it in a theater to have the experience of seeing it first in their homes. And now, those who enjoy the home media entertainment and don’t have a Disney+ subscription, can now have the film, featuring Disney’s first Southeast Asian princess, on their shelves.

“Raya and the Last Dragon” is loaded with all sorts of bonus features like “Taste of Raya” – a culinary discussion between Kelly Marie Tran and the film’s creative team about the experiences of creating the world of Kumandra during a pandemic -, and “We are Kumandra” – an indepth feature about the Southeast Asian Story Trust and the cultural influences that helped inspire the film.

ThatsItLA had a chance to participate in two separate interviews about “Raya and The Last Dragon” with director Carlos Lopez-Estrada, producer Osnat Shurer, and Head of Story Fawn Veerasunthorn, as well as director Don Hall, and co-writers and co-producers Adele Lim and Qui Nguyen about what it was like for Raya and the Last Dragon to be a critical success and seeing what it is like to be represented on screen.

Osnat Shruer: Feeling is good. I mean, it’s always good. I came from “Moana” and went on to “Raya and the Last Dragon,” and it’s been really odd not to have been able to sit movie theaters with other people and hear where people laugh, and where they gasp, and we’re kind of guessing. At some point it’s us talking to each other and if it made us laugh, well if I made Carlos lasses, good jokes, we keep it in.

It’s been incredible to see the reaction because a lot of love and incredible talent of so many amazing people went into the making the film because it’s touching on it’s like, hundreds of people from their own homes, and the kids are going to school and there’s a million things we all have to do.

People poured so much love and craft into this film. It became kind of a, you know, life reflecting art, about trust and about trusting each other and working together. So, it is so cool that we get to share it with the rest of the world and that people are enjoying it.

Transitioning from live-action to animation

Carlos Lopez-Estrada: I feel like every challenge was new and exciting. Just because the worlds are so similar on the surface but so different when it comes down to the nuances of how a team works together the amount of people they get to work on these movies, he workflow that you know how characters are designed and rigged and animated, and then lit like there’s just so many layers to how animated movies are put together.

The biggest one for me was how the stories developed. Just because here at Disney, they like story. I mean, everywhere story is sort of like the foundation of a movie. But here, the amount of time that you can dedicate to the workshopping of characters and scenes are the moments the amount of times that you’re able to re approach something and reinvented and the whole, period, the whole process of making an animated movie has room built in so that you can screen the film, get notes, reimagine the story, get more notes and do that again for a year.

So learning that Disney process and, and opening my mind to sort of like allow myself to not think in like a concrete timeline that I’m so used to think like, I’m thinking like, okay, we have two months and we have to make this story work. This is more of like, you’re really thinking about it as a marathon and you’re really thinking like, how can we sustain this process? And how can we keep learning, and how can we keep growing.

Fawn Veerasunthorn: It’s an incredible experience. I worked in this industry for a long time, and usually I have to imagine what it was like to be in other characters’ shoes, which is not my opinion. “Raya and The Last Dragon” has allowed me to bring my thoughts to work. At first, I was a little hesitant. I was like, “how much do they really want to hear.” And at the end of the day, I had so much joy sharing a story of my childhood, the way people do things, the respect for the invisible world that we all allowed to be put into this movie. To me when I see them eating rice or sitting in a certain way, those little details just kind of make the whole experience to me as an Asian American. I don’t know how to describe my feelings. It’s hard to put into words.

As an Chinese-Indonesian-American, I was excited to see images like durian, pencak silat, and kris in the film, but I felt incredibly proud to see names like Griselda Sastrawinata-Lemay in the credits. I just wanted to hear your thoughts on bringing that representation on screen but also highlighting the importance of the behind-the-scenes representation and their contributions.

Adele Lim: I’ve told the story before, but on my first day in Disney, I was taking the elevator from the parking lot up, and I got in, there were a bunch of female story artists in there that were Indonesian, and people from Thailand and the Philippines. This has never happened to me in my career in Hollywood. It’s not like this team was brought together for Raya. These were already amazingly talented young artists who were already there in the story department in visual development. And we had this wonderful cultural trust that was helping really steep the entire team in the cultures.

But personally, I think for Qui [Nguyen], for Griselda [Sastrawinata-Lemay], for Fawn [Veerasunthorn] our head of story, it was being able to take all these images, you know, and of how we grew up, whether it’s the durian, the mangosteen, the Kris, seeing the Batik, seeing the wayang kulit for the opening sequence. These are all things that it was good to have, you know, outside references, but these are also images we grew up with and had so much love and affection for.

So being able to put them in the board and being able to share it with the rest of the world is a wonderful feeling. Because we all know those pictures of our children know them. But it always feels like, you know, the world hasn’t seen it because it hasn’t been celebrated on a screen, and now it has.

The fact that Disney keeps investing in Griselda, Fawn, myself, and Adele, that the diversity that you see on screen and behind the scenes is something that beautifully kind of was already there. When we got to come in, That was the thing that kind of completely amazed me because so often, like you’re doing a movie that’s based with Asian themes, and then you suddenly pull together a team that’s all Asian. But then after they make that film, they kind of just like we’ll go on to later, we’re done with that investment. It does. It’s over and gone.

Disney, this team, they’re still there, we’re still making movies together, we’re still telling more stories together. I feel like it’s an incredible thing that I always have to compliment. You know, Disney, Don, is definitely their leader, all that that that’s an incredible thing that I’m very, I feel very blessed. To have this experience has been very special.

What audiences can take away from Raya and the Last Dragon

Don Hall: Well, I think first and foremost, you know, we hope that they’re entertained at a high level because I think the movie is funny, it’s also very emotional, and has some of the best visuals. It’s the most beautiful film we’ve ever done. And it explores a theme that I think is very important and relevant to today.

What I think makes it a good theme is that if there was justification, on both sides of it, from you know, taking into account that this world is broken, that was always the movie, it was about, you know, the world is fractured, and the hope that it can get put back together. And what’s the barrier to that what’s preventing, and we felt trust was something very evocative, because you could explore it on both sides.

Raya doesn’t trust at the beginning of the movie. And hopefully, if we did our jobs, right, it’s justified, in that if I was in her shoes, I would be thinking the same thing and feeling the same feeling. And to really make it hard to trust. The whole movie is about making it can make it easy. It’s about making it hard to trust, like stacking the deck against it, and then against all odds, choosing to do that. And that’s what puts the world back together.

So, I think for us, it was felt rich, even early on, when we first started exploring it, you know, not knowing you know, where it was gonna go, it just felt like it was going to offer us the opportunity for very rich thematic.

Click here to read our blu-ray review of “Raya and The Last Dragon” and enter for a chance to win a digital code for the movie. 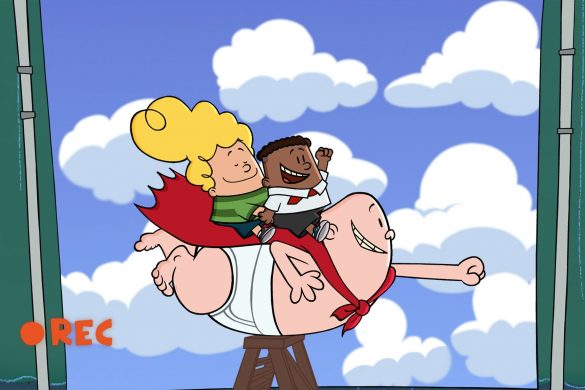