Top Posts
LUCK Has Plenty of Heart and Likable Characters
Jenny Slate Talks “Marcel The Shell With Shoes...
TRON Night On The Grid Panel At The...
Bullet Train: No Holds Bar Funny Action-Filled Bloodbath
Go on a “Journey Into Storytelling” at The...
Home entertainment HOCUS POCUS 2 Trailer Now Available from Disney Plus
entertainmentNew

The first “Hocus Pocus,” a Halloween-themed Disney film may have been critically panned and a commercial flop, but it eventually became a cult classic. As such, there was a strong demand for a sequel. So, Disney obliged, and now the studio has released the first trailer to “Hocus Pocus 2.” The sequel reunites Bette Midler, Sarah Jessica Parker and Kathy Najimy as the delightfully wicked Sanderson sisters for comedic mayhem and fun witchcraft.

“Hocus Pocus 2” centers on a trio of new girls Whitney Peak (“Gossip Girl”), Belissa Escobedo (“American Horror Stories”), Lilia Buckingham (“Dirt”) who plan to spend a birthday party trying to access their witch birthright by casting a spell. The only thing is, they inadvertently resurrect the Sanderson sisters who are ready to cause chaos again with their witchy powers.

The trailer doesn’t give us any more plot details than that. Neither does the teaser poster, but the “We’re Back, Witches,” tagline is some clever wordplay.

While “Hocus Pocus” was a critical and commercial flop, it found a place within the cult classic pantheon, and as such, fans demanded that Disney make a sequel. Not only did they make Disney’s witch movie an annual watch during Halloween, one could say that the same dedicated fans helped make “Hocus Pocus 2” happen.

So it should be interesting to see if “Hocus Pocus 2” lives up to fans expecations. We’ve certainly seen what happened to the first one during its original release. So even if it isn’t a hit with them, history could repeat itself and the sequel could end up finding a new audience later on. We will just have to wait and see.

It’s been 29 years since someone lit the Black Flame Candle and resurrected the 17th-century sisters, and they are looking for revenge. Now it is up to three high-school students to stop the ravenous witches from wreaking a new kind of havoc on Salem before dawn on All Hallow’s Eve. 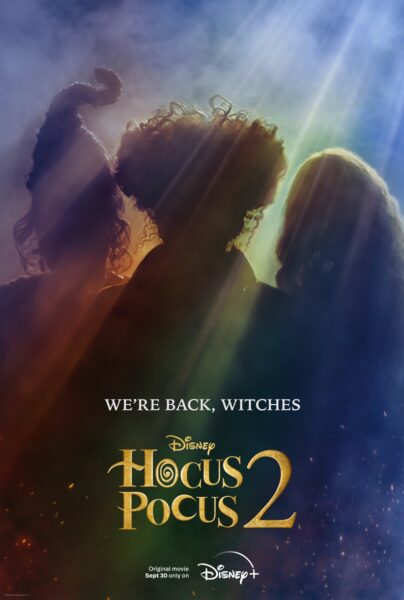