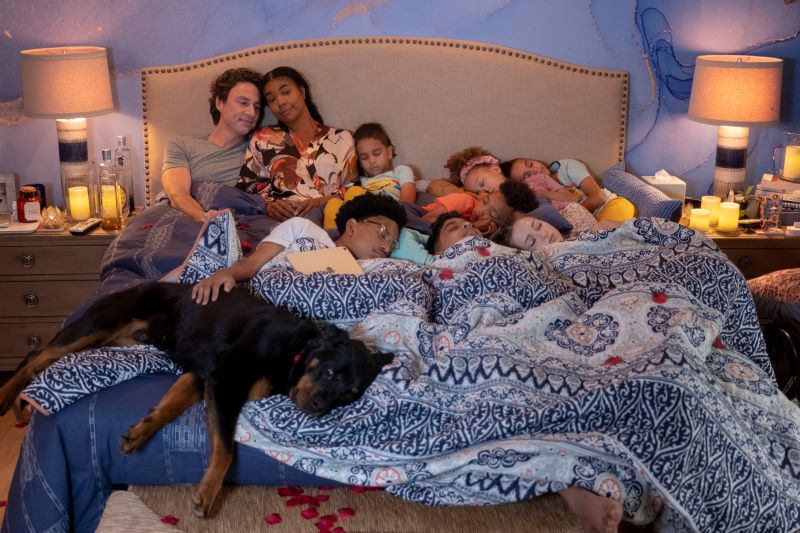 Disney+’s new version of “Cheaper by the Dozen,” directed by Academy Award nominee Gail Lerner, takes on a whole new meaning of mixed families. Previous iterations followed the same premise of the chaos and joys of living with a family of 12. But both were from a very vanilla perspective. So Lerner’s film takes a new approach by modernizing it, with two separate families becoming one blended family. And at the masthead are Zoey (Gabrielle Union) and Paul (Zach Braff), who confront any bias and stigmas that come with being a large family and the hardships growing up as a person of color. 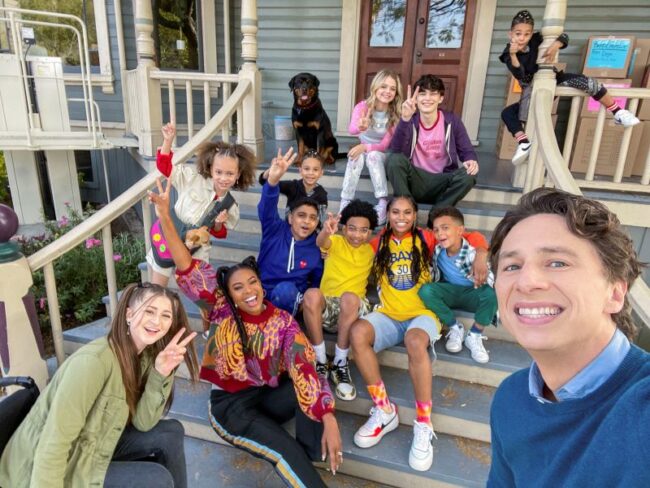 Films like “Cheaper by the Dozen” may be about these large families and the number of personalities from parents to children that encompass that idea. Still, the reality is this iteration, using a script co-written by Kenya Barris and Jenifer Rice-Genzuk Henry, celebrates those blended families and shows no fear in acknowledging the racial and social injustice marginalized parents and their children face. Unfortunately, while the hour and 47 runtime makes for a terrific family-friendly comedy, the film has too much to juggle, leaving much of the character development and story lacking.

The film opens with Paul (Braff) and Zoey Baker (Union), parents of separated families, becoming one after Zoey and her kids spend one serendipitous morning at Paul’s diner. The two eventually have children of their own, which takes the count to 11. Deja Baker (Journee Brown), Zoey’s daughter, is the eldest of the 11, is a high school basketball player with dreams of playing at USC. DJ Baker (Andre Robinson), Zoey’s son, is the nerd of the family who feels that his dad, Dom (Timon Kyle Durrett), doesn’t know him.

On Paul’s side, there’s the social media maven Ella Baker (Kylie Rogers), the punk rocker Harley Baker (Caylee Bloskenski), and godson Haresh (Aryan Simhadri). And together with Zoey, their family would grow with what the parents have aptly named, the littles, consisting of twins Luca and Luna Baker (Leo A. Perry and Mykal-Michelle Harris, respectively) and Bailey and Bronx Baker (Christian and Sebastian Cole). Later on, the Baker family would grow to 12 with the addition of Seth Baker (Luke Prael), Paul’s nephew, who comes from a troubled home.

And like the previous Cheaper by the Dozen films, the Bakers come from humble beginnings, with Paul and Zoey running a modest diner in Los Angeles, CA. While housing and money may be tight, the family couldn’t be happier. The parents speak highly of their children and share their respective dreams and aspirations while also throwing in a few friendly jabs. But as Paul starts to fall behind on their rent and their home becomes increasingly impossible to live in, Paul decides that it may be a good idea to sell the family’s secret breakfast cause, which is a combination of sweet, spicy, and savory. Sure, he may be selling out, but he believes that it will help the family in the long run.

While the film quickly establishes the family dynamics, it also introduces us to the exes. First, there’s Kate (Erika Christensen), Paul’s aloof and free-spirited ex-wife, who is at the Baker family home more than she should be. Then there, Dom, Zoey’s very successful ex-husband. As an NFL retiree, he can spend more time with his kids and play mind games with Paul as a father who can’t provide his kids with flashy gifts.

It’s certainly a welcomed sight to see a family-friendly comedy celebrate the beauty of blended families, even if we only get a few sparing moments with the kids. The film primarily centers on the parents and what they have to deal with when it comes to juggling responsibilities and how they received once they moved from their humble abode to the wealthier and whiter planes of Calabasas.

It becomes an exercise of patience for many of the characters, many of whom did not want to move for their justified reasons. However, the family, especially Zoey’s side, immediately feels out of place due to the color of their skin. Because they are Black, their whiter neighbors make it a point to call Zoey a babysitter or use Seth’s troubled past against them when there is an uptick in break-ins around the neighborhood. Meanwhile, Haresh is the target of bullying – which comes with its own problems when they use outdated material.

And things only get more complicated when Paul has to meet with investors, leaving Zoey to hold down the fort independently. That isn’t easy for her as she has to protect her children and herself from neighbors as the family patriarch leaves to fulfill his dreams in hopes of giving his family the happy life they deserve. As such, Zoey has to endure The judgmental looks, the unwarranted accusations, the bullying, and some of her whiter neighbors getting her name wrong constantly.

Of course, “Cheaper by the Dozen” follows this familiar sitcom-like formula where the severe problems they encounter get solved in a few minutes, and the comedy fills in the gaps. The slight levity to connect with its audience and adding in some drama certainly keeps things engaging. But because it follows such a formula, it feels like the film doesn’t go far enough.

Still, Lerner’s “Cheaper by the Dozen” is everything you’d expect to see from a remake of a family-friendly comedy. The unique twists here are that the film now centers on an interracial blended family. Sure, the film doesn’t shy away from the racism or injustice they face daily. Paul claims he understands what it’s like to be a parent of marginalized children and provides a solution in a way that only he could. But because these storylines are rushed, we don’t get to see that comprehension.

Even the problems that the characters face genuinely don’t get solved in a way that takes the situation seriously. And the hilarious antics can undercut the film’s message. Still, it has to work within the confines of the genre and the script. Ultimately the film feels like a blanket. It’s reliable, safe, and warm. There’s nothing wrong with that. But I wished it had done more.

The sitcom formula is familiar, with a loveable modern-day family that everyone can relate to but still be unique. Then they encounter a situation that gets out of their control. The drama only rises as high as it could within those familiar confines. Storylines are rushed. No one gets to shine as much as they should. And finally, everything is solved with no one getting that hurt.

But it’s not all bad. The characters are great. Braff and Union, who seem to be having a joy playing the parts of parents of a blended family, are the standouts. Those moments where they run a tight ship and run on a schedule are fun callbacks to the original, and the talk of wifi will resonate with today’s families. But they do it in a fun way that looks like functioning chaos. And with such a large ensemble, it is hard to follow everything going on. It’s only more complicated when there is no straightforward plot. It honestly feels like the film could have benefited more with sequels or launched as a streaming series.

While “Cheaper by the Dozen” plays it safe, it should be commended for at least trying to do something unique and different with its modern-day take on large families dealing with social issues and racial injustice. Sure, at times, a lot of that material feels ham-fisted, and they solve their problems as they will never reencounter it. But for what it’s worth, the ensemble works with what they were given, and while that may not be much, it does make the comedy a reliable and safe go-to flick for families.

“Cheaper by the Dozen” will premiere exclusively on Disney+ March 18, 2022