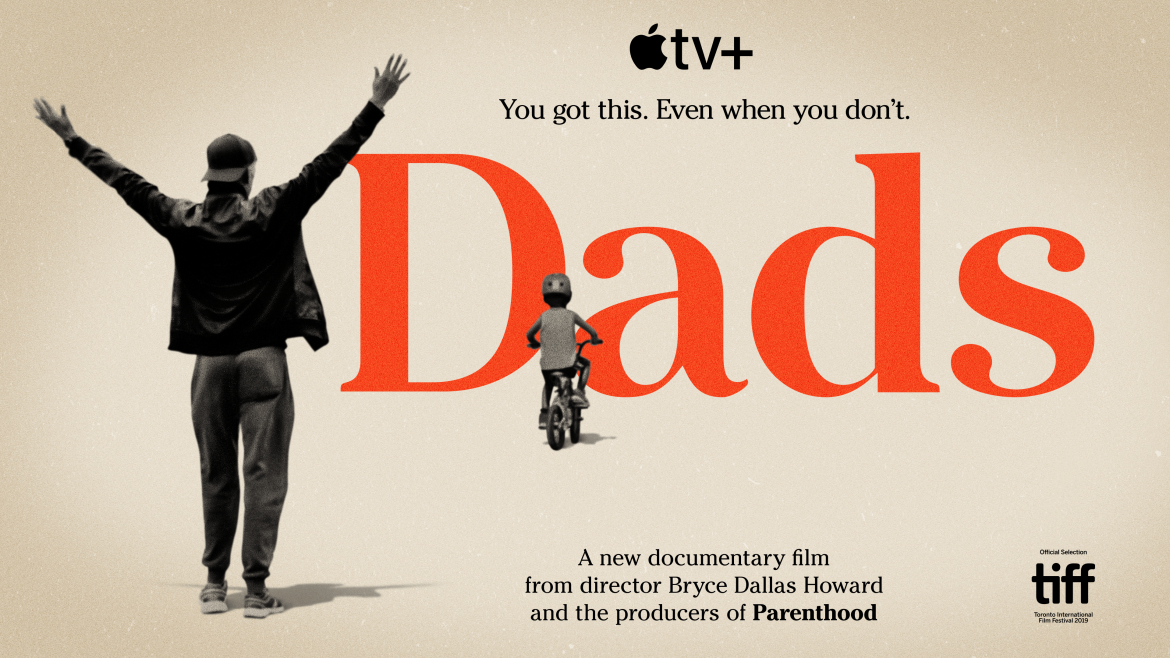 Bryce Dallas Howard’s Dads is a documentary that is also a love letter to the titular person that loves their child. But it has more depth to it than that. It shows that gender specifics and expectations no longer define the term. The role of dad has changed throughout the years, with some of them taking on a more maternal part as they stay home while their significant other goes to work, or how Black fathers are subverting archaic stereotypes of the absentee father.  No matter the race or creed, the one thing that hasn’t changed is the idea that a dad is a caretaker.

That message is pretty clear, and Howard wanted to be sure Dads wasn’t just any ordinary documentary, but something meaningful. ThatsItLA had a chance to join a video conference interview with Howard. During our time with her, she spoke about the new doc and what she learned about herself as a director during the process of making the film.

Though the definition of a father may be broad now, he is ultimately a caretaker. When asked about what is a father, Howard said, “A dad, to me, this was a question that was asked of me way back at the screening at the Toronto Film Festival. I think someone in the audience asked me, and I was like, ‘why have I never asked myself this question?’ And what I answered still holds true today, which is, a father in my mind is a caregiver.”

While Howard admits that isn’t quite the exciting answer people were expecting, she says the answer wasn’t meant to be eventful, and that being a father is “a given” and that “it is a daily thing.”

While Howards has some experience directing TV episodes and shorts, Dads is her documentary feature directing debut. And she describes the production of the project as “wild” because it was “one unexpected turn after another. And every turn has been a positive one.”

She found the project when it was brought to her by Justin Wilks, who said that Dove Men Care was looking to do a documentary on modern fathers. So, she took an interest and learned about the culture of fatherhood and how they are consistently, consciously or unconsciously, undermined when having a relationship with their children. That one meeting got her “fired up.”

“All the dads I know are amazing,” Howard said. “I haven’t come into contact with any father who is the least bit incompetent, or bumbling, or avoiding, or abdicating responsibility. No. These are the kind of fathers I strive to be.”

The documentary interviews comedians, who Howard sees as “modern day philosophers” and profiled fathers around the world, “who are doing the same thing but different.” But she never expected her brother to be a part of the film because he ended up being the expecting father portion that she needed for the documentary.

The documentary should resonate with many fathers who want to be closer to their children. Finding those dads to interview wasn’t going to be easy because there was going to be a risk of overlap in terms of lifestyle and parenting styles. “There were so many incredible fathers, and there were two aspects of filming that were utterly painful, and one of them was getting to narrow down the dads,” Howard said. “The other was needing to cut anything from basically Will Smith and so many of our comedians,” she joked.

Howard revealed that she connected to these fathers through the growing daddy blogger community. She wanted to give them a voice because they haven’t been given a lot of attention, and are in the background in the parenting conversations. “Each one of the dads has created a platform to connect with other fathers of other individuals who were committed to supporting fathers,” she said.

Dads covers a wide array of the different aspects of fatherhood through different races and cultures. Being a mother, Howard’s biggest takeaway from her experiencing making it is that “there is no rite of passage to becoming a father, though she may consider that a “negative takeaway” she brings up some valid points to support her claim. “It is the biggest event in your life other than your birth or your death,” she said. “Why is there no acknowledgement? You are just as involved as the mother. And there is a baby shower for the mother, and having been through it, that is an important moment.”

That lack of community where a father is not acknowledged, or there is no rite of passage, in 2020, shocked Howard. “That to me represented so much,” she said. “I spoke to Will Smith when he said there is no manual to becoming a father, but there should be.”

“This journey making this movie, in a way, became my little brother’s rite of passage,” Howard said. “He was talking to my dad. When I was filming that scene where my dad and my brother were in the basement, it was actually Ashley’s baby shower upstairs, and I was shooting it on my own upstairs. And I was thinking, ‘where are the boys?’ And so I went downstairs, and I saw them playing games downstairs. Pinball.”

That sort of exclusions did not mean these dads were not deliberately avoiding fatherhood or not totally committed to being a father. It was because they were not included in the celebration.

While a portion of Dads does feature an interview between the Howard children and their father, Ron, Bryce says she learned a lot more about fatherhood through her brother, who was expecting his child to come into this world. “I am definitely a daddy’s girl. I am the oldest. I got to be around the most of my siblings up until this point,” Howard joked. “And I forget sometimes my brother, who is six years younger, gets left behind a little bit. I heard my dad, so many times, say his biggest fear was that he wouldn’t be able to be as good of a father as his own father, which always really struck me because I tell him: “Dad you’re the greatest.”

But the thought also came as a shock to Bryce’s brother, Reed Cross Howard, who also shared the sentiment. All of that “captured the legacy of great parenting” as she put it. “I have always been so aware of what a privilege it was to have parents who are healthy and functional and really included my siblings and me in their lives in a way that showed us a lot of respect and really empowered us,” she said.

And if anything, Howard learned a few things about herself as a director making her feature documentary debut. “I’ve always known that I am someone who really values collaboration and the input of others,” she said. “I started teaching at NYU a couple of years ago and getting to do this film while I was teaching and being able to involve so many of my students behind the scenes was something that was totally unexpected and I absolutely treasured. At every single turn, they elevated the storytelling with their feedback.”

That sort of teamwork was something Howard appreciated, especially since none of her students, at the time, were dads.

“I think what I learned about myself is that I am someone who is deeply earnest, and I want to feel,” Howard said. “As an actor, I am that way.  As a director, I am that way. At one point, we were like, ‘we can call this Dads Cry.’ I really wanted this movie to be short, it is about 80 minutes, because it features so many ups and downs, and it is such a roller coaster. And that’s what it is to be a parent, and that is the ultimate human experience. The themes of family and parenting, and that relationship has been something that has existed in my dad’s work, and I don’t think that is going away any time soon when it comes to Howard movies.”

Bryce Dallas Howard’s Dads is set to make its streaming debut on June 19, exclusively on AppleTV+.