What a motley crew of a superhero team! I think Guardians of the Galaxy is one of the best adventure-action-sci-fi films to date. A harmonious blend of humor, menacing villains and an awesome team from the Marvel Universe that you’re rooting for right from the beginning of the film. Speaking of “rooting”, Groot is amazing! And he’s #1 on my top 5 list on why I love Guardians of the Galaxy.

1) I am Groot! I would hug this extraterrestrial tree any day (if he weren’t CGI that is). He’s Rocket Racoon’s tall sidekick and he repeats the same three words throughout the movie, “I am Groot”. He is loyal, ready to protect but don’t let his adorable smile fool you. He can be brutal. There is a line in the movie about him being the “Giving Tree”. That’s a good reference for Groot- He’s selfless, sensitive and will sacrifice his own life for his friends.

2) LOL! I’ve come to expect amusing lines in Marvel scripts but Galaxy of The Guardians is by far the funniest movie yet. Each character has a unique personality and sense of humour. Drax is fueled by revenge and takes things literally so metaphors go over his head. His response to that? “NOTHING goes over my head!… My reflexes are too fast, I would catch it.” HA!! 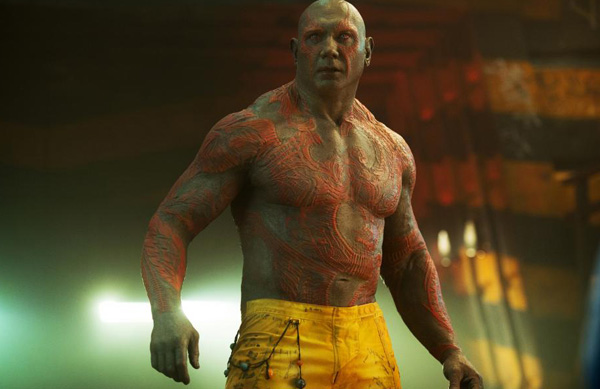 “Nothing goes over my head!”

3) Hooked on a feeling. There’s a 6th member of Guardians of the Galaxy and its the Soundtrack. The 70s tunes take on a life of their own. Star-Lord has been carrying around a cassette tape with these songs for most of his life and each song introduces major milestones in the films. “Cherry Bomb”, by the Runaways, is Guardians anthem. This is the first time we see the team assemble to take on Ronan. Buy it, play it, live it.

4) Female Heroine. Gamora is green, beautiful and an assassin. She was adopted, raised and trained by Thanos to be a weapon and is tagged the “deadliest women in the galaxy”. She turns on dear ole daddy Thanos after discovering his plan to destroy the universe. With the help of Star-Lord she relaxes her attitude and becomes more “Footloose” (you’ll have to see the movie to understand this reference). So we do see a bit of her feminine side. She has a wicked sister Nebula, who she gets to put in her evil place.

5) Lights, Camera, ACTION. The action and effects in this film are speculator. Chris Pratt looks awesome in Star-Lord’s outfit, his cool mask rivals fellow Marvel superhero Iron Man’s plus Star-Lord’s rocket-jet pack boots allow for some impressive dance moves. But Groot and Rocket Raccoon steal the show as far as effects. The duo are CGI and they look magnificent! Their wild screams and accompanying spray of bullets would make Al Pacino proud and this action really gets your adrenaline pumping! The animators and special effects team did a crazy impressive job creating the dark expansive galaxy.

I can’t help to think of “Say Hello To My Little Friend” from Scarface!

You don’t have to be a comic book fan to enjoy the film. You will be drawn in by all the characters and laugh your butt off! The movie is out of this world!

Guardians of the Galaxy is Rated PG 13 for intense sequences of sci-fi violence and action, and for some language.

* We attended a screening to facilitate this review. This is our opinion and your results might differ. Photos courtesy of Disney/Marvel.