Amazon and Blumhouse will be partnering up to launch an exciting new film program called ‘Welcome to the Blumhouse.’ This program will provide an exhilarating and provocative slate of original films for the first time on Prime Video and will debut in October, just in time for Halloween. 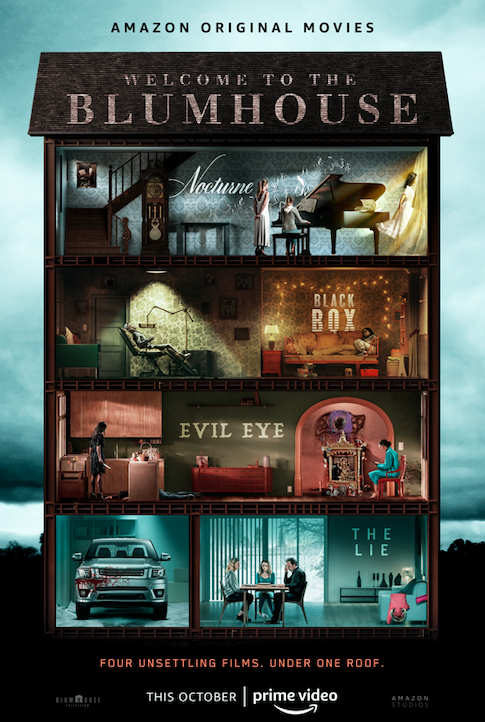 The launch begins on October 6, starting with four films, with the remaining four scheduled for release in 2021. Considering the uncertainty with the current pandemic, Welcome to the Blumhouse is the perfect way to watch a movie in the safety of your home. These films have the spine-tingling suspense that’s a Blumhouse signature. They will all have a “distinctive vision and unique perspective on common themes centered around family and love as redemptive or destructive forces.”

“This collection from diverse and emerging filmmakers was a thrill to put together with our wonderful partners at Blumhouse Television,” said Julie Rapaport, Co-Head of Movies for Amazon Studios. “These chilling stories have something for everyone – ready to fright and delight genre fans and newcomers alike – and we are excited to share them with our global Prime Video customers.”

“We’re beyond excited that the visions of these talented filmmakers will finally be seen by genre fans around the world, especially during this time when people are seeking to escape and be entertained. And we love the innovative idea of programming like the classic drive-in or repertory theater experience,” said Marci Wiseman and Jeremy Gold, co-presidents Blumhouse Television. “Amazon have been incredible partners, linking arms and supporting the creative visions throughout the process of making these films.”

What is great about this partnership is that it continues Blumhouse’s commitment to giving us quality films, on a budget, from talented storytellers. While the production studio has diverse titles, they are best known for their work in the horror genre. And based on these films in the program, there will be some chills running down Amazon Prime subscribers this coming October.

Below is a look at the four upcoming films from Welcome to the Blumhouse.

The Lie is written and directed by Veena Sud, and stars Mireille Enos (The Killing), Peter Sarsgaard (An Education) and Joey King (The Kissing Booth 2, The Act). When their teenaged daughter confesses to impulsively killing her best friend, two desperate parents attempt to cover up the horrific crime, leading them into a complicated web of lies and deception. Produced by Alix Madigan-Yorkin, Christopher Tricarico, and Jason Blum. Executive produced by Howard Green, Kim Hodgert, Jeanette Volturno, Couper Samuelson and Aaron Barnett.

Directed by Emmanuel Osei-Kuffour Jr. (Born With It) and script by Osei-Kuffour Jr. and Stephen Herman, Black Box stars Mamoudou Athie (Jurassic World 3, The Circle), Phylicia Rashad (Creed), Amanda Christine (Colony), Tosin Morohunfola (The Chi, The 24th), Charmaine Bingwa (Trees of Peace, Little Sista), and Troy James (The Flash, Scary Stories to Tell in the Dark). After losing his wife and his memory in a car accident, a single father undergoes an agonizing experimental treatment that causes him to question who he is. It is executive produced by Jason Blum, Jay Ellis, Aaron Bergman, Lisa Bruce, Marci Wiseman, Jeremy Gold, Mynette Louie, and William Marks.