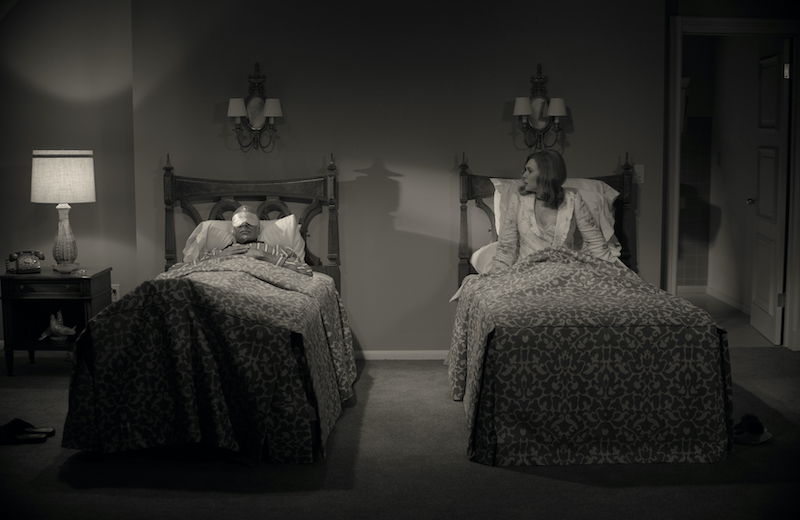 Marvel Studios has a history of incorporating several genres like buddy cop, political thrillers, high school angst, and fantastical to fit their respective titular heroes. Doing so has given depth to the Marvel Cinematic Universe so that there is something for everyone to enjoy while also threading several stories into one arc. As the studio expands into the TV world for the streaming age, they will be tapping into the unexpected TV sitcom genre with “WandaVision.”

Designed to be a love letter to the period sitcoms of old, “WandaVision” takes the MCU to places it has never explored by blending the silly gags and laugh tracks of the popular television format with a sinister but intriguing mystery and Marvel Studios flair. And unlike some of the previous Marvel shows, “WandaVision” is officially a part of the MCU Canon, so you know there will be flashes of the past mixed in with hints of an unknown future.

“WandaVision” stars our favorite MCU couple, Wanda Maximoff (Elizabeth Olsen), an enhanced human with powers like telekinesis, telepathy, and energy manipulation, and Vision, a density-shifting synthezoid with the ability to process information at an accelerated rate, morph into a human, and energy projection. They make for quite a lovely pair, which was hinted at throughout the MCU since “Avengers: Age of Ultron.”

But rather than recap what we already know about the titular duo, the first episode opens with the two entering idyllic monochromatic suburbia. Both try to adjust to their new lives while posing as a non-superpowered human couple, which seems a little bit easier for Wanda but somewhat tricky for Vision, who doesn’t eat and has to put on a human mask every time he leaves for work. The approach does present a little bit of a problem for those jumping into the show headfirst without any knowledge of the films.

That seems like a minor issue considering that most, if not the entire world, watched some of Marvel Studios’ offers. Though I suspect that there will be some repeat viewings so that nothing was overlooked. And I can promise you, there are some well-hidden clues that are subtle hints as to what the inspirations are behind “WandaVision.”

MCU aesthetics aside, you can see what Shaffer was going for in terms of making “WandaVision” completely different from any other MCU title. This genre-bending new chapter expands the universe by taking fans into the world of sitcom. And not just one particular sitcom, but for generations of it. Even though I only got to see the first three episodes, the show doesn’t shy away because it will pull all the tropes from a long history of TV sitcom.

The first episode is clearly inspired by “I Love Lucy” with a bit of “Bewitched” and “I Dream of Jeannie” because of the pair’s superpowers. The absent minded-housewife, along with the straight-arrow husband who has to deal with his wife’s zany antics jokes are all sprinkled throughout this first episode. But showrunner Jac Shaffer creates something that lets us know that this world is not what it seems to be. And it’s not just in the jokes about Vision being an android hiding amongst the human population or Wanda being a superpowered being. There are hints that something is very wrong, like “The Truman Show” kind of wrong, and both Wanda and Vison are at the center of it all.

So as the mystery starts to unravel itself slowly, “WandaVision” visits a different era of the TV sitcom with each new episode, going from shows like “I Love Lucy” and “Bewitched” to “The Brady Bunch” and “Mary Tyler Moore Show.” These transitions are marked by the shifts from monochrome to color and the production design and costumes. Various aspects of the story also see a dramatic change in tone and subject matter to reflect the respective period the episode is focusing on while also giving small clues as to the mystery of “WandaVision.” Not only that, but the show makes a fun commitment to it being a love letter to sitcoms while staying true to the spirit of the MCU as it adds commercials for household and vanity products from brands you may recognize if you’ve watched the entire MCU film slate.

MCU’s name aside and its commitment to the sitcom shtick, the show is an absolute delight because of its cast. Olsen and Bettany already have established chemistry that developed throughout the MCU, from “Avengers: Age of Ultron” and “Captain America: Civil War” to “Avengers: Infinity War.” Olsen’s Wanda seems to be much more relaxed, at least for the first few episodes, dealing with classic sitcom problems like preparing dinner for her husband’s boss at the last minute or dealing with her husband’s drunken stupor. But again, not is all as it seems, and she quickly snaps into something more serious when the situation calls for it. And yet, you wouldn’t notice these changes as Wanda switches back to the laugh track comedy without missing a beat. It’s no wonder that she can keep up with someone like Kathryn Hahn’s Agnes. More on her a little later.

One of the best surprises of this show is Bettany’s Vision. He has excellent comedic timing as he delivers punch lines and throws himself into slapstick situations like he has been doing for his entire career. And using a character like Vision lends itself well to a world like this because Shaffer can pull from characters like Samantha from “Bewitched” or Jeannie from “I Dream of Jeannie,” while also throwing in some of Dick Van Dyke’s Rob Petrie. The character then has to move away from that inspiration as it gets into episode three when were enter the Technicolor world that draws from “The Mary Tyler Moore Show” and “The Brady Bunch.” And the show doesn’t forget how complex a character like Vision is, so Bettany makes sure to not only bring out those nuances while also balancing out the changes from differing sitcoms.

Although Bettany and Olsen are absolutely terrific, the show is so much better, thanks in part to Kahn’s nosy neighbor Agnes, and Teyonah Parris’s “Geraldine.” Kahn is a walking scene-stealer as she gabs away at Wanda about the latest ways to seduce a man from a magazine she just read and her ability to have a three-course dinner just lying around. The energy is infectious, and one can’t help but be drawn into her orbit because its just so hilariously inviting. But like everything about this world, there is something strange about her. Though she keeps the truth about her identity close to the chest, there are a few moments where we see that she knows more about what’s happening than she is letting on.

And before Teyonah Parris makes her cinematic debut as Monica Rambeau in “Captain Marvel 2,” we will see her make an appearance as “Geraldine.” Honestly, it feels like they plucked Parris out of those period sitcoms and transported her to this time as she also gives her 110% to both the comedy and a slight bit of drama. You’ll see what I mean in episode 3. More importantly, “WandaVision” gives us a character who unapologetically Black, both in style and personality. Doing this shows just how Marvel is committed to its promise for providing more representation in all of the titles.

It’s true what Feige said about something like “WandaVision” being better suited for a television format because a story arc like this is better fleshed out in a 30-minute episodic format than something that is condensed in a two and a half-hour film. Not only that, but its weekly release format is an absolute treat as we can still have that increased anticipation while not having to wait months on end for new Marvel Studios content.

“WandaVision” is a genre-bending new chapter of the Marvel Cinematic Universe as it dives into the world of period sitcoms. Jac Shaffer has not only give us something that we’ve never seen before in the MCU, but he has also expanded it by weaving in an intriguing mystery with latent sinister vibes. Olsen and Bettany take us in this bold new direction that is full of nostalgic laughs and modern-day superhero suspense. And as impressive as the show’s execution is, one has to wonder what lies beyond the simple connections to the pending blockbuster sequels. I guess we will just have to wait and see. Guess that’s what makes the MCU so addicting to watch again and again.