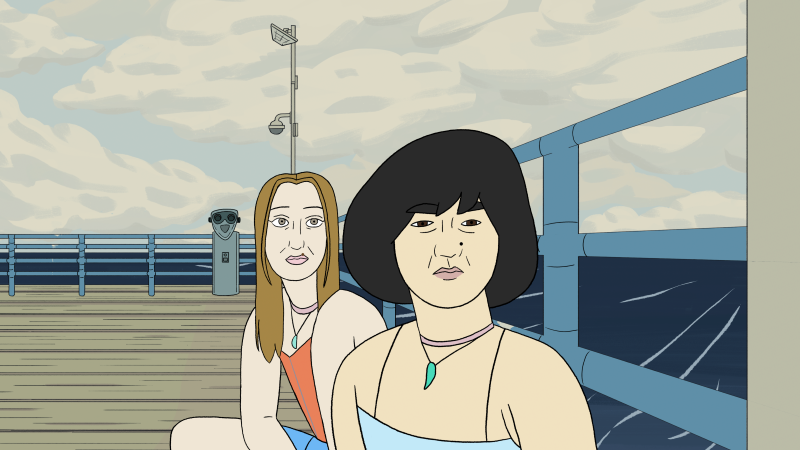 Hulu’s Pen15 is one of those comedies that dares cringe-worthingly good by  being bold and daring. Now the female-led comedy starring Maya Erskine and Anna Konkle as the middle-school versions of themselves dials all of that up with a new animated episode that’s set to premiere later this August.

For those unfamiliar with the show, “Pen15” is a R-rated “traumedy” set in middle school as it really happened in the year 2000. Anna Konkle and Maya Erskine play versions of themselves as thirteen year old outcasts, surrounded by actual thirteen year olds. In this world, seventh grade never ends and the pains of growing up are inevitable.

Sure the premise of adults playing as their middle school selves in a traumedy set in middle school may sound absurd and weird, but it works considering it’s mostly based on their experiences and as such it allows for a move believable story. And it is how the show sees the characters navigating those emotions that is the cornerstone of what makes “Pen15” work.

According to Vanity Fair, the episode titled ‘Jacuzzi’ is designed to be a standalone and acts as the debut of the second part of season 2. We got really excited about prosthetics. Before COVID, we were on the track. We were getting fitted for prosthetics; we had all these amazing digital pictures made of what we were going to look like. It was killing me, I was so excited,” Konkle says. “We had the choice when COVID happened: Should we try to wait and do this when things open up, or should we get this out sooner and just do it animated? We needed to be passionate about it being animated to do it; it couldn’t just be like second fiddle to the ideal. So we started digging in creatively.”

It’s an ingenious approach when it comes to bypassing the restrictions brought on by the COVID-19 pandemic. And considering how there’s a spike in variant numbers, I wouldn’t be surprise to see if more live-action shows decide to do at least an animated episode or two.

Here’s the plot synopsis for “Jacuzzi”

On vacation with Curtis, Anna and Maya are introduced to new crippling insecurities. The girls try to ignore them, but a mystical turn makes their self-doubt impossible to forget.