Jordan Peele redefined the horror genre with his eye-opening social commentary thriller “Get Out.” And he did that again for “Us.” Now he is about the reimagine the summer movie with “Nope.” And now Universal has released a featurette and a trailer that calls Peele’s third directorial effort “a cinematic event.” 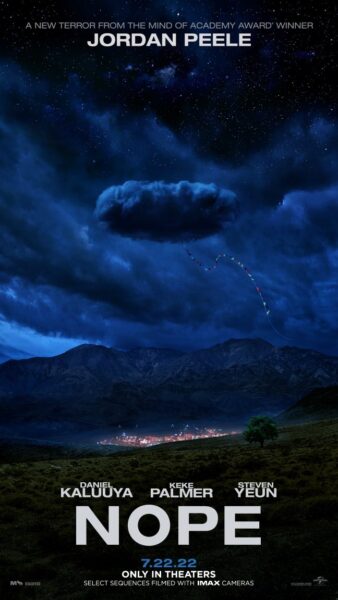 Considering how many of the characters in “Nope” are looking up, pulled to the sky, or have a shadow cast over them, it seems likely that the film deals with aliens. Both the trailer and the featurette tease a creepy gangling arm that reaches out to something. Although, we never see what that arm is attached to seeing how the body is out of the frame.

But much of the Nope’s plot remains under wraps. Of course, we can expect Peele’s latest film to be, yet another horror flick disguised as social commentary that addresses many of the societal issues regarding race and class that we face today.

The film reunites Peele with Oscar® winner Daniel Kaluuya (Get Out, Judas and the Black Messiah), who is joined by Keke Palmer (Hustlers, Alice) and Oscar® nominee Steven Yeun (Minari, Okja) as residents in a lonely gulch of inland California who bear witness to an uncanny and chilling discovery.

Nope, which co-stars Michael Wincott (Hitchcock, Westworld) and Brandon Perea (The OA, American Insurrection), is written and directed by Jordan Peele and is produced by Ian Cooper (Us, Candyman) and Jordan Peele for Monkeypaw Productions.

Written and directed by Peele, Universal has scheduled Nope for a July 22, 2022 release.