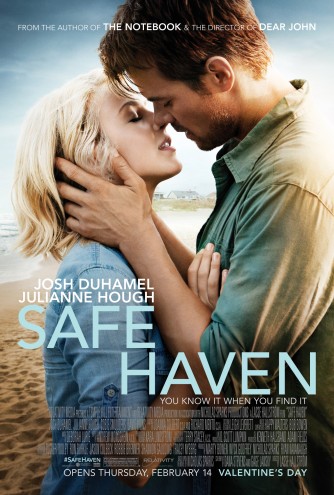 “The most proud you should be of yourself is by doing something that is out of your comfort zone, and taking that step and making that risk.” – Julianne Hough 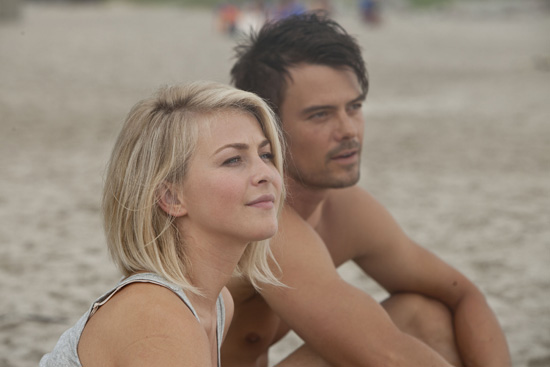 I have to admit, when I heard Julianne Hough was starring in Nicholas Sparks’ latest movie, I was intrigued to see what type of performance she would bring to the screen in her first dramatic role. Yes, she dazzled us as the youngest professional ballroom dancer, to win twice on Dancing With the Stars (2006 and 2007); sparkled with an all-star cast in her debut as Georgia in Burlesque (2010); danced to the beat of another drummer as the lead role of Ariel Moore in Craig Brewer’s big-budget remake of Footloose (2011); and played a believable “fish-out-of-water” Sherrie Christian from Oklahoma, hoping to sign a rock-and-roll record deal opposite Tom Cruise and Mary J. Blige in Rock of Ages (2012). But, playing the role of Katie Feldman, an abused woman on the run, in Safe Haven (2013) kind of appeared like a daunting task for the actress taking on her first dramatic role. At least… that’s what I thought.

After all, Hough’s dancing talent also earned the 25-year-old an Emmy nomination for outstanding choreography in 2007. Thanks to Hough’s singing “chops” on hit singles “Will You Dance With Me” and “That Song in My Head,” her self-titled debut album soared to No. 1 on the Billboard Country Album chart and No. 3 on Billboard 200 in 2008. Selling more than 67,000 copies its first week, and over 320,000 total copies, Hough’s first album was a solid success, and she hit the road on Brad Paisley’s 2008 Tour, appearing with Jewel and Chuck Wicks.

She says transitioning into acting was easy because she’s always loved the craft. During the recent Press Junket for the Nicholas Sparks (The Notebook, Dear John) romantic thriller Safe Haven, where Hough stars opposite sexy leading man, Josh Duhamel (Fire With Fire, Transformers), I had an opportunity to chat with the soon-to-be quadruple-threat Hough in a roundtable Q&A discussion table. Here, the dynamic talent admitted that landing the dramatic lead role was difficult, because she was up against a few prominent actresses.

“I was worried because it was definitely something that I had to go in with a lot of actresses that wanted it, and have done these kinds of movies before. So, it was a lot of fighting,” admits Hough. “I thought this was, for so many different reasons, the greatest film that I could have done after those movies because Nicholas Sparks is one of my favorite authors,” explains Hough. However, Hough is a serious Sparks fan. Not only has she watched all of his film adaptations, but she confesses to having read all of Sparks’ books with the exception of Safe Haven prior to shooting this film. In fact, the Sparks aficionado says she read A Walk to Remember seven times as a teen!!

“I am the demographic. So, to be a part of a film like this was huge. But, also, working with Lasse [Director Lasse Hallström], one of the main reasons why I took the film was because of Lasse. I knew that he is the most prestigious director I’ve worked with thus far, and I knew that he was going to push me, and help me grow,” Hough remarks. She adds, “It was a struggle to get this part because nobody had really seen me do this before.” More importantly, there’s a tenacious spirit about Hough that resonates. Sparks also spoke highly of Hough’s positive work ethics. He says that she always came to the set prepared and ready to give her all.

In Safe Haven, Hough has several emotional scenes calling for her to go into “dark spaces,” as an abused woman. Hough says she visited women’s shelters, speaking to the victims and counselors.

“It was also empowering because you see the growth that, when they first went to counseling to where they are now to what their struggles are. It was empowering to see their change, and to see them grow, too,” Hough says. “So, it was more about being uplifted from that and knowing that playing this role and playing this character: there is a light at the end of the tunnel.”

Hough says she also drew from family and friends’ circumstances in order to prepare for this role. The multidimensional actress says that for bringing the topic of domestic violence to the forefront was another reason why she fought to get this part in the romantic thriller. Hough credits Sparks as a genius for exploring great topics in all of his films, but Safe Haven, is an especially good film for everyone to see because of its themes on abuse.

“I think everybody deserves to be happy, and to have love in their life, whether it’s in a relationship or on your own. And, to be able to feel happy with who you are with,” Hough says. The film’s co-star adds, “My dad [Bruce] always told me that. He always said that, ‘Julianne, go to a hotel room by yourself on tour or doing a movie without your dogs and be happy with who you are.”

While sitting down and talking to Hough, I often forgot that she’s barely in her 20’s. Hough carries herself like an old soul – a woman with grace, wisdom, wit, and business sensibility. It truly felt like we were in the presence of a seasoned actress. Hough has the poise and charm of veteran actresses who’ve carried dozens of films, instead of the nouveau girl taking Hollywood by storm. This young woman knows what she wants and she goes after it! That’s why she isn’t bound by her talents. At 10, when most girls are attending neighborhood sleepovers, Hough accepted an opportunity to study performing arts in London at the Italia Conti Academy for five grueling years under renowned coaches Corky and Shirley Ballas.

During her time in London, Hough learned independence, responsibility, and determination! At 15, she returned to Salt Lake City, Utah and graduated high school. She then moved to Los Angeles to pursue her dreams of becoming an entertainer. Hough was hired as a dancer on ABC’s game show, Show Me The Money, shortly before joining the Dancing With the Stars tour company. She danced on the touring company briefly before being cast in the regular hit series during the fourth season. There, she hit gold being paired with two-time Olympic Gold Medal winner Apolo Anton Ohno.

Knowing that this was an emotionally-challenging film, I asked Hough which particular scenes she felt were the most difficult.

“It was after I decided to stay, after leaving the ferry, and going back to the house, and basically explaining what it felt like to be in that kind of relationship,” Hough remarks. She adds, “That was a scene where Lasse just said, ‘All right, there is no script in this scene just talk.’ That was an 11-minute scene. They didn’t cut. And it went from laughing to crying to, ‘Oh, I look really sexy right now,’’’ Hough explains. Again, Lasse is known for creating real-life sentimental moments, using improvisation. This is one of the biggest dramatic scenes in the film between Katie (Julianne Hough) and Alex (Josh Duhamel). Hough describes the scene as extremely intense, and probably the most emotional of the film.

Fortunately, Hough’s mom, Mari Anne, was in town during filming, and had the privilege of watching the playback of Hough’s performance.

“She’s like bawling at playback and stuff. It was fun,” Hough says proudly. She says her whole family plans to attend the movie premier.

Known for being a risk-taker, Hough contemplated on her past decisions and offered up advice to other women. She admitted to being both afraid and reluctant about moving back to the U.S. when she was 15. Hough had won the Junior World Latin Championship and International Latin Youth Championship dance competitions at the Blackpool Dance Festival. Although Hough was heavily competing in numerous ballroom events, she longed for something different. And, after much reflection on her accomplishments, she began to think of her 34-year-old sister who recently changed professions and is raising six kids. Hough acknowledges being afraid of returning to Utah from London at 15, because dancing was all she had ever done. She says she reminded her sister of that recently when they spoke about change and transitioning into new opportunities. Change is the biggest decision a person can make.

“The most proud you should be of yourself is by doing something that is out of your comfort zone, and taking that step, and making that risk. Or, taking that risk because you never know if it’s going to work out or not,” Hough says. She adds, “But, you’ve got to believe!”

Hough says another one of the biggest risks she took was leaving ABC’s Dancing With the Stars because she was comfortable with the show. However, she also had a burning desire to act, sing, and begin her humanitarian and philanthropic endeavors and charities. Such benevolent efforts include participating in the Susan G. Komen Foundation, Clothes Off Our Back, St. Jude’s Children’s Hospital, and serving on the American Red Cross National Celebrity Cabinet. The actress also works with various animal organizations.

As a savvy entrepreneur, Hough has her hands on a diamond mine. Her latest venture is near and dear to her heart and feet – SOLE SOCIETY, www.solesociety.com, is a fashion foreword shoe line. Ranging in styles from wedges to ballet flats to platforms to boots to sandals – the shoes come in a variety of colors at prices starting at $49.95.

“What I love about SOLE SOCIETY is that they’re super, super fashion forward. A lot of these shoes from major designers that we’ve kind of created into our own but that are kind of in that perfect price range,” Hough explains. She says the line is definitely colorful and trendy, yet more mature than a young teen shoe. “But they’re still in that good price range. So, I love that,” adds Hough, who’s now exploring a lifestyle line of clothing.

Along with reading scripts, Hough is also developing projects of her own with other writers. There’s no doubt in my mind, she will have a busy slate for many years to come. She’s currently attached to the film, Time and a Half. Hough’s onscreen transformation during several improvisation scenes changing from an abused, guarded woman to one completely liberated, loving self and in love, was remarkable thanks to the master direction of Lasse Hallström!

Julianne Hough’s SOLE SOCIETY (www.solesociety.com) debuts Feb. 11, 2013, offering a chic assortment of reasonably-priced styles to flatter any feet – from booties to wedges to platforms. The shoes come in a rainbow of colors – prices start at $49.95 to $69.95. 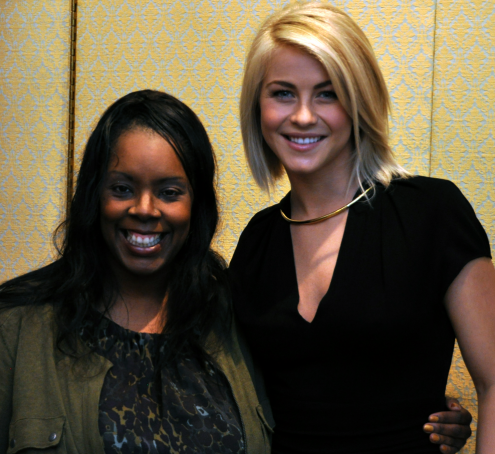 Penny with Julianne. Hough carries herself like an old soul – a woman with grace, wisdom, wit, and business sensibility.” – Penny, ThatsITMommy.com

* We did not receive monetary compensation for this post. Penny attended the press junket to facilitate this review. This will in no way sway our opinion of the product or service.  The review is in our own words and is our opinion. Your results and opinions may differ. 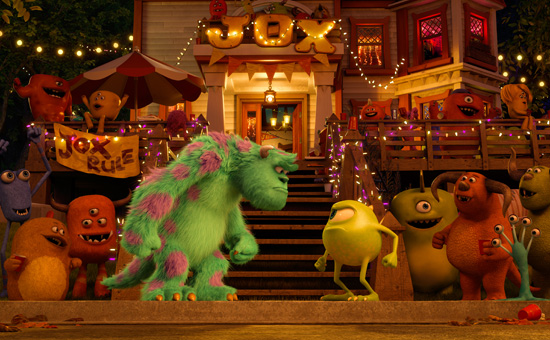 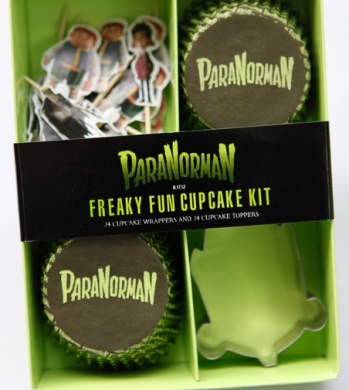 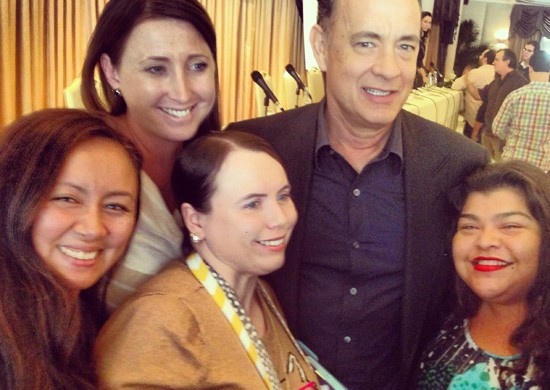 I think she’s gorgeous and I can’t wait to see this movie!

I love how thin she is! This movie sounds like it’s going to be pretty popular. Will definitely be watching it.

I’m not a Sparks fan (well, I haven’t read any of the books) but sounds like she will be amazing in this movie.

Good interview! I loved her in Rock of Ages (seriously, I watched it twice on a flight).

Reply
#SafeHaven Josh Duhamel Explains Why the Little Things Do Matter February 12, 2013 at 7:22 am