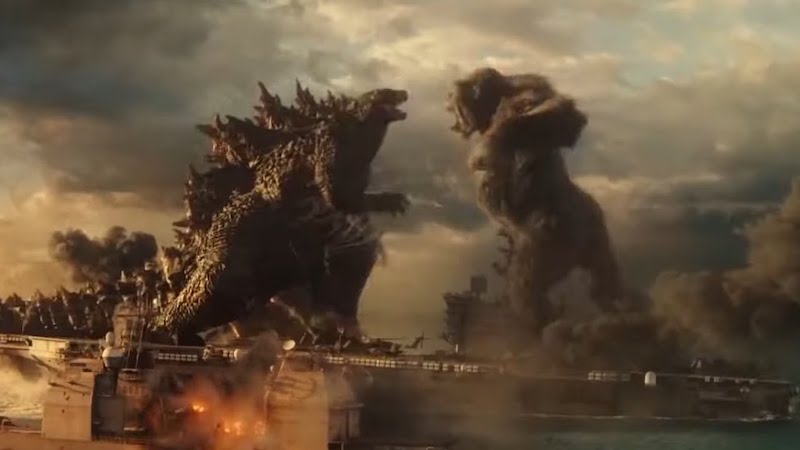 This year, Warner Bros. Studios brings major blockbuster action to the theaters and the comfort and safety of audiences’ homes. While seeing it at home saves on time and gas, it isn’t quite the same as seeing it in a theater. That being said, these are very strange times, and we could all use some exciting escapism. And that doesn’t come any bigger than “Godzilla vs. King Kong.” The studio dropped the first trailer for the upcoming film, and if it is any indication, this is will be an epic battle between two iconic Kaijus.

The trailer teases a few epic bouts between the two title Kaiju that take place either on an aircraft carrier or in the middle of a neon metropolis. Both look like they were pulled straight out of a King of the Monsters fighting arcade game. And though there will be a few battles between the two, it looks like the trailer teased a few other beasts we haven’t seen in any of the previous films.

And as much as we want it to be just about Godzilla and Kong, the film grounds itself – at least as much as it can with a story like this – with a human perspective. That comes from some familiar faces like Millie Bobby Brown (“Stranger Things”) and Kyle Chandler (“The Wolf of Wall Street”), both of whom are trying to understand why Godzilla, who has fought for the humans in his respective films, until now, has turned against them.

Then there are those in Kong’s corner, like Jia, a young orphan girl who has a bond with Kong and is the only one who can communicate with him. In turn, Kong acts as her protector. So it appears that the fate of the world rests on her ability to convince Kong to fight for the humans.

Here is the official plot synopsis for “Godzilla vs Kong:”

‘Legends collide in Godzilla vs. Kong as these mythic adversaries meet in a spectacular battle for the ages, with the fate of the world hanging in the balance. Kong and his protectors undertake a perilous journey to find his true home, and with them is Jia, a young orphaned girl with whom he has formed a unique and powerful bond. But they unexpectedly find themselves in the path of an enraged Godzilla, cutting a swath of destruction across the globe. The epic clash between the two titans—instigated by unseen forces—is only the beginning of the mystery that lies deep within the core of the Earth.’