Top Posts
LUCK Has Plenty of Heart and Likable Characters
Jenny Slate Talks “Marcel The Shell With Shoes...
TRON Night On The Grid Panel At The...
Bullet Train: No Holds Bar Funny Action-Filled Bloodbath
Go on a “Journey Into Storytelling” at The...
Home entertainment 7 Reasons To See Disneynature Monkey Kingdom With The Kids
entertainmentQ&A 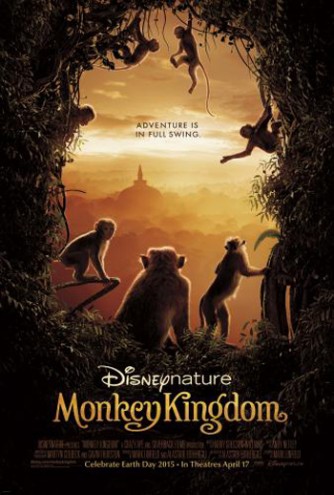 Monkey Kingdom is a marvel of modern filmmaking. The cinematography, as well as, editing is brilliant. The stars of the film are the toque macaque, monkeys who who live deep within the jungles of Sri Lanka (southeast Asia). The film crew follows a female monkey named Maya, who is at the bottom of the social class. Her world changes when her son, Kip arrives. Like all parents, she wants the best for her son and takes measures into her own hands to change their destiny.

My family adores this movie. It is a nice break from all of the high-action, CGI films we’ve been seeing. Monkey Kingdom is beautiful, educational with a dash of humor. nature vs humans. Here are 7 reasons why you should take your kids to see this documentary on nature vs. humans:

Prior to this movie, I was unfamiliar with this breed of primate. Viewers learn about the social order of a group of toques which usually consist of 20-50 monkeys. We learn about the advantages of being born into privilege, as well as, the sad disadvantages of being lower in rank. Their diet consists of fruit, termites, flowers and cake if they can get their hands on it. We also learn that they can swim! They all seem to have light brown hair, with a hair cut reminiscent of Moe from the “Three Stooges.”

2. Journey to the island country of Sri Lanka

Wildlife documentaries are a nice introduction for kids to experience the nature’s outer rim. In Monkey Kingdom, viewers are taken on a journey to the rural ruins within the jungles of Sri Lanka. Stunning. We also get a glimpse of city life with only a glimpse of humans. The monkeys and the lush landscape shine in this film.

3. Who can resist the babies?

The baby toques are adorable. You’re cheering them and hope that they survive the harsh obstacles they face. All mothers wish they could freeze their child in time. The baby stage is a wonderful time and it passes so quickly.

4. Peacocks, dogs and terminates, oh my.

Not only do you see monkeys in this film: Bear sloths, elephants, monitors, peacocks and even stray dogs make appearances. It’s interesting to see different animals co-existing, playing and avoiding each other.

Tina Fey does a super job narrating the film. She adds humor to the film, especially during a scene when the monkeys raid a human’s birthday party. Just like human kids, the monkeys were rambunctious and things raced out of control. Monkeys like to monkey around, binge on anyth

ing they can get their hands on, and leaving their mess for someone else to clean up after!

Like humans, these monkeys have to conquer adversity. They struggle to feed their young, protect themselves from the dangers of society and are loyal. Maya would do anything for her son and her perseverance, judgement and strength brings her family up the food chain.

See MONKEY KINGDOM opening week (April 17-23) and Disneynature will make a donation in your honor to Conservation International to help protect monkeys and other endangered species in their natural habitats. Learn more about the film here: http://nature.disney.com/monkey–kingdom.

* We attended a screening of Monkey Kingdom for editorial purposes. Opinions are our own. Photos courtesy of Disney/Walt Disney Pictures/DisneyNature